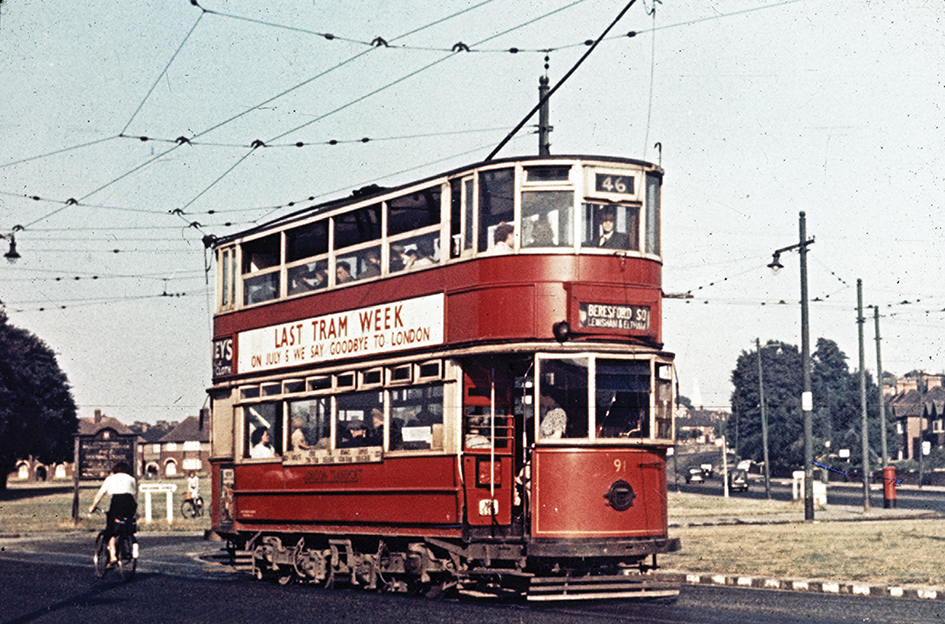 The Last Tram Week – the League was set up to fight the withdrawal of trams in London. Image courtesy of LRTA archive.

Anniversaries are occasions for looking both backwards and forwards,” so wrote J. Joyce in the 300th edition of the Modern Tramway in December 1962. So as we celebrate the 1000th edition of what is now affectionately known to readers around the world as TAUT, what are the lessons that 1000 issues, six name changes and 12 editors teach us?

Firstly, that the original purposes of the Light Railway Transport League (and Light Rail Transit Association since 1979), namely the advocation of street tramways and light railways, are as apposite today as they were in 1938 with issue No. 1. Back then, the prospects for tramways in the UK were bleak. A Royal Commission had recently pronounced tramways obsolete and over 40 towns and cities, including my own home town of Rochdale, had ripped up their systems and replaced them with buses. This trend continued after World War Two, resulting in the virtual extinction of street tramways in the UK and many other countries in the western world. A handful of survivors, including Blackpool, kept the faith.

Secondly, we are mainly a body of volunteers, described in the 100th edition (April 1946) as: “That the League, which in 1938 was a very small body, and doubtless regarded by many as a small ‘crank’ organisation which would not last very long, should have defied its critics not only by obstinately remaining alive but also by constantly gaining in strength and influence, is we feel no small tribute to the soundness of the objects for which we stand.”

Those early volunteers produced a monthly newsletter that was decidedly international in outlook (the second edition carried a report on the Chicago Surface Lines) and professional in its content. This has built up the reputation and membership of the Association to the point where currently half of its members reside outside the UK, and TAUT is read by politicians and professionals at the highest levels.

Changing with the times

How we communicate has also evolved. Many people now read TAUT as a digital edition and during this pandemic the LRTA’s meetings have gone virtual. Yet through its publications, study tours, meetings, and advocacy, the Association holds a proud standing as a ‘go to’ organisation for information and advice on light rail.

A glance at this month’s edition shows that in practice with two articles on UKTram’s new LRT route map by Centre of Excellence Chair Colin Robey and the LRTA’s own Technical Director Tim Kendell. On my desk as I write is our submission to the UK Transport Select Committee’s Call for Evidence on zero-emission vehicles and road pricing, offering regrets that the Inquiry is totally focused on private transport modes – i.e. cars.

The LRTA can rightly claim to have had an influence on the development of all the UK light rail systems, as well as many overseas. Many of our members have held, and continue to occupy, professional roles within transport authorities and industry suppliers and we have undoubtedly helped to change attitudes to rail-based city transport.

This month’s TramForward columns (page 179) also report on the planned expansion of the Edinburgh Trams system by an SNP Government and City Council – remember that not so long ago they were leading calls to curtail its development. We also continue our advocacy by supporting groups in Bath, the Fylde Coast and Kent, to name but a few.

We have also led on issues like the ‘Oslo Effect’ (now known as NEE 2.5), which is currently playing out in Westminster with a battle to enshrine in law legally-binding clean air targets. We’ve advocated the use of hydrogen-powered vehicles, and we’ve pressured Highways England to look at developing dual carriageways into mixed-mode corridors for both LRT and road transport.

Back to the future!

This is a story worth telling, and one that is far greater than can be covered in a single article, or even a single magazine. That’s why I’m delighted that the LRTA and Mainspring are putting together a new book on light rail for release later this year, telling of its sad decline and triumphant resurgence; a story which both members and subscribers of this magazine can rightly claim to have been part of.

As we move to a zero-carbon environment, more and more cities – from Cardiff to Casablanca, and from Nairobi to Nanjing – are turning to trams and rail-based, electrified transit modes. Far from being obsolete, this is very much a case of back to the future!