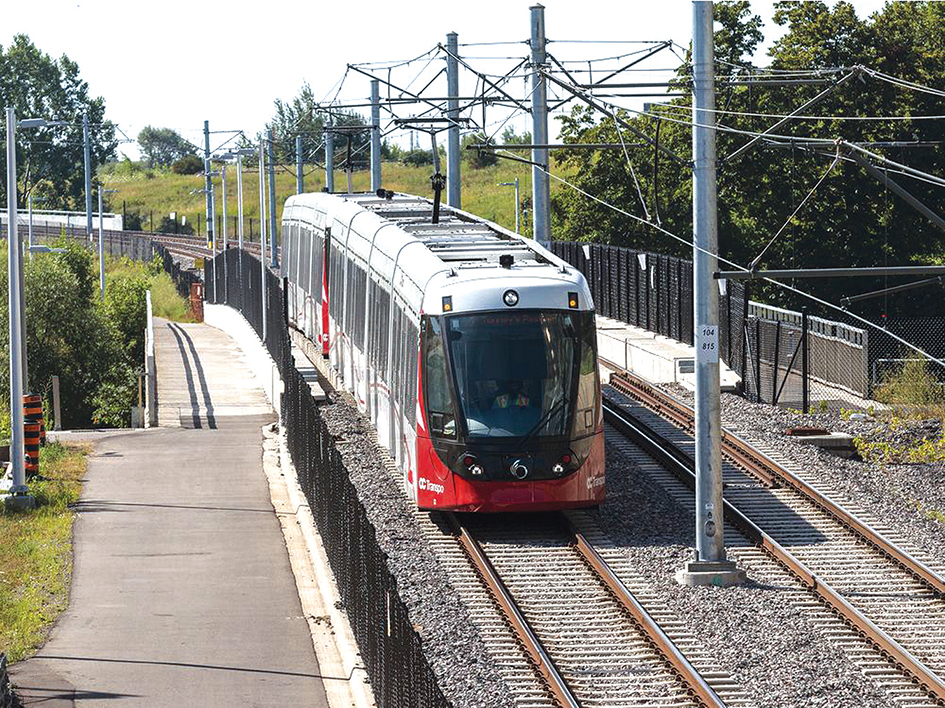 A coupled set of Alstom Citadis Spirit LRVs on the segregated Confederation light rail line in Ottawa that opened on 14 September. Image courtesy of OC Transpo

The segregated line, approved in 2010, includes a 2.5km (1.55-mile) subway – up to 26m under the city centre’s Queen Street with stations at Rideau, Parliament and Lyon. Finance of CAD600m (EUR400m) has come from the province of Ontario, with CAN1bn (EUR680m) from the Federal government and the remainder from the city.

Three weeks earlier, on 23 August, Ottawa Mayor Jim Watson had symbolically accepted the keys to the new line from the Rideau Transit Group consortium (SNC-Lavalin, ACS Infrastructure, Alstom and Scotiabank) awarded the contract to build the line in December 2012. The project has been bedevilled by construction delays and vehicle issues, and missed a number of previous handover deadlines. RTG was reportedly penalised CAD4m (EUR2.7m) for late delivery, but the extra time has cost the city CAD34m (EUR23.3m) as it had to keep its redundant bus services running.

The service runs from 05.00 to 01.00 Monday-Thursday, extended to 02.00 on Friday and Saturday. Sunday operations run 08.00-23.00. There is interchange with the diesel-operated Trillium light rail line at Bayview.

A fleet of 34 double-ended 48m low-floor Alstom Citadis Spirit LRVs (a similar configuration to the European Citadis Dualis, but adapted for the extreme Canadian winters) have been procured at a cost of CAD400m (EUR274m), and peak service requires 15 two-car trains operating from Belfast yards on the city’s east side. The LRVs were assembled in Ottawa from components supplied from Alstom’s factory in Hornell, New York (US).

Work has already started on a CAD2.5bn (EUR1.7bn) project to extend the line at both ends, including 24 new stops. The two extensions are the responsibility of the East-West Connectors consortium, led by Kiewit and Vinci Group, with design services provided by WSP Canada and Hatch. This includes a 10km (6.2-mile) eastern prolongation from Blair to Place d’Orléans – with the option of a further 3.5km (2.2 miles) to Trim Road – and west from Tunney’s Pasture for 13.5km (8.4 miles) to Bayshore and Baseline, hopefully for completion in 2023.

Thales supplied its SelTrac CBTC system for the first stage, winning a second contract from the consortium responsible for the two extensions. A further 38 Alstom LRVs will be supplied by 2021, and Belfast yards will also be expanded.