In December 2018 the pattern of major metro openings in Chinese cities continued with over 372km (231 miles) of new routes opening to passengers in ten cities. Although slightly down on December 2017 (388km/241 miles), again the majority of the new infrastructure opened between 24-30 December, although the first opening was a short 1.5km (0.9-mile) extension of line 1 in Tianjin on 3 December. Six lines are currently operational in this northern city, with seven more under development.

Two days beforehand, three extensions opened in the central cities of Xi’an and Chengdu and the eastern port city of Qingdao. Xi’ian’s new line 4 runs underground for 35.2km (21.9 miles) to connect the new high speed rail hub at Xi’an Bei (North Square) with Hangtian Xincheng via the main station. There are currently 29 stations, with another to open this year. The line uses 45 six-car trainsets, with end-to-end journeys of 63 minutes.

On the same day, the longest new line opened, Qingdao’s isolated 66.8km (41.5-mile) regional (Jiaonan) line 13 that runs from Jinggangshan Lu in the Huangdao district south-west along the coast to Dongjiakou. Designed for 120km/h (75mph)operation, this 21-station line runs underground for 14.3km (8.9 miles) with a further 54.5km (33.9 miles) on viaduct. All stations feature platform screen doors in common with the city’s other metro lines. A two-station north-eastern extension is planned to serve Qingdao Binhai University and Jialingjiang Lu, and a connection to the rest of the network is expected to open in 2020.

The megacity of Guangzhou gained three new routes on 28 December, providing service to the peripheral districts of Conghua and Zengcheng; every district of the administrative area is now covered by the metro.

The new 53.9km (33.5-mile) phase of line 14, with 13 stations, connects the Knowledge City line, opened in 2017 and previously standing alone in Huangpu District, with the rest of the city’s expansive system. Separately, the first 25.2km (15.7-mile) phase of line 21 runs from Zhenlongxi to Zengcheng Square, offering interchange with line 14 at Zhenlong. Meanwhile, the newest section of the Guangfo line that connects with neighbouring Foshan adds 5.5km (3.4 miles) to the east from Yangang and offers connections to line 3 at Lijiao.

The city of Wuhan opened a line 7 extension to Qinglongshan Ditiexiaozhen on 28 December, increasing its network by 17km (10.6 miles) to around 260km (161.5 miles).

On 30 December, two new routes to Beijing’s metro took the system to 636.8km (395.7 miles). Line 6 was extended by 10.6km (6.4 miles) from Haidan Wuluju to Jin’anqiao, while line 8 gained another 18km (11.4 miles) and 14 stations with a new southern section between Zhuzhikou and Yingahi and a short northern extension to the National Art Museum. These projects have reportedly increased capacity by 15% on both lines.

The Beijing Railway Construction and Management Co. has said a combined 260km (161.5 miles) of new lines will open over the next three years, doubling the pace of openings over the previous decade.

As well as a new tramline (see page 44), Shanghai opened two metro extensions on 30 December. A southern extension of line 5 from Dongchuan Rd to Fengxian Xincheng (14.6km/9.1 miles) reduces travel times into the city from the Fengxian district to an hour. Services now diverge at Dongchuan Road, with a branch heading to the Minhang Development Zone and the main route to Fengxian Xincheng.

The 16km (9.9-mile) south-eastern extension of line 13 from Shibo Avenue to Zhangjiang Road covers an additional 12 stations, four of which are transfer stations where passengers can change to lines 6, 7, 8 and 16. The extensions take Shanghai’s network to 705km (438 miles) and 415 stations.

Just missing the year-end, the first metro line in Jinan was inaugurated on 1 January. The capital of the eastern Shandong province opened its 26.3km (16.3-mile) R1 line between Fangte and Gongyanyuan; 16.2km (ten miles) and seven stations are elevated with 10.1km (6.3 miles) and four stations underground. Construction began in December 2013. 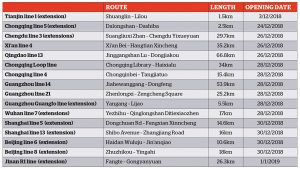