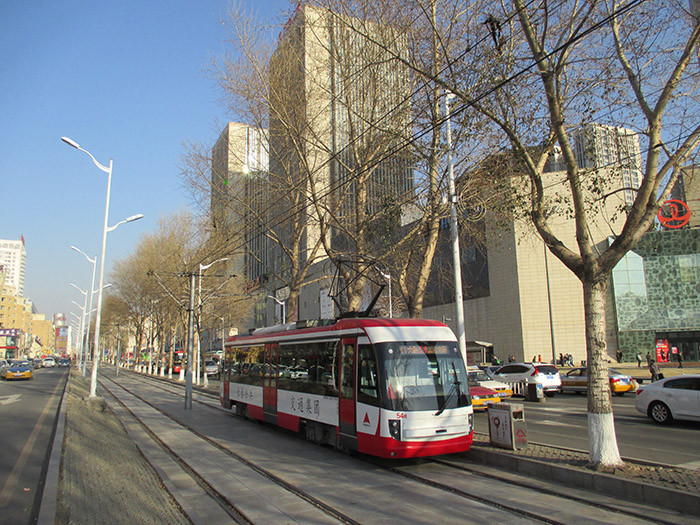 A line 54 service at Hongqijie in downtown Changchun.

I read somewhere that Changchun has been termed ‘China’s Detroit’, which is perhaps a little unkind. Sure, the city is part of the so-called ‘rust belt’ in north-eastern China, but it is still a huge city; neither beautiful nor particularly vibrant it is still highly populated and definitely not deserted or abandoned. Changchun is capital of China’s Jilin Province with around 8 million inhabitants.

The term ‘light rail’ in China is usually used to refer to elevated metros. This can sometimes lead to confusion: how do you classify a metro line that is partly underground and partly elevated?

Changchun is the nation’s only city that has established a ‘real’ light rail system: tram-like trains, running on exclusive routes – sections of both lines 3 and 4 are at-grade, elevated, and even underground. This makes it unique in China, especially as the system entered operation in 2002, a time when a lot of other Chinese cities discussed metro systems and did not consider tramway networks.

In fact, Changchun operates a modern light rail system as well as a heritage tramway: line 54 is the remainder of an extensive network constructed under the reign of the Manchuko Government and pushed by the Japanese, who supported the puppet state. It was put into operation on 11 November 1941.

Although lines had been decommissioned from the previous 53km (33-mile) network, and other cities in north-eastern China (Anshan and Harbin, for example) even took their tram systems out of operation, Changchun renovated line 54 in 2000 and applied modified rolling stock. On 25 August 2014, the network was even extended: line 55 was established as a branch line to the new Changchun West Railway Station.

The final terminus at the West Station is not currently in operation, but as of November is still under construction. The next stop is an 800m (0.5-mile) walk away, and lacking signage it is not easy to find. Only a cartoon-like map gives a hint of the station’s location.

Deserted as so many of China’s new suburban stations are, it is a lonely ride through the empty streets; road construction and track installation gives the impression that the routing for line 55 has been more of a spontaneous decision than a long-term plan.

The extended route towards the West Station lies in the middle of the six-lane highway with island platforms (previously the road was eight lanes wide, so has lost two lanes, presumably to allow for the new route), while the tracks for the original line 54 are alongside the roads, having side platforms.

Xian Dalu, the northern terminus of line 54, creates an interesting picture: the tracks run in front of a number of small restaurants, and while the trams are piling up at the turnback track, leeks and other vegetables are stored between the tracks. But passengers queue up and thus the trains, leaving every five minutes, are nearly full when they leave the station.

Both lines merge at Nanyanglu and proceed to the south-eastern terminus at Gongnong Dalu, which is at Hongqijie, one of Changchun’s main shopping areas.

As of the end of 2014, the tramway fleet is almost completely renewed; the vintage cars seem to have been taken off the tracks and replaced. The last remaining vintage trams, which can still be seen at the depot, are those purchased from Dalian. Since 2012, 46 new single-section trams have been commissioned. The tramway and LRT meet at Kuanping Qiao, the only interchange between the two.

The light rail network consists of lines 3 and 4, which form two semi-loops around the city and do not connect to any downtown areas. Both meet at the Changchun railway station, but do not allow a direct interchange.

In the north the two lines run either side of the railway station. Since 2012 passengers have had to walk through a humid, dim and almost abandoned tunnel.

To the south of the city, lines 3 and 4 have one transfer point, which consists of two stations: Linhejie on line 3 and Weixinglu on line 4. These are connected by a 200m passageway. Interchange stations are clearly not a strength of Chinese urban transit planners, based upon this example.

Vehicles are manufactured by CNR Tangshan (formerly the Tangshan Locomotive and Rolling Stock Works), using 70% low-floor bodies. There are two versions currently in use: a single-articulated version, and a longer version with two middle sections as well as two coupled sections. As of the end of 2014, line 3 is generally serviced by the single-coupled trains, while line 4 sees the longer vehicles more regularly used.

The seats onboard are all heated, a benefit as winters in this part of China can bring temperatures below -20˚C. Stations at-grade on line 3 look more like temporary facilities; but, by contrast, the elevated stations are massive structures.

An extension of line 3 from Changchun Station to Yongning Lu is under preparation. Further extensions with new lines for either the tramway or light rail system are not currently planned as the city is now focusing on metro development – two lines (north-south and east-west in direction) are already under construction. 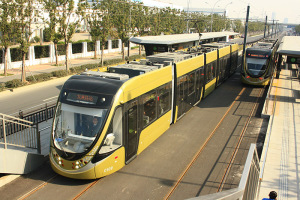 Rolling stock and stations are impressive, with modern design and passenger comforts.

Arriving from the metro, the signpost pointing out the new tram stop is so big it cannot easily be missed. A tunnel with a separate staircase leads to the terminus: a station created as an island platform with stylish stainless steel benches. The interior of the station is a friendly and fresh green colour and it appears that facility design was the key priority here, not so much the cost.

Each station is a massive structure, with construction following an obvious pattern to maintain continuity that includes either an overpass or an underground connection for passengers.No direct pavement access is possible, due to the fact that most of the route is in the road’s median, although one may wonder whether four staircases for underground connections is excessive.

All on-tram announcements are made in Mandarin, as well as the local dialect. This is unusual, as the central government is strongly promoting a focus on Mandarin. However, the new mode is proving popular, as even on Sundays the service is well frequented by passengers.

Rolling stock has been manufactured by CSR Nanjing Puzhen based on Bombardier’s 100% low-floor Flexity 2 platform. The trams are 32.2m in length and 2.65m wide. Their maximum speed reaches 70km/h (44mph), and each vehicle can accomodate 382 people.

Starting from an industrial zone, the trams proceed on reserved track. Soon the area becomes less built-up, but a temple can still be seen on the mountain – a view that probably cannot be enjoyed from many other lines around the world. The station at Yanshanlu is reached after a section where the line runs next to the street. A bridge with long ramps appears to deviate the tracks back into the median strip, with synthetic turf covering the structure between the tracks.

Distances between the stops become greater towards the western terminus, passing wide highways typical of China’s new city developments. The route passes many remote office buildings and new residential areas under construction. A few villa quarters can be seen from the tram, but residents in such exclusive housing are not necessarily using trams to get around.

Arriving at Longkang Lu terminus, the surroundings are scenic, but one wonders where passengers might come from in this remote area. The city intends to implement another five lines, with line 2 already under construction, and expected to open by the end of 2016. 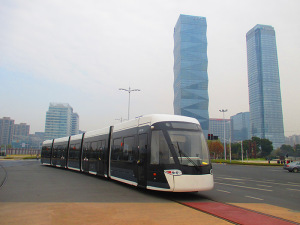 CSR-built 002 leaving Yuantong Station, one of two interchanges with the metro in Nanjing. The rolling stock for Nanjing’s Hexi Tram is another example of the technology transfer agreement between CSR and Bombardier signed in 2012.

Arriving at the underground station of line 2, there is nothing to indicate the direction to the Hexi Tram terminus at the Olympic Stadium East. Intuition leads me up a flight of stairs and along a route that ends in front of the tram; a white picket fence separates the station from the pavement. The western track is covered and used as a pavement as otherwise there wouldn’t be space for pedestrians around the exit of the metro station.

Inaugurated in time for the 2014 Youth Olympics in Nanjing, the Hexi Tram has been in operation since 1 August 2014. Beginning at the Olympic Stadium, next to Hexi’s Central Business District (CBD), the service runs alongside some interesting architectural oddities.
Hexi New City is part of Nanjing’s south-eastern Jianye district, currently one of the city’s urban development quarters. The route is 7.8km (4.8 miles) with 13 stops, connecting the Olympic Stadium, the International Expo Centre, and the Youth Olympic Village with Qinxinlu at the Fishmouth Wetlands Park.

The tramway runs on reserved track, mostly in the road median and in a few sections beside the road. To increase aesthetic appeal, rolled lawns have been set out along the route. Service frequency is surprisingly low: on weekdays the tram only operates every 30-40 minutes.

The trams operate free from the overhead catenary across the majority of the route, with charging available at each station as well as dynamically through regenerative braking. Hours of operation are 07.30-19.30 from Olympic Stadium and 06.45-18.45 from Qinxinlu.

Rolling stock is 100% low-floor, and is manufactured by CSR Nanjing Puzhen, based upon the Bombardier Flexity 2.

Currently there are two metro transfer stations: Olympic Stadium and Yuantong (both on line 2). Further interchanges to future metro lines are under construction, including Wuhao Jie and Pingliang Dajie.

During my ride on the system, three conductors rode on the tram, and two security guards accompanied us as well. After travelling around a third of the route, we left the built-up areas behind and entered areas of new development. Cars are rarely seen in these areas, even though wide highways with six or eight lanes have been provided. That’s China in a nutshell: in two or three years there will be huge residential compounds all around.

After 5km (three miles) of straight alignment, the route turns left and two stations later we reach the Fishmouth Wetlands terminus, where – a little surprisingly – there is nothing besides the Nanjing Metropolitan Tram offices, two highway bridges a kilometre away, and mossy grassland. But more surprisingly I saw ten senior citizens waiting to board the tram towards the Olympic Stadium who must have come from somewhere.

The park is part of the Hexi New City development, designed as a recreational destination for Nanjing residents during the warmer spring and summer months.

The Qilin Tram will soon join the Hexi Tram, running through the north-eastern city areas along a 9km (5.6-mile) route.