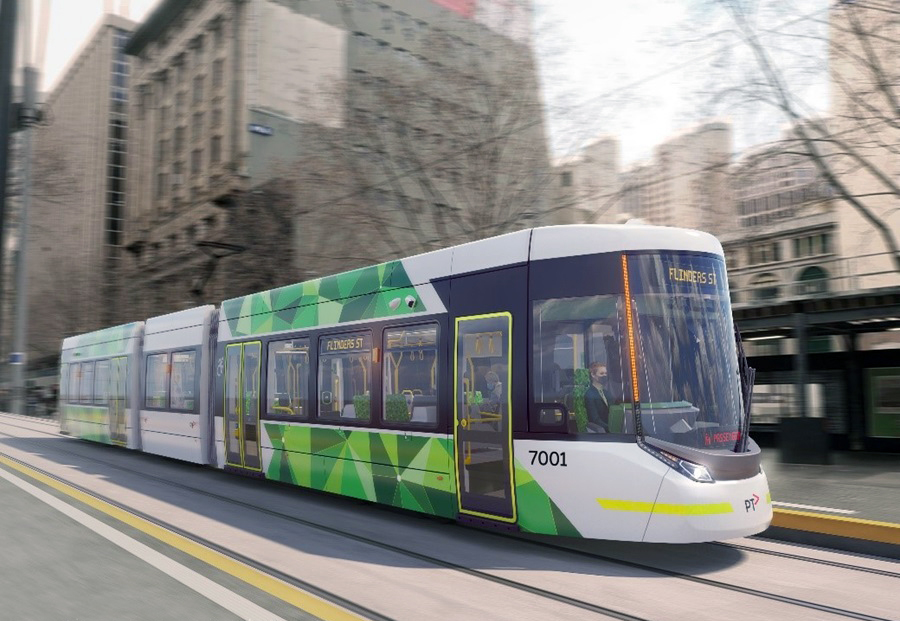 The Department of Transport for the Australian state of Victoria has signed a framework contract worth AUD1.03m (EUR700m) with Alstom to design, build and maintain 100 new trams for Melbourne. Based upon the Flexity 2 100% low-floor platform, the contract includes a 15-year maintenance agreement and is the largest single tram contract ever signed in Australia.

In line with traditional Melbourne practice, these seventh-generation trams have been given the G-Class designation and will be numbered from 7001. Designed to carry 150 passengers, the new 25m three-section trams (eight metres shorter than the latest Bombardier-supplied E-Class) will be able to run on tighter curves and therefore be used across the network. They will also be lighter, avoiding the need for the expensive infrastructure works required when the latest vehicles were introduced.

Other technical improvements include onboard energy storage and regenerative braking to limit current draw at peak times and reduce overall power use by 30-40%. This solves another issue associated with the longer E-Class trams; new or upgraded traction power substations were required on some routes when these were introduced. Upgraded HVAC systems will improve passenger comfort.

A step-change in safety and accessibility

Further customisation includes a design to limit impact damage from other vehicles and larger cab windows to improve driver sight-lines. Under-run protection will be provided as a further safety measure.

The final design is expected to be revealed in early 2023, following engagement with technical, accessibility, passenger, and driver representatives.

More than 1700 of Melbourne’s tramstops must be fully-accessible by December 2022 with the entire tram fleet low-floor by the end of 2032 under federal disability regulations.

Deliveries are to begin in 2025, allowing retirement of the city’s high-floor A-and Z-Class trams. Although their mechanical and electrical systems have been recently modernised under a AUD26m (EUR17.5m) programme, the A-and Z-Class cars date from between 1975 and 1987 and will be gradually phased out as new vehicles arrive.

Commenting on the award, Victorian Premier Daniel Andrews said the State Government had achieved “better value today than we’ve ever got because the rolling stock industry is strong and healthy.”

Creating a new depot in Maidstone

As the new fleet will be manufactured at the Dandenong plant, the contract includes a minimum of 65% local content (exceeding the state’s minimum 50% policy) and will support up to 1900 jobs across Victoria’s supply chain. Pre-construction activities to establish the production line will begin immediately, with work on the first tram to start in late 2023. The maintenance contract also includes 85% local content.

As part of a wider AUD1.85bn (EUR1.26bn) investment programme, a new depot and stabling facility will be built at the corner of Hampstead and Williamson Roads in the north-western suburb of Maidstone. Preliminary investigations at the site, formerly occupied by student accommodation blocks, have begun. Major works are to begin in 2023, subject to planning and heritage approvals. This project will create a further 280 jobs in construction, ongoing maintenance and the supply chain.

The detailed fleet allocation to other depots is under development in conjunction with other network re-organisation initiatives also underway.