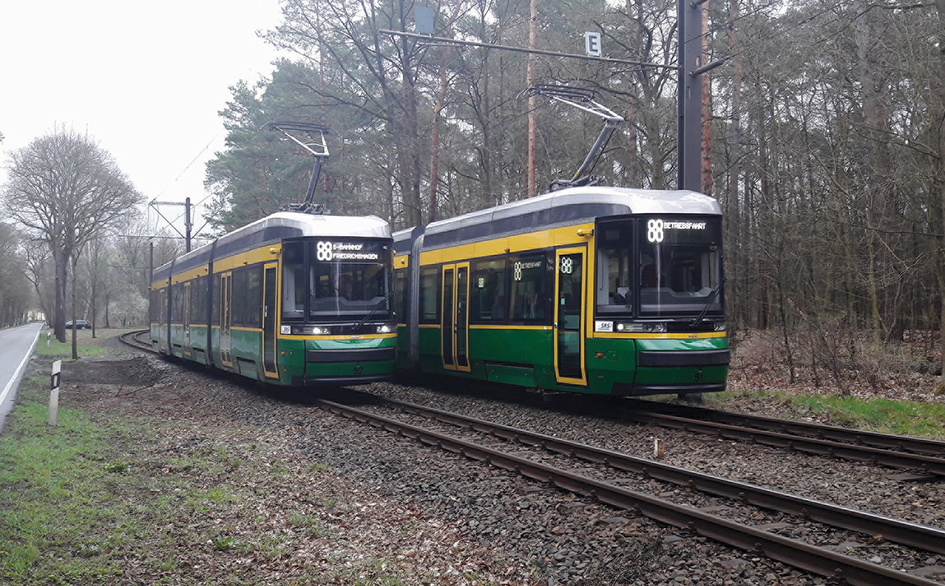 A decades-old car rumbles through a woodland backdrop on the outskirts of Berlin.

It rolls to a stop at a low platform shaded by trees. Waiting passengers climb its steps to enter and the vehicle sets off. It is a traditional scene – but this little cameo illustrates the problem facing one of Germany’s smallest tramways, not to mention other operations of differing sizes. For from January 2022 new legislation means that, with few exceptions, the country’s public transport must be barrier-free.

That is why, in recent months, that scene – with people clambering into a geriatric Düwag GT6 – has been replaced by step-free access into the most modern vehicles the Schöneiche-Rüdersdorfer Straßenbahn (SRS) has ever possessed – low-floor Škoda Artic prototypes that have moved here from Helsinki. The first arrived last year, the second in late March, and a third – this time a brand new rather than second-hand vehicle – is to follow.

Barrier-free travel is of course a noble aim. In Germany, it is legislated for in the Personenbeförderungsgesetzes (PBefG), which dates from 2013. As is well known though, the move to ensure accessible travel is not unique to Germany and in fact the PBefG implements a European Union Regulation, 1370/2007. Nor is this move a purely EU one: that legislation itself came the year after the holding of the United Nations Convention on the Rights of Persons with Disabilities, in 2006.

But important as such a move may be, it does present challenges for a small and historic organisation such as the SRS. The first section of this line opened in 1910, with expansion and electrification following shortly after (see below). Today running as ‘Tram 88’ in the Verkehrsverbund Berlin Brandenburg (VBB) tariff union, the SRS is the only metre-gauge tramway operating in the Berlin area.

As with the nearby Woltersdorfer Straßenbahn, the SRS could perhaps be seen as a bit of an ‘orphan’. For although coming under the VBB, it is independent from, and (not least given the gauge differences) unconnected to, the main Berlin tramway network. That is despite the two systems coming within 100m of each other at Friedrichshagen, the western extremity of the SRS. There, within a short walk, passengers can not only change from one tramway to the other, but also between tram and S-Bahn services at the Deutsche Bahn station that is served by S3 trains between Spandau and Erkner.

Given its semi-rural surroundings, developed to the east of Berlin in the late 19th Century, the SRS is an interurban in the classic sense. From the terminus on Friedrichshagen’s Schöneicher Strasse, where there is a turning loop, Tram 88 services initially run dead straight roughly north-eastwards alongside the main road before curving away into the residential area of Schöneiche. Shortly after passing the historic depot the line curves sharply to the east, the direction it largely maintains into Rüdersdorf. The portion to today’s terminus and turning loop at Alt-Rüdersdorf dates from 1977, replacing an earlier section that ran more to the north but which was lost to quarrying. In total, today’s tramway runs for 14.1km (8.8 miles), with 20 stops. End-to-end journey times are 28-29 minutes, with peak headways of 20 minutes.

Around 3400 people use the SRS each weekday; annual passenger figures are around one million, with the tramway operating roughly half a million timetable-kilometres. Service speed is 30km/h (19mph).

Since 2001 the SRS company has been 70%-owned by the operator Niederbarminer Eisenbahn AG, which also runs main line passenger services. The local communities of Rüdersdorf and Schöneiche own the remainder of the shares between them.

Acquisition of the Artics from Helsinki follows in a well-established SRS tradition of procuring second-hand vehicles. By 1990 when this former East German system became part of the newly-unified Federal Republic of Germany, the tramway was in need of significant investment. That included replacement of infrastructure and the adoption of used Tatra trams (initially KT4D, now all out of traffic, and KTNF6 from 2010), as well as ex-Heidelberg GT6 vehicles from 2006 onwards.

However, while the KTNF6 sets have low-floor sections, the 100% high-floor GT6 cars do not. More recently, with 2022 rapidly approaching, the SRS sought to acquire suitable low-floor vehicles to meet the barrier-free deadline. A visit to Helsinki was arranged with the initial idea of acquiring surplus Variotram units. However, while those were not deemed suitable, one happy coincidence of the reconnaissance was to bring the availability of the prototype Artics to the attention of the German operator.

SRS Operations Manager Sebastian Stahl explained to TAUT that these Finnish-built trams were considered a good fit; they are of the right dimensions, have a high percentage of seated space, and are equipped with bogies.

At 27.6m long, the three-section vehicles offer 87 seats (a welcome uplift of 35 compared to those they replace). All eight axles are powered, the Artics are fitted with regenerative braking and they take power from the overhead at 600V dc. Maximum service speed is 80km/h (50mph).

The prototype Artics were built in 2013, pre-dating series deliveries of this type from Transtech (now Škoda) by some three years. Their genesis dates back to a tender by Helsinki’s city operator Helsingin kaupungin liikennalaitos (HKL) for 40 vehicles in 2010; that was later raised to 99 through the exercise of options.

In 2018, then five-year old 402 arrived at Schöneiche to bring a modern face to this traditional tramway, which with its GT6s still relied in part on vehicles designed in the 1950s. Škoda Transtech formally sold the two Artics to the SRS in October last year.

When it came to certification in their new home, the SRS was aided by the fact that the Transtech design had been trialled at the Würzburg tramway (some 500km/310 miles south-west in northern Bavaria). That meant that German experience and paperwork already existed, allowing the acceptance process to concentrate on proving that the Finnish vehicles and the SRS infrastructure were compatible with each other.

Škoda supported the introduction of the low-floor vehicles to the SRS, and indeed in addition to trial running, a demonstration run for customers of what is now badged as the ForCity Smart was arranged to coincide with Berlin’s 2018 InnoTrans trade fair.

In fact, the SRS found that only minimal changes were needed to accommodate the ‘new’ additions to its fleet – in infrastructure terms it has meant some alterations to the historic workshop and to the line’s traction power supply.

On 24 October 2018, SRS Managing Director Detlef Bröcker was joined by Kathrin Schneider from the State of Brandenburg’s ministry that covers infrastructure and planning. After celebratory cake was given out and following the formal handover of paperwork at the depot in Schöneiche, the former Helsinki 402 officially entered public service; it is now SRS 52. Classmate 401 (the future SRS 51) arrived in March 2019 and entered passenger service on 1 May.

With the two Transtech trams in operation and supported by the partially low-floor Tatra sets, this unusual tramway survivor will be able to offer low-floor accommodation across its timetable for the first time.

That is not the end of the story however. On 3 April the local authorities of Oder-Spree and Märkisch Overland agreed to contribute to the acquisition of a third Artic. This will be a new series vehicle, acquired through piggy-backing an order for Helsinki, and is expected to join the fleet in early 2020.

Mr Brocker has described himself as happy that, through the arrival of the Artics, the SRS already fulfils the requirement for barrier-free travel. It comes at an opportune time as well: the Berlin area is one of the few in the former East Germany to see an increase in population – and with this it is considered that the commuting potential from Schöneiche and Rüdersdorf to Berlin has grown.

Total investment in the programme is around EUR3.7m, with 85% of that cost split between Oder-Spree and Märkisch-Oderland local authorities from a dedicated fund for public transport. Indeed, as
Kathrin Schneider explained on the launch of SRS 52, Brandenburg’s infrastructure ministry is investing an additional EUR37m in new vehicles and conversions between 2017-22 in order to realise barrier-free travel across the state.

The Schöneiche vehicles are also just the first of the Artic type to offer service in Germany; the SRS is one of three organisations in the country to have chosen them. Deliveries are also to take place to Saxony’s Chemnitz (14 ForCity Chemnitz) as part of an order won in 2016, with the first vehicle displayed at InnoTrans in 2018; and to Rhein-Neckar-Verkehr in the south-west of the country, with an order for 80 bi-directional vehicles having been placed last June.

Outside Germany (and not including Helsinki), Artics have also been ordered by Finland’s Tampere, as well as both Ostrava and Plzeň in the Czech Republic.

Just perhaps though, by bringing modern low-floor vehicles to its fleet, the SRS will be the tramway that most feels the effect of these trams from the north…

With grateful thanks to SRS Operations Manager Sebastian Stahl for assistance in the preparation of this article.