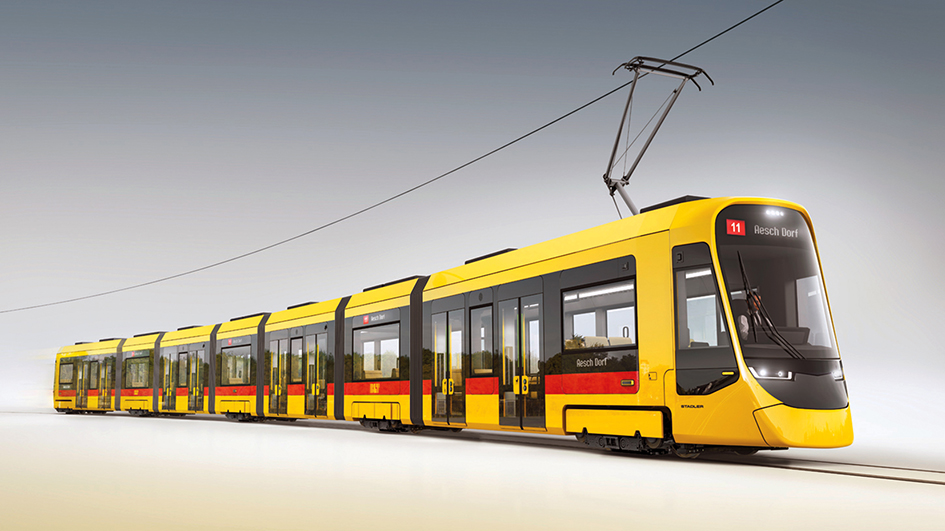 The new Stadler trams for Basel’s BLT will maintain the city’s reputation for elegant hardware. Image courtesy of Stadler

Basel’s inter-cantonal tram operator Baselland Transport (BLT) is to acquire 25 new 45.5m trams from Stadler in a CHF125m (EUR112.6m) deal. The vehicles will replace trams from the oldest design still in the current fleet, the 66 six-axle Schindler articulated vehicles that were built in 1978-81.

The Swiss city’s metre-gauge tramway services are provided in an integrated way by two different operators, BLT and Basler-Verkehrsbetriebe (BVB). City operator BVB runs most of the network, which serves the small canton of Basel-Stadt and two smaller local authorities. However, some lines have an international character, crossing the nearby borders to reach into France and Germany. Three lines, 10, 11 and 17, run over BVB track in the city, but were developed to provide cross-canton border services into Basel Land. These are operated by the yellow-red trams of BLT and have something of an interurban nature. Line 10 also crosses through France at the village of Leymen.

BLT currently operates a fleet of around 100 trams. More recent than the Schindler vehicles (44 of which were equipped with low-floor centre sections in 1986-99) are 38 Stadler Tango low-floor cars dating from 2008-12. The interior of these cars feature several sets of steps to higher-floor sections over three sets of motor bogies.

The replacement of Schindler trams is to begin with those not equipped with a low-floor section, which now mainly run only in peak periods. The Stadler order is for 100% low-floor Tina cars (an evolution of the Tramlink design) as ordered by Darmstadt in 2020. There is an option for a further 15.

The seven-section trams will be air-conditioned and feature four out of five bogies motored, so ten axles and eight double doors are provided. Like all Basel trams they will be 2.3m wide, and feature 96 seats and room for 160 standing passengers.

Note that one BVB line (14) is actually part of the BLT network, even though only BVB’s green trams operate its services. BLT has also recently taken over the Waldenburgerbahn as line 19, and is regauging it from 750mm-gauge to metre-gauge to match the rest of its network; a further ten Tramlink are on order to cater for that operation.

The latest rolling stock deliveries for BVB have been Bombardier Flexity cars.