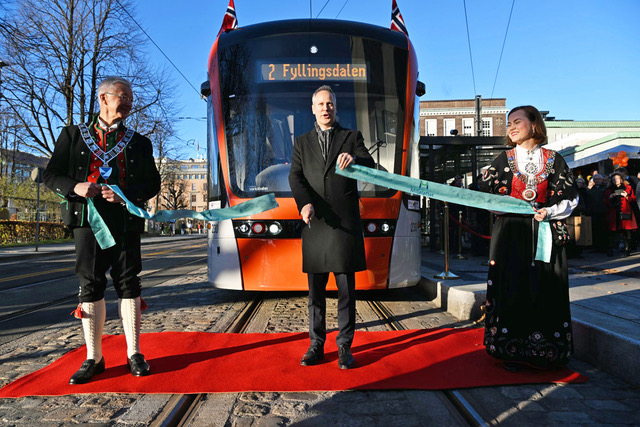 The opening ceremony for Bergen’s second tramline took place on 18 November, with passengers able to board line 2 trams for the first time on 21 November.

Starting in the Norwegian city centre at Bystasjonmen where it links with line 1, the 9km (5.6-mile) route runs via Møllendal and in tunnel to Kronstad via Haukeland hospital; a further 3km (1.9-mile) stretch follows through Løvstakken to the terminus at Fyllingsdalen. The new line has seven new stops with an 18-minute end-to-end journey time; trams run every 7-8 minutes, replacing bus line 14.

Bergen’s first modern tramway was opened in June 2010, linking the centre and Nestun, and was subsequently extended to Flesland airport (20.4km/12.7 miles). The decision to build a second line was taken in November 2014 and work started in spring 2018, with an estimated cost of NOK9bn (since increased to NOK10bn, roughly EUR0.95bn). The first test tram reached the new outer terminus in August 2022.

Plans are being developed for a third tramline, which would run north from the city centre 12.8km (eight miles) to Åsane. The scheme would include tracks along the World Heritage Bryggen quayside.

Bergen operated a first generation tramway from 1897-1965 and a heritage line has been built in the city centre to show what the old tramway used to be like.