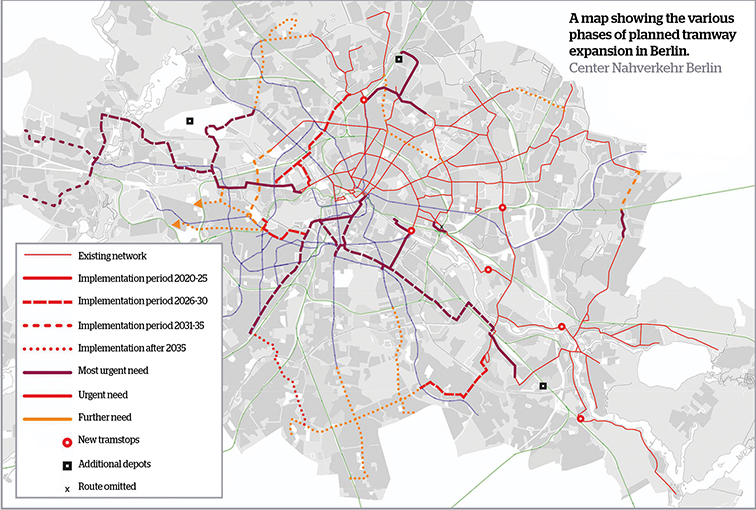 Further details of a proposed major expansion of the Berlin tramway network were uneiled in May. The programme, part of the BerlinStrategie Stadtentwicklungskonzept 2030 plan developed following the election of a ‘red-red-green’ alliance in 2016, includes the much wider return of trams to the western part of the city than had previously been planned.

The proposals were developed by Center Nahverkehr Berlin and the Berlin Senate; however, there has been ongoing debate over whether to favour tram or U-Bahn expansion, with opposition party FDP favouring the latter.

As yet there is no formal commitment to the financing implications from the parties involved – the Senate, transport authority Verkehrsverbund Berlin-Brandenburg, and Berlin’s transport operator BVG (Berliner Verkehrsgesellschaft).

Proposed routes have been broken down on the basis of priorities, with suggested delivery from 2020 through to after 2035:

No requirements for additional vehicles have been published, but new depots are proposed at Tegel (where the airport is to close once the under-construction Berlin-Brandenburg Airport opens), Blankenburg and Adlershof.

Tram supporting umbrella group Pro Strassenbahn followed the unveiling of the suggested expansion with more ambitious proposals of its own that would see further network growth, partly through the replacement of bus routes by tramway. Pro Strassenbahn’s programme runs to 2050, and particularly includes more routes in the west and south-west of the city.

Major tramway expansion in the German capital, particularly into the former West Berlin, has been discussed for a number of years. Whereas the tramway in the eastern part of the city survived the years of division following the building of the Berlin Wall in 1961, the last trams on the western side ran in October 1967.

Following reunification in 1990, trams made their way west in October 1995 as an extension of the eastern system, reaching the new Hauptbahnhof in 2015.