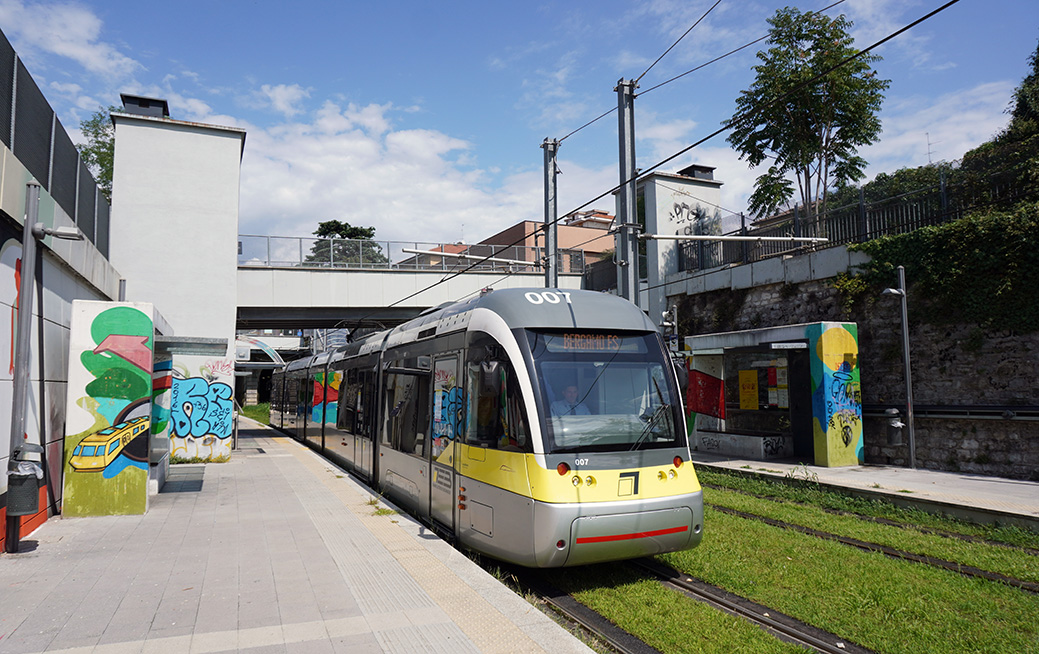 Bergamo's Borgo Palazzo stop is one of three that will be shared by T1 and future T2 services. It is built into a cutting that is barrier-free thanks to elevator and escalator access. Andrew Thompson

Tenders for design, construction and commissioning of the EUR176.5m T2 line of Italy’s Bergamo interurban tramway to Villa d’Almè were launched in late December.

The new 11.5km (7.15-mile) T2 will cross five municipalities en route to Villa d’Almè, sharing the central Bergamo terminus and the first two stops of the T1 line, Borgo Palazzo and San Fermo. From Bronzetti it will continue north-west along the route of the former Ferrovia della Valle Brembana (FVB), abandoned in 1966. New tunnels, overpasses and underpasses will be built along the predominantly segregated route, as well as 23 at-grade level crossings.

With 17 stops, T2 will be double-track throughout with the exception of the existing Ramera tunnel (near the future Ponteranica stop) and the historic bridge over the Rino river at Villa d’Almè. Built in 1906, this reinforced concrete structure has seen use as a cycle/pedestrian patch since the railway’s closure. The scheme provides for two further stops to be built in conjunction with urban redevelopment projects in Bergamo and Sorisole.

The overall EUR211.5m budget for line T2 – EUR151.5m provided by the Italian Ministry of Infrastructure and Transport, EUR40m by Lombardy Region, EUR9.by from the Municipality and Province of Bergamo and the balance from other municipalities along the route – includes the purchase of 11 low-floor 32m trams. Nine will be required for regular service, operating from a new depot near the future Petosino stop. Running at up to 70km/h (43.5mph), journey times from Bergamo to Villa d’Almè will be 30 minutes.

Line T1, opened in April 2009, is operated by a fleet of 14 Sirio low-floor trams, supplied by AnsaldoBreda. The expanded fleet will be used across both routes, with the main depot at Ranica remaining as the control centre for both lines.

The deadline for submitting offers is 16 February, with contract awards expected in May. Construction is planned to start in October, ahead of an opening in July 2026.

Dating back beyond the establishment of municipally-owned owner/operator Tramvie Elettriche Bergamasche (TEB) in 2000, there have been ambitions to introduce light rail service on part of the former FVB route. These were developed into a mature project in December 2018 with a technical-economic feasibility study conducted in collaboration with the Municipality of Bergamo and the University of Bergamo.

T1 was constructed between 2000 and 2009 and cost EUR150m. It connects Bergamo with Albino to the north-east also using a former rail alignment and covering 12.5km (7.7 miles) with 15 intermediate stops.

> A Systems Factfile on the Bergamo – Albino tramway appeared in TAUT 1009 (January 2022). Get your copy here.