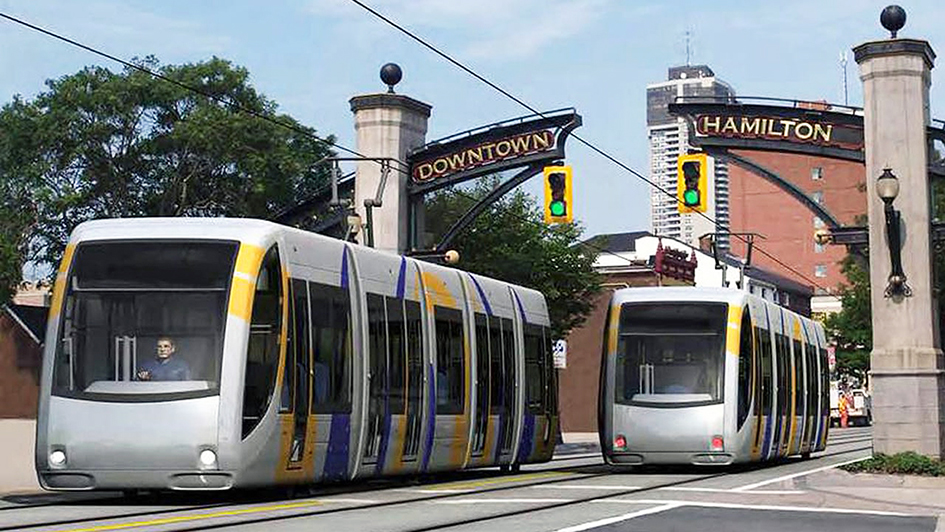 An artist’s impression of Hamilton’s proposed LRT; shelved in 2019, but revived in February as a ‘priority transit project’ for the Province of Ontario. Image courtesy of City of Hamilton

The permanent transit fund is designed to provide a stable platform for cities to build and expand their mobility networks, Mr Trudeau explained, adding that “while these investments are good for the economy and crucial to our recovery from this global crisis, they’re also helping us achieve our climate goals.”

Infrastructure Ministry spokesperson Chantalle Aubertin added that, unlike previous commitments, the money will not be divided between provinces but instead kept in a pot for access whenever a project is ready. It can also be used for a range of schemes, from subway and LRT extensions, electrification of bus fleets, pedestrianisation or cycleways.

Edmonton Mayor Don Iveson said the announcement satisfies a key demand that the country’s mayors have been pushing for for years: “Permanent transit funding offers cities long-term predictability to finally be able to deliver transformational system expansion and drive durable economic growth across our country.

“The recovery support here can be massive. It can be the centrepiece of the job-creating, emissions-reducing recovery that Canadians are looking for.”

Vancouver Mayor Kennedy Stewart similarly welcomed the initiative, saying that some of the funding will go towards the Broadway Subway project, a 5.7km (3.5-mile) western extension of the existing SkyTrain line from VCC-Clark Station to Arbutus that is being built under a PPP agreement signed in July 2020.

“We’re keeping our word and honouring our CAD1bn [EUR663m] capital commitment to transportation infrastructure investments in the city of Hamilton and we urge the federal government to join us in building a viable LRT,” said Caroline Mulroney, Ontario Minister of Transportation. “It’s going to take all levels of government to make a meaningful Hamilton LRT project a reality. Everyone is going to need to pitch in.”

The original proposal to build a 14km (8.7-mile) light rail line between McMaster University and Eastgate Square was cancelled by the province in December 2019 after cost estimates grew to more than CAD5.5bn (EUR3.65bn).

In April 2020 a task force confirmed the viability of better transit provision for the city of 537 000, with a subsequent technical analysis identifying BRT, BRT plus transit priority, and an LRT option for a truncated 3.2km (two-mile) route from McMaster University to Dundurn. The report concluded that all three were “technically feasible, but face challenges in their delivery and operation,” citing the city’s limited expertise in LRT operations as a key issue, but that the BRT options would not be delivered within the 2022 timeframe recommended by the task force.

“We have now rebounded from a cancelled project in December 2019 to a provincial priority project. However, for the LRT project to break ground, it would require federal participation. Based on that, we are cautiously optimistic.

“Hamilton’s LRT project is shovel-ready and ready to go ensuring economic benefits can be realised faster than any other possible project,” Hamilton Mayor Fred Eisenberger said in a statement on 9 February.