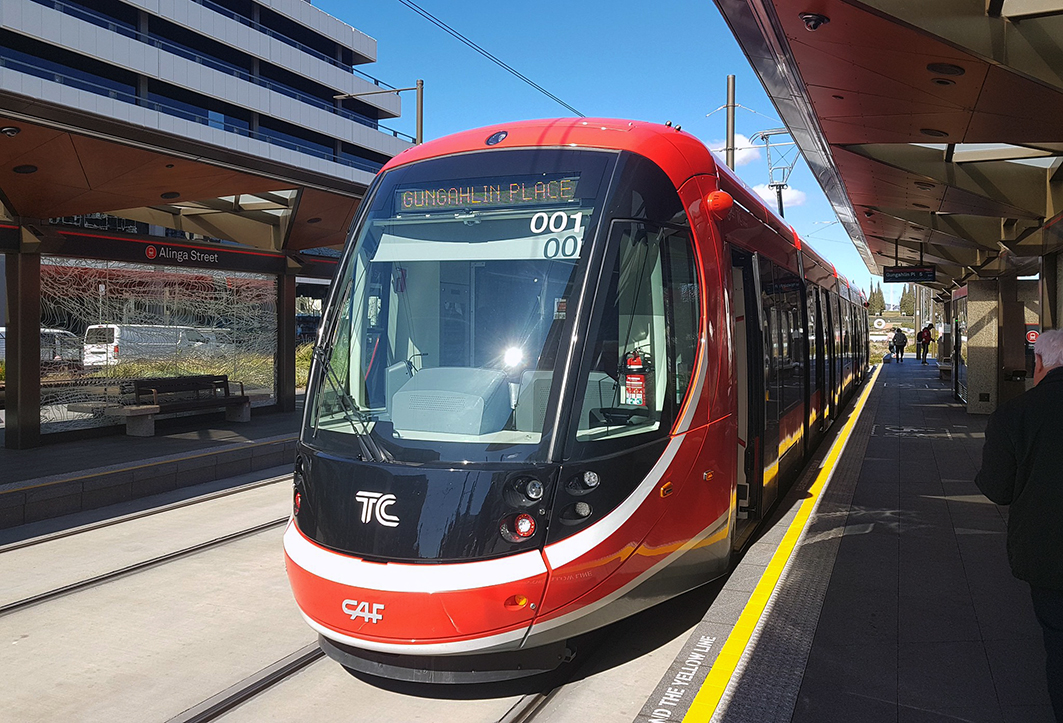 Canberra Metro Urbos 001 at Alinga Street in August 2020. It is from here that the Stage 2A extension will continue south to Commonwealth Park. L. D. O’Rourke / CC BY-ND 2.0

The Australian Capital Territory (ACT) Government has placed a AUD181.2m (EUR124.8m) order with CAF for a further five Urbos 100 low-floor trams for the tramway in Canberra, Australia. Deliveries of the new five-section cars is to start in 2024.

The contract includes retrofitting Canberra’s existing trams with battery energy storage to allow operation on the 1.7km (1.05-mile) Stage 2A to Commonwealth Park and the 9.3km (5.8-mile) Stage 2B continuation to Woden. The agreement includes expansion of the depot at Mitchell to accommodate the larger fleet by mid-2024.

Co-funded by the Federal Australian and ACT Governments, works to lift the London Circuit road to form an intersection with Commonwealth Avenue are to begin shortly. This project, a key supporting piece of infrastructure for the tramway extension, involves around 60 000 square metres of infill material.

Submission of an environmental assessment and works approval application for Stage 2A is to be submitted so track construction can begin as soon as the raising of the London Circuit is complete.

“Moving to retrofit all existing LRVs with onboard energy systems for wire-free running shows our commitment to delivering light rail, not only to Commonwealth Park, but right through the Parliamentary Triangle to Woden,” said ACT Minister for Transport & City Services Chris Steel.

“We need to order new LRVs now, and upgrade our existing fleet and depot, to ensure we have enough vehicles manufactured, delivered, tested and ready to start services to Commonwealth Park when construction of the track is completed.”

The 12km (7.5-mile) 13-stop first phase of the Canberra Metro light rail line from the northern terminus at Gungahlin Place to Alinga Street in the city centre opened 20 April 2019. CAF supplied 14 Urbos trams for the opening, with the first 33m car making its trial runs in June 2018. The manufacturer is also responsible for ongoing maintenance for a 20-year period under a separate agreement.

Stage 2B would take the tramway across Lake Burley Griffin and south to Woden. A commitment to funding this extension forms part of the ACT Labor and Green parties’ Parliamentary & Governing Agreement of the 10th Assembly.