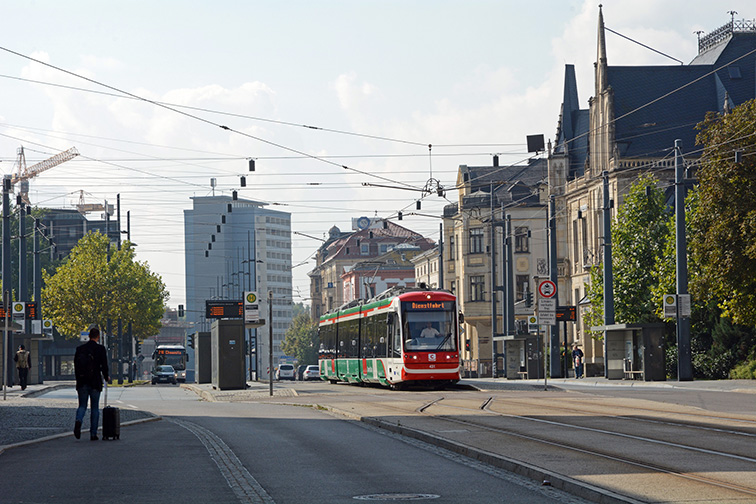 Delivery of Citylink tram-trains has allowed through-running between CVAG and DB metals. On 22 September 2016, 431 is in non-public use near Chemnitz Hbf. Services started in October. (Image credit: Tony Streeter)

By this summer, tram-train operations should reach the little Saxon market town of Hainichen, to add to those that already serve Burgstädt and Mittweida from the eastern German city of Chemnitz – but much more is to come.

Bringing line C15 alongside the existing C13 and C14 is part of a long-term project to better connect the German industrial centre and its tramway to its rural hinterland. This is a decades-long scheme, and it is also taking slightly longer than originally hoped – for maintaining a stable timetable using the electro-diesel Citylink vehicles that are key to the project on lines C13 and C14 has been prioritised over quicker expansion onto the third line. The tram-train vehicles are expected to take over C15 during a timetable change planned for June.

Precise timing details aside, Chemnitz is now ever more seeing the benefits of the concept of a tram-train network that was agreed in the 1990s. The pilot phase – known as stage zero – was opened in 2002. That physically connected the city’s tramway to the heavy rail network at Altchemnitz and, coupled with electrification, brought operation using Variobahn vehicles to the town of Stollberg south of the city.

Among various more recent milestones, October 2016 brought perhaps the most significant: the formal inauguration of ‘stage one’, with the through-running of Citylink vehicles from outlying areas onto the Chemnitzer Verkehrs-AG (CVAG) tramway at Chemnitz Hbf, and over the city’s network as far as Zentralhaltestelle (central stop).

The tram-trains had already been used since April over the heavy rail system as far as the Hbf – but not in regular passenger service over CVAG’s metals. Signing off for tramway operation under Germany’s BOStrab rules (Federal regulations that govern the operations of tramway and light rail systems) took place in August.

The order for the tram-trains had been placed in August 2012 by transport authority Verkehrsverbund Mittelsachsen (VMS) in a EUR42.3m deal for an initial eight Citylink LRVs. The 37m-long and 2.65m-wide vehicles have 94 seats; the first arrived in 2015. As well as 600V dc input from the overhead line, two environmentally-friendly diesel powerpacks rated at 390kW are mounted on the car’s roof to allow running on non-electrified sections. The LRV has a maximum speed of 100km/h (62mph). They will be familiar to readers as being from the same family as those delivered to Sheffield (UK) for its tram-train pilot, as well as seeing service in Alicante and Valencia (Spain).

That initial Citylink order was followed in 2015 by confirmation that a further four would be delivered, intended to facilitate delivery of the next phase of a scheme officially dubbed the ‘Chemnitzer Modell’. Stage two sees southern expansion of the concept to Thalheim (see below).

Delivery of the hybrid tram-trains followed major rebuilding at Hbf to replace the station’s former bay platforms 1-4 with through platforms, and to open the southern rear wall to connect with the tramway. Those platforms had been utilised since 2013 (TAUT 907, July 2013) by tramlines 2 and 6, and the initial tram-trains of line 522 to Stollberg (now renumbered C11).

Running Citylink vehicles over lines C13, C14 and C15 is a long way from being the end of VMS ambitions for better connecting the local rail-based networks. In total a network of around 226km (140 miles) is named as the ‘target’ for 2020, and the complete project is priced at around EUR300m. The majority of the funding so far has been from federal government sources, with further support from the state of Saxony, and from within VMS itself. Assistance has also come from the European Regional Development Fund.

That money has been attracted by the prospect of improving travel opportunities for residents in the area around a city that between 1953 and 1990 was known as Karl-Marx-Stadt, and which has had a tramway since 1880. There would have been little prospect of uniting the railway and tramway networks back then though, even if technology had allowed it; although now standard-gauge, the city’s tram system was initially laid to 914mm (3ft) gauge, a legacy of its then British connections – and the last of the narrow-gauge lines did not disappear until the 1980s.

Modernisation in this former East German city since Germany’s unification has not been limited to introduction of the ‘Chemnitz Model’: changes on the tramway have included rebuilding of the major Zentralhaltestelle stop, and introduction of Variobahn trams in 1994. Tatra T3D vehicles have also been upgraded, while June 2016 saw an order placed with Škoda for 14 low-floor, bi-directional ForCity trams, for fleet renewal and expansion of services. 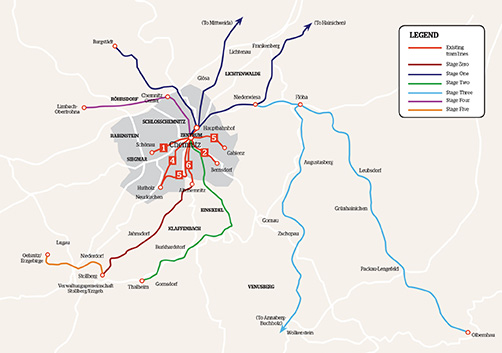 What comes next? Last year saw the start of physical work on stage two – which is to provide a third connection between the tramway and railway, this time at Chemnitz Süd in the south of the city. That project is also broken down into sections, and January 2017 saw the starting gun fired for work between Dittestraße and Campusplatz/the new auditorium building of the Chemnitz technical university on the Reichenhainer Straße. Initial activity is to include tree felling and utilities relocation, before work starts (planned for March) on the creation of a 6.5m-wide median strip. Trees are to be planted to replace those removed.

It is expected that major works on stage two will be finished by December, with completion of the project in 2018. The scheme includes doubling of the railway between Chemnitz Süd and Chemnitz-Reichenhain to increase capacity as well as 2.2km (1.4 miles) of new double-track tramline, and 400m of connecting railway.

The aim is to provide a 30-minute tram-train service between Chemnitz and Thalheim through the heavily populated valley known as the Zwönitztal, as well as a ten-minute tram service between Chemnitz Hbf and a new turning loop at Campus Süd near Chemnitz Süd station. It is at Chemnitz Süd that the heavy rail lines to Glauchau and Aue diverge, and where the tramway passes under the railway on Bernsdorferstraße.

Also planned is the separate stage three, which would see further additional capacity created with the building of a new route out of the city, initially as two-line tramway from the centre to Chemnitz-Hilbersdorf, a part of town situated in the north-east. From here, the line would parallel existing Deutsche Bahn heavy rail tracks eastwards to Niederwiesa, where it would physically connect to the railway network. Tram-train destinations made possible by such a scheme would include Olbernhau, to the south-east on the Czech border, and Annaberg-Buchholz, roughly 40km (25 miles) to the south.

The most complex of all the individual sections of the project is expected to be stage four, which involves crossing two motorways and another major road. The plan is for around 6km (3.7 miles) of new double-track tramway to run northwest from the city to Saxony’s largest shopping centre, the out of town Chemnitz Center, situated adjacent to the major east-west A4 motorway. From the Chemnitz Center the line would be designated as railway and become single track. It would run over a mixture of new and upgraded formation some 10km (6.2 miles) to Limbach-Oberfrohna, west and slightly north of the city.

If realised, the line to Limbach-Oberfrohna could become part of an axis running from Oelsnitz and through the city centre. That’s because the final stage – five – is to connect Stollberg where stage zero services currently terminate via a new-build line to the existing railway to Oelsnitz.

Despite its classification as the fifth stage, progress should be much more immediately apparent on this section than on stages three and four: with planning work undertaken this year, it’s intended that physical construction will take place in 2018-19.

This part of the project involves the creation of 3.5km (2.2 miles) of new single-track railway along with a passing loop, as well as associated work that includes taking the line under the A72 motorway. There are to be four new stops (in Stollberg at Grüner Winkel, Gewerbegebiet, Kaufland and Wohngebiet; and at Mitteloelsnitz at Wohngebiet); also the option of a spur to serve the Gewerbegebiet (industrial area).

From Stollberg, the new line is initially to follow the B169/B180 roads, joining the existing network at  Niederwürschnitz after passing under the A72. The project includes electrification as far as Oelsnitz.

In one sense, completion of stage five will bring the Chemnitz model back to its origins: the initial stage zero project that opened in 2002 saw the creation of a 23km (14-mile) tram-train route between Hbf and Stollberg by building a connection between the tramway and railway at Altchemnitz, plus electrification of the railway. Modernised crossings and new signalling were part of the scheme, as were four new stops at Riemenschneiderstraße and Klaffenbach in Chemnitz, plus Schlachthofstraße in Stollberg, as well as Friedrichstraße (also in Chemnitz) later on.

Operated by City-Bahn Chemnitz, this initial tram-train line is still demonstrating its worth: it uses Variobahn vehicles, running on 600V dc on the CVAG infrastructure, and 750V dc while on the railway network of DB.