Coming of the Tempe Streetcar 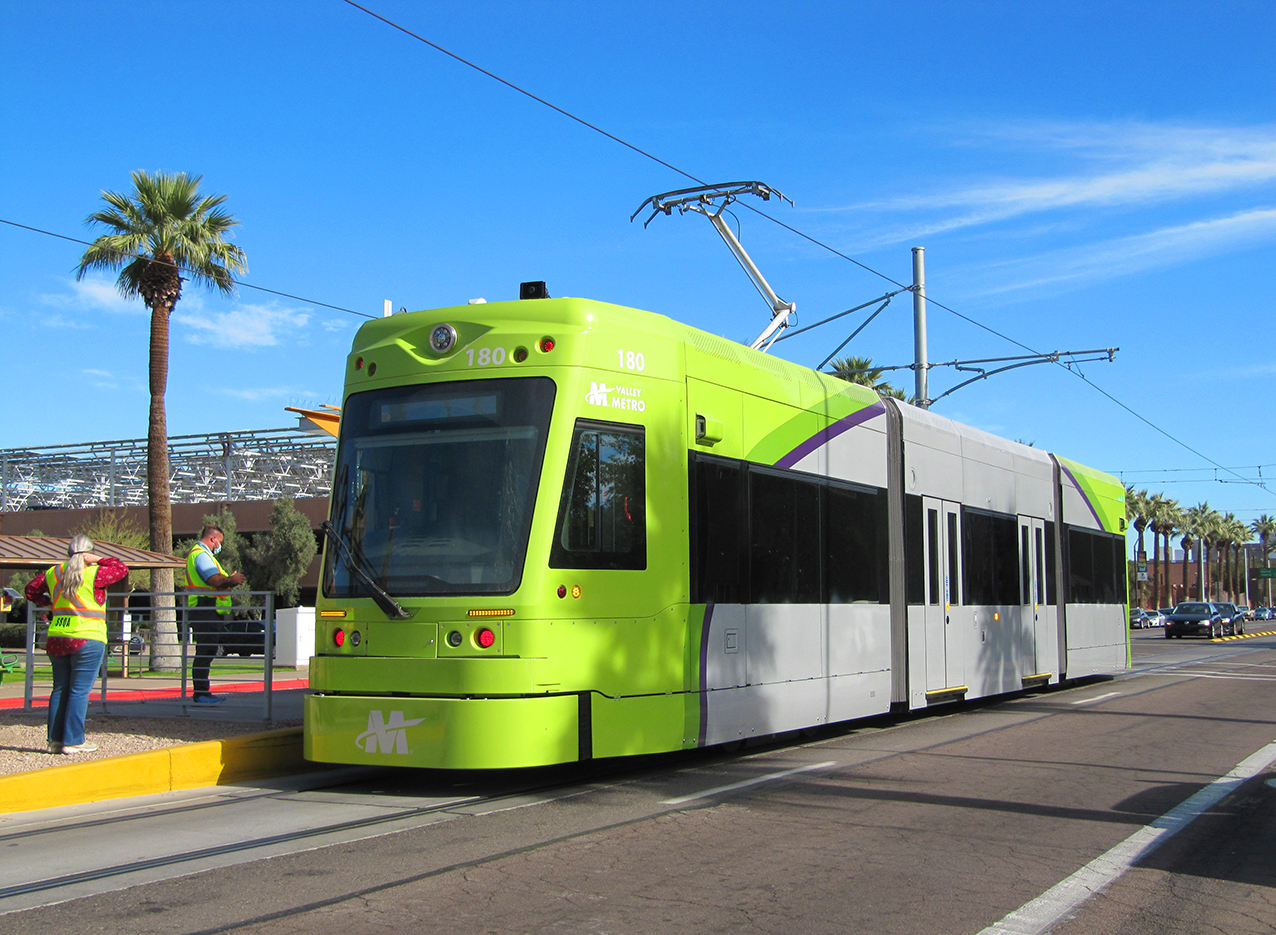 Rural Road stop is on the twin-track section at the southern end of the new streetcar route in Tempe, AZ. V. Simons

Vic Simons explores the exciting and innovative light rail developments in Phoenix and its neighbouring communities.

When TAUT first visited Phoenix in December 2008, it was to report on the opening of Arizona’s first modern LRT line – 32km (20 miles) running through the central core and into the neighbouring cities of Tempe and Mesa. Jump forward 13 years and extensions have been completed at both ends of this first line, taking the system to 42.3km (26.3 miles).

The most recent expansion is the 3km (1.9-mile) eastern route to Gilbert Road in Mesa. Opening in May 2019, this USD186m (predominantly federally-funded) extension is notable as, unusually for North America, the alignment takes light rail straight across a roundabout. The project also includes significant urban realm improvements.

Three further extensions are being built, with a fourth in the advanced planning stage. The southern expansion is in reality two projects. The first section will head southwards on an 8.8km (5.5-mile) route from the existing downtown LRT station to Baseline Road. Adding eight new stops and two park-and-ride sites, this is due to open in 2024. The second project is a western spur running outwards via Jefferson and inwards via Washington for a total of 2.3km (1.4 miles). Preliminary engineering is underway to develop early construction plans and technical specifications for this project, known as the Capitol Extension. 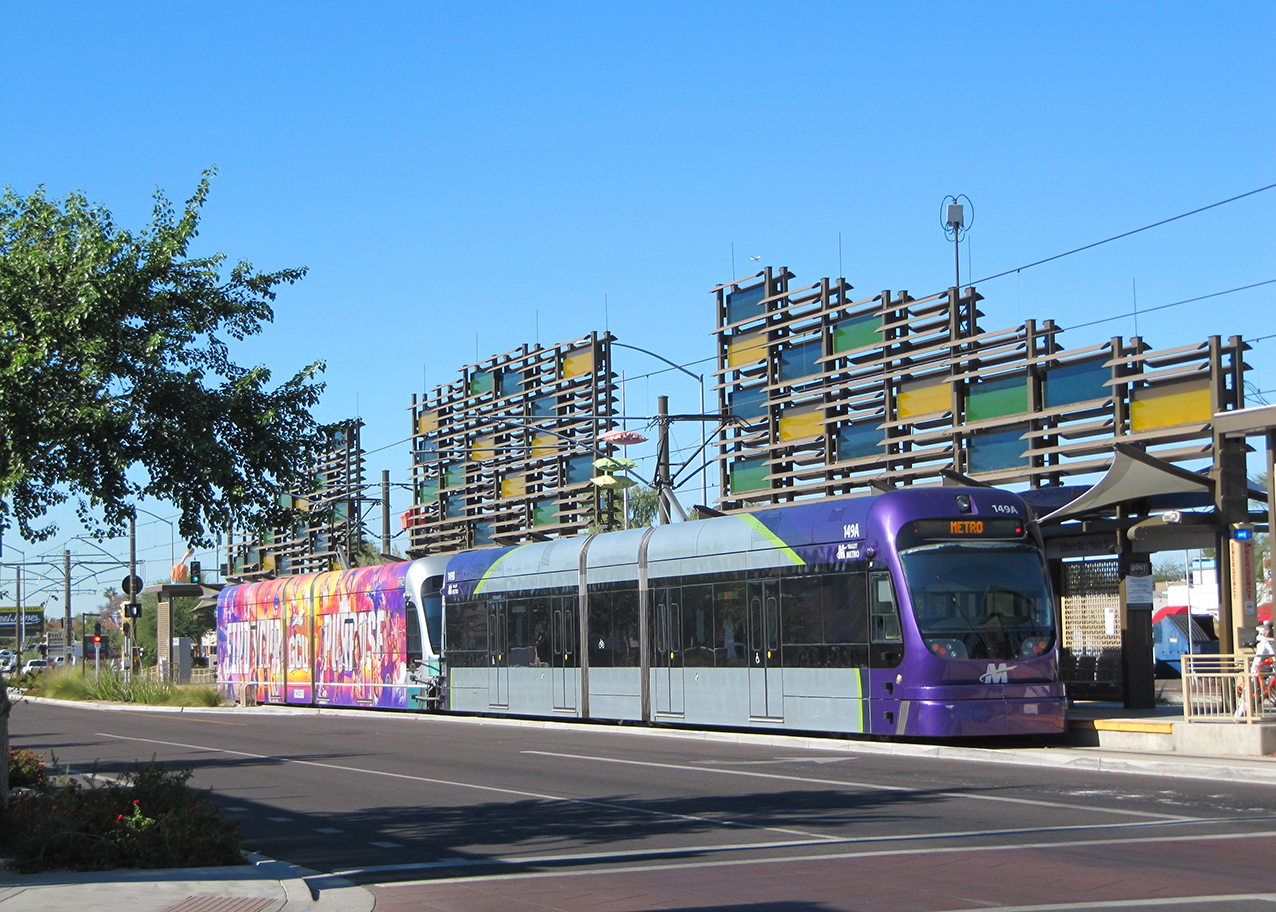 The new LRT terminus at Gilbert Road. Three-section Kinkisharyo car 149 is in the lead, dressed in the latest Valley Metro livery. V. Simons

The 2.6km (1.6-mile) Northwest Extension Phase II will take light rail west from the present Dunlap Avenue terminus across the I-17 highway, using the system’s first transit-only bridge, to the redevelopment area on the site of the former Metrocenter Mall. Including three new stops and a new park-and-ride, work began on this USD401m project in late 2020 and is also scheduled for completion by the end of 2024.

There is a long-term planning goal to take the network a further 15km (9.4 miles) west along the median of I-10 to the Desert Sky Transit Center. This  is expected to be approved by the Valley Metro board in 2022.

All of these projects are being delivered under the Transportation 2050 Plan which foresees growth of the network to around 100km (over 60 miles), placing 90% of the city’s population within ten minutes of a public transport route.

The coming of the streetcar

The next imminent opening is the Tempe Streetcar. With 195 800 residents, this vibrant city (whose residents have an average age of 28) has a high-population density and is a de facto suburb of Phoenix. It is already served by an LRT connection between the downtown and Arizona State University. 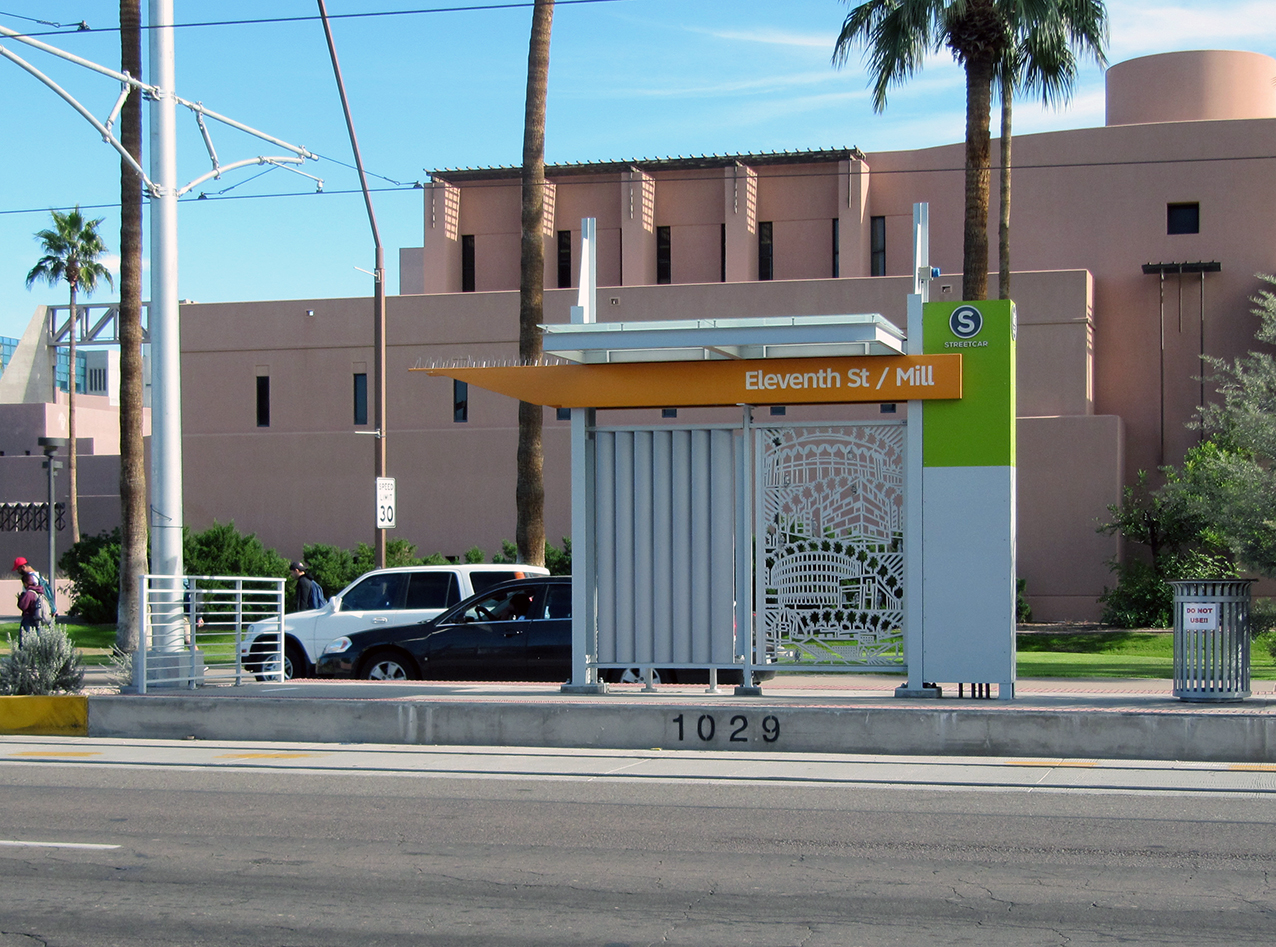 An example of the simple streetcar waiting structures at Eleventh Street. V. Simons

Valley Metro and the City of Tempe selected a streetcar project as the locally-preferred alternative to serve the growing city’s downtown area in September 2010.

Receiving approval from the Federal Transit Administration in 2015, work really began in 2017 with the receipt of USD75m in federal funding towards the scheme. This was bolstered by a further USD17.4m in June 2021 under the American Rescue Plan. Other contributions are from a Maricopa County sales tax and the City of Tempe.

In 2016 Valley Metro and the City of Tempe began designing the 14-stop system, with Stantec Consulting Services engaged for design work in December that year. The same company has light rail experience in Phoenix, consulting on the Valley Metro LRT system. Stacy & Witbeck (another firm with local LRT experience) is acting as prime contractor on the USD192m project. The estimated USD3m in annual operational and maintenance costs are to be met by the City of Tempe, with Valley Metro responsible for day-to-day operations.

As with many US streetcar installations, this is seen as a key driver of economic growth and redevelopment of under-utilised sites in the city’s downtown area, as well as serving the emerging employment corridor of Rio Salado Parkway. Older low-density developments expected to be redeveloped account for around 55ha. of land within 1km (0.6 miles) of the streetcar corridor.

This exciting project encompasses the use of hybrid OLE/battery vehicles. A request for proposals for the supply of low-floor cars with off-wire capability attracted six responses, and in June 2017 a USD33m contract was awarded to Brookville Equipment Corp. of Pennsylvania. Following delays related to the coronavirus pandemic, the first deliveries began in 2021 with test running from June that year. The remaining three-section cars are due in the first quarter of 2022, enabling a spring inauguration. 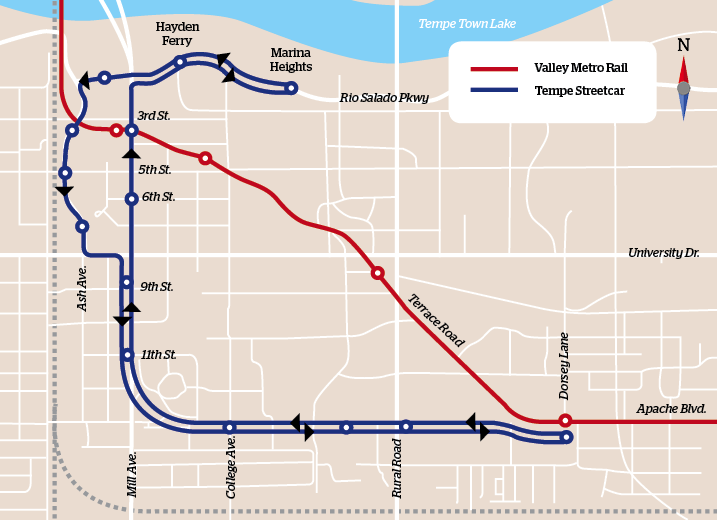 A map of the Tempe Streetcar, due to open to passengers on 20 May. TAUT

The double-ended streetcars are an evolution of the Liberty design already in operation in Dallas, Milwaukee and Oklahoma City. They are 20.3m in length and can carry up to 32 seated passengers with over 90 standing if crush loaded. They feature a 70% low-floor centre section with two doors on each side, making them ADA compliant and to allow for level boarding.

The 4.8km (3.3-mile) line runs from the Rio Salado Parkway in Marina Heights via downtown to Dorsey Lane. There are two interchanges with Valley Metro’s light rail system, at 3rd Street and again at the eastern Dorsey Lane terminus where there is a cross-platform connection.

Although technically interoperable – both systems use standard-gauge track and 750V dc overhead – streetcars will not use light rail metals in passenger service, but will run over a connection near Dorsey Lane to access the existing Valley Metro Rail operations and maintenance centre at South 48th Street near Phoenix Sky Harbor Airport.

Built for the LRT system’s opening in 2007, this facility was originally designed for 50 LRVs. Nearing completion under a discrete USD94.9m project, it will soon have the capability to serve 90 LRVs and streetcars.

The alignment has 14 stops, some of which are single platform in the one-way downtown loop. The central northbound route along Mill Avenue has no overhead infrastructure, requiring operation under power from the Liberty NXT cars’ onboard energy storage, as does part of the alignment on Rio Salado where there is also a short single-track section.

Free to ride from 20 May

Operations are entirely funded by the city of Tempe, with passenger service due to open on 20 May. The new line will be free to ride for the first year.

The effects of light rail development in Phoenix and its neighbouring cities have been impressive. Although ridership has fallen dramatically as a result of the COVID-19 pandemic (to 6.6m in 2021), in 2019 a total of 15m journeys were recorded.

Perhaps more significantly, at the end of 2020 the economic effects along the LRT and streetcar corridors were noted as attracting USD14.4bn in public and private development to the city.