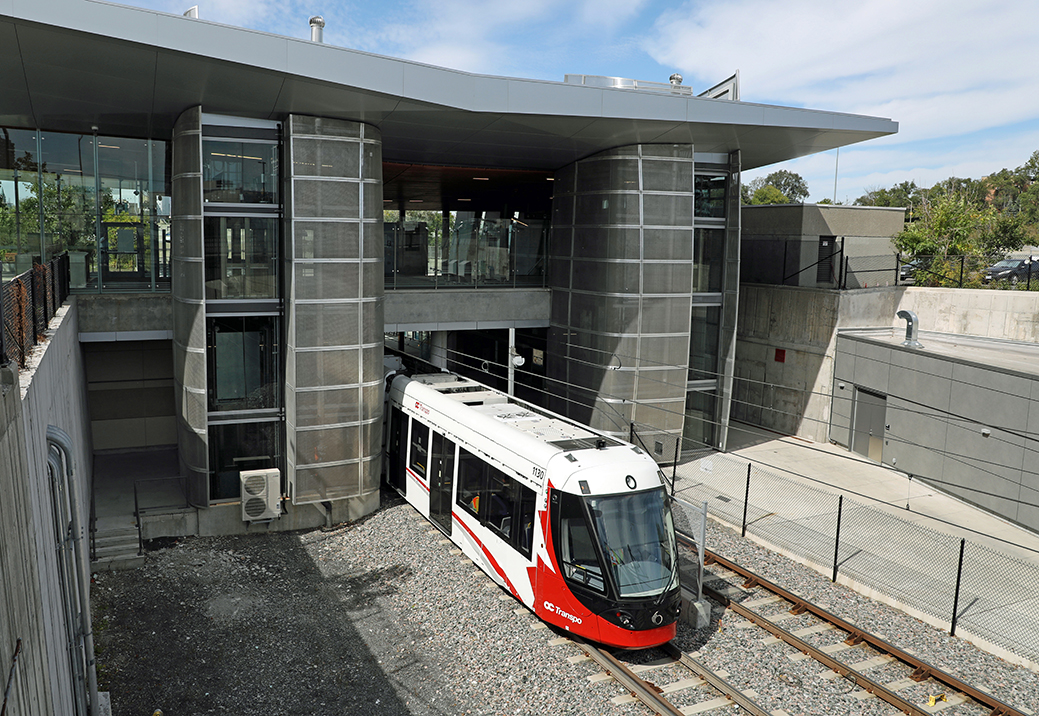 Image courtesy of A. Grahl.

Public hearings are underway in the Province of Ontario’s inquiry into the delayed delivery and technical issues associated with the first stage of Ottawa’s ‘Confederation line’ LRT project. The probe follows breakdowns and repeated closures of the 12.5km (7.8-mile) east-west light rail line between Tunney’s Pasture and Blair Station, which runs (partly in subway) over former a bus formation. Originally projected to open in May 2018, the first passengers were carried in September 2019.

The mandate of the commission carrying out the inquiry covers the city’s procurement strategy and contract awards; the performance of winning bidder Rideau Transit Group and its management of subcontractors; and the city’s oversight throughout the process.

Thanks to the initial 1970s planning, Ottawa’s Transitways were built with future light rail conversion in mind. Marking a move towards European-style low-floor LRT, O-Train line 1 (as it is now known) has 13 stops, of which four are in a 2.5km (1.55-mile) subway under the city centre.

A fleet of 34 low-floor Alstom Citadis Spirit LRVs, based upon the Citadis Dualis manufactured and operated in France, was ordered in 2013. Each 48m double-ended vehicle has 120 seats, provision for wheelchairs and space for around 180 standees. Boarding is through seven doors on each side and operations are handled in coupled pairs.

A 15km (9.3-mile) western extension will replace another section of Transitway, adding nine stops between Tunney’s Pasture and Moodie. At Lincoln Fields, three stops before the new western terminus, a short southern branch using the existing Transitway corridor will continue to Algonquin with one intermediate stop. This line is planned to open in 2025.

At the eastern end, an extension from Blair to the extremity of the Transitway at Trim Road is also underway. Adding five stations, this 12km (7.5-mile) extension is planned for completion in 2024. Space constraints around stops on phase one mean that none have park-and-ride facilities, although these are planned for stations on the new extensions which serve more suburban areas.