Monday 4 April was momentous for the Very Light Rail team at Coventry City Council. This was the day that the West Midlands’ ‘ask’ of GBP1.05bn (EUR1.25bn) for a package of rail, tram, bus and active travel improvements for the coming five years received formal approval under the UK Government’s City Region Sustainable Transport Settlement (CRSTS).

Within the detail, however, was something of potentially wider significance – an allocation of GBP54m (EUR64.5m – subject to business case approvals) to progress a Very Light Rail demonstrator line for Coventry.

Launched six years ago as a low-cost urban LRT concept, the Coventry Very Light Rail (CVLR) project has gathered momentum in the past couple of years as the UK city sought to offer “something that complements bus-based solutions” for its current population of 380 000. The fastest-growing city in the country, Coventry’s population is forecast to rise to around 435 000 in the next decade.

“We saw an opportunity to use our rich manufacturing skills and work with our innovative partners in Coventry and the wider region to create a cleaner, greener form of public transport, one that takes advantage of Coventry’s place at the heart of the UK’s automotive sector and builds on our ambition to lead the green industrial revolution,” says councillor Jim O’Boyle, cabinet member for jobs, regeneration and climate change at Coventry City Council.

The ‘Urban VLR’ concept began with a clean sheet to create battery-powered vehicles and an innovative shallow trackform to reduce the costs of new urban rail schemes by around two-thirds compared to conventional tramway installations. In a world where demands on the public purse are acute, but cities still need to take action on air quality, it is easy to see why the target cost of GBP10m/km (EUR11.6m/km) for a VLR solution has generated so much interest.

“We’re looking at the second half of 2024 for final testing and commissioning of our demonstrator route”, Nicola Small, Very Light Rail Programme Manager at Coventry City Council told TAUT. “But we are always looking to challenge that timeline to see if it can be brought forward.” 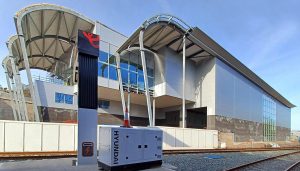 To allow integrated systems testing, the Very Light Rail National Innovation Centre also has a Furrer+Frey rapid charger which was installed in 2021. BCIMO

Researchers from Warwick Manufacturing Group (WMG) at the University of Warwick, in partnership with Transport Design International, were given the brief of creating an 11m twin-bogie car with a weight of no more than one tonne per linear metre and dynamic axle loads of no more than 5t. They have achieved this by pairing a steel chassis with extensive use of aluminium and recycled composites.

Modular design minimises the number of panel types, and onboard energy storage – coupled with a new rapid charging system developed by Furrer+Frey UK – removes the need for overhead electrification. The use of polycarbonate glazing and removal of sanding equipment have all aided in this dramatic diet, with the latter taken care of via advanced anti-slip/traction control sourced from the automotive sector.

With capacity for 56 passengers, 20 seated, the prototype includes a driver’s cab although future plans include a capability for autonomous running. Where demand dictates, the vehicles will have the ability for ‘platooning’ via a virtual coupling and the infrastructure in Coventry is being designed to handle two-vehicle lengths.

Autonomous operation is key to the business case for lower-cost operations. This project has faced a few setbacks due to requirements attached to funding bids, but will dovetail with a region-wide partnership to demonstrate the potential of high-speed cellular networks (WM5G).

The development of local supply chains is another significant area. The initial vehicle build was undertaken by NP Aerospace in Coventry under TDI’s guidance. Final assembly and initial testing took place at TDI’s facility at the Long Marston Rail Innovation Centre; 44% of the total vehicle spend is within the Midlands, with over 70% in the UK. The council’s ambition is to achieve 100% UK spend following the prototype.

Delivered to the VLR National Innovation Centre in Dudley in May, site acceptance and proving trials are underway using this facility’s 2.2km (1.4-mile) test track.

“We’ve made solid progress in terms of the vehicle development,” Ms Small explains. “There are still a few challenges, but those were perhaps to be expected with a ‘first of a kind’ concept.

“It will be in Dudley for 18 months undergoing performance and all-weather durability testing and then we will be looking to product development. Here we will be engaging closely with passenger groups to look at how we can improve the vehicle and take it from concept state to a product that we can take forward to low-volume production and operations.” 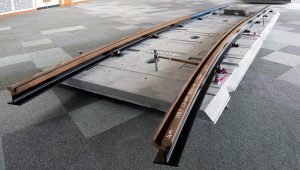 The prototype CVLR shallow trackform: note the manhole cover for easy access to utilities if required. The infill between the rails can be traditional asphalt, paving or green track.
Coventry City Council

Even greater strides have been made with the low-cost trackform. Another WMG-led project, beginning in November 2018, researchers have since worked with French engineering partner Ingerop and its UK-based subsidiary Rendel to develop a fibre-reinforced 100mm-thick slab. Ready-formed in lengths of around three metres, this eliminates the base layer (and two-thirds of the depth of a traditional trackform) and the standardised units are easily cut to size either off-site or in situ. With a mechanical fastening for flexible location and alignment of the rails, these are welded in place on site.

The guiding principle is that the system can be easily removed if necessary to allow access to utilities; National Joint Utilities Group guidelines say all apparatus should be at least 450mm below the surface, with critical equipment such as gas mains and sewers at least 600mm.

The first slabs have been manufactured with a partner in the UK and are being installed at the University of Warwick as part of a full ‘dummy road’. Sensors will collect data on movement, and utilities providers will be invited to look at the interface (or lack thereof) with under-street apparatus. Again, the local supply chain is being directly engaged to ‘skill up’ a workforce ready for the future demonstration line in Coventry.

Both straight and curved sections of slab and rail will also be installed at Coventry City Council’s Whitley depot to evaluate performance under the high axle loads of HGV movements. This ‘live’ highway test will offer an accelerated real-world loading scenario and will also feature a track fitted with sensors to monitor axle load data, structural integrity and vibration.

Ms Small continues: “All the lab tests show that it is an ultra-high performing slab. Following those two phases we will install the new slab track in the loop in Dudley for integrated system testing. The loop is laid to a 15m curve and here we can benchmark the new slab design against existing embedded and sleeper track systems.”

“The great news is that we already have the funding in place for all three of those stages.” 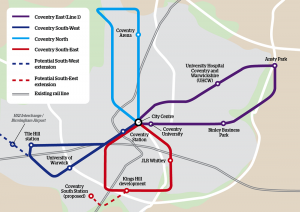 The initial demonstration route (planned to open in 2024) will form part of the planned ‘line 1’, crossing the city centre between the railway station and Pool Meadow Bus Station. Courtesy of TAUT

Current plans will see a 1.6km (one-mile) double-track route run between the city’s recently-revamped railway station and Pool Meadow Bus Station, included in the GBP54m of CRSTS funding. “We’re hoping to complete the design and planning to prepare us for a TWAO submission in 2023. Delivering 1.6km of the 6.73km [4.2 miles] we originally outlined as the first route leaves us with no abortive costs,” Ms Small continues. “The indication is that we can meet the timescales set out in our programme, but clearly there isn’t much headroom.”

The full ‘line 1’ would connect the railway station via the city centre to the University Hospital Coventry and Warwickshire. Depending on the results of the demonstrator phase, this could be in operation by 2026-27. Studies have shown the potential to continue for around 3km (1.9 miles) to a new park-and-ride near Junction 2 of the M6 motorway to the north-east of the city and the large technology centre at Ansty Park.

Although this first route would initially operate as a shuttle, plans for a wider ‘clover leaf’ network are a ‘high-level aspiration’, Ms Small says.

In terms of future operations, Coventry City Council has a service contract with Transport for West Midlands (TfWM) allowing it to tap into advice from the light rail team at Midland Metro Limited. “They have been really helpful as we need that operator input from an early stage,” Ms Small continues. “Their keenness also shows how TfWM is looking at the potential of CVLR for the wider West Midlands network.”

Beyond the West Midlands…

What makes the ‘Urban VLR’ concept more exciting is the diverse range of spin-off technologies which are being created from the various R&D programmes. New powertrains, cutting-edge materials, innovative construction techniques, autonomous operation, the list goes on.

“There is so much here that can benefit the sector,” Ms Small adds. “As we work towards our objective of delivering an integrated transport system, we are giving rise to other innovations and companies are willing to invest at their own expense in helping us find solutions.

“With the city’s ground-breaking new Multi-Use Recycle Facility due to open soon we have the opportunity to explore greater use of recycled materials in the future to make CVLR even more sustainable and even more attractive.”

“We obviously need to be a little careful in not getting too deeply involved with endless R&D projects, but we are always looking for how we can deliver more from this project. It would be great if we can get sustained funding to take some of these potentials forward.”

Significantly, Coventry City Council will hold the intellectual property rights to both the trackform and vehicle design, and this could help to return some of its investment to be put back into growing the system.

But in Ms Small’s eyes this is about much more than ‘just’ delivering a future-proofed transport system. “It’s all too easy to get caught up in measuring a pound invested equals x pounds return,” she concludes. “That misses the point of what we’re trying to achieve. VLR can help smaller towns and cities who can’t justify a full light rail system to achieve their ‘levelling up’, air quality and decarbonisation agendas. You can’t easily put a price on these things.”

> This is an abridged version of an article which first appeared in TAUT 1016 (August 2022). Buy your copy here.