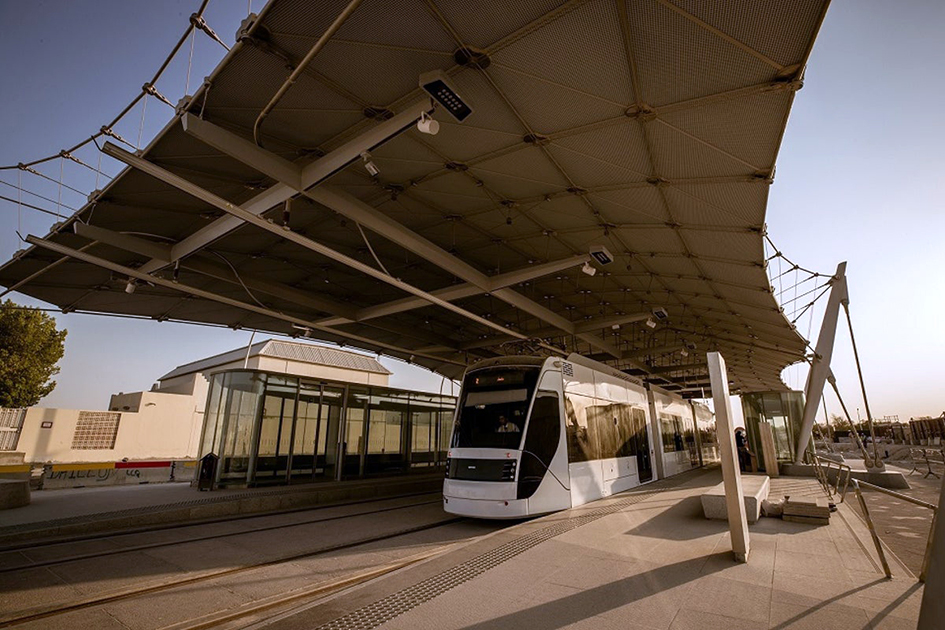 The first section of the Education City Tram in Doha, Qatar, opened to passengers on 24 December. The Blue line features seven stops, serving sites across the 12km2 (4.6 square mile) education and research complex development built by the non-profit Qatar Foundation to the east of the capital. Facilities served include the Education City Stadium, Qatar Academy and VCUarts Qatar.

A fleet of 19 three-section 100% low-floor Avenio trams have been delivered by Siemens under a USD412m turnkey contract (with Middle Eastern construction partner Habtoor Leighton Group) awarded in 2012. This also saw the supply of electrification, signalling and communications systems and an operations control centre and a depot.

Four of the 27.7m-long, 2.55m-wide trams – capacity for 234 passengers, 60 seated – are used for the initial service. They have been adapted for the local climate with insulated and tinted windows, uprated air-conditioning throughout and sunshades to protect the roof-mounted electrical equipment. The vehicles also feature Siemens’ Sitras hybrid energy storage system of supercapacitors and batteries, with recharging taking place via roof-mounted conductor rails at tramstops and in tunnels. Platform screen doors are installed at four stops.

Travel is free, with trams running 06.30-17.00 on weekdays and to a four-minute headway at peak times.

The line also offers interchange with the automated metro Green line that opened on 10 December. This 22km (14-mile) route between Al Riffa and Al Mansoura, known as the Education line, includes 11 stations on a mostly underground route; 5.4km (3.4miles) at the western end is on an elevated alignment. It is open to passengers 06.00-23.00 Saturday-Thursday and 14.00-23.00 on Fridays.

Two extensions of the north-south Red line opened on the same day, taking the system’s longest line to 40km (25 miles) with 23.4km (14.5 miles) underground. These include a one-station spur from Oqba Ibn Nafie to Hamad International Airport Terminal 1, and a northern extension with three stations to Lusail; this route features a station at Legtaifiya that is yet to open but will provide interchange with the Lusail tram network when this opens later this year (see page 52 for more on 2020’s tramway openings).

The Red and Green lines have connecting stations at Al Bidda and Msheireb, the latter also providing interchange with the 14km (nine-mile) east-west Gold line which opened in November 2019. The latest openings all but complete the metro’s first phase.