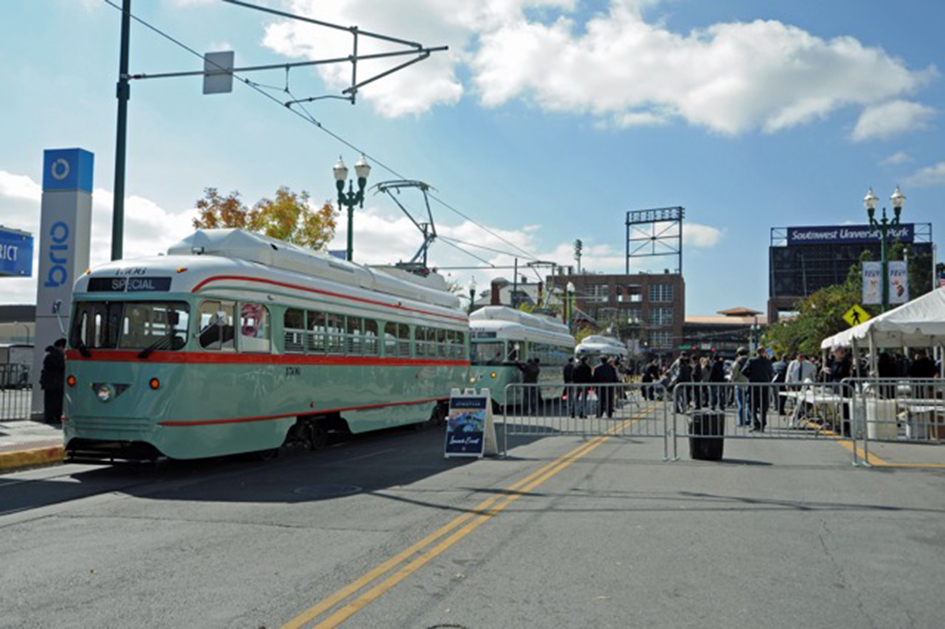 Friday 9 November 2018 was a significant day for the Texan city of El Paso, marking the return of streetcar service to city streets after a 44-year absence. Yet far from being ‘just another US urban circulator’, this service had the unusual distinction of re-introducing six of the same PCC cars – albeit substantially refurbished – that ran in the city at the time of the 1974 closure.

Another unusual feature is that this project has required no federal finance. The majority of similar systems that have opened in recent years – Washington DC, Atlanta, Tucson, Kansas City, Salt Lake City – have all utilised significant Federal Transit Administration (FTA) grant and loan funding. Yet in El Paso,
the USD97m in investment was provided by the State of Texas, although it was made very clear early on that this was a ceiling and not a target. Any overruns would need to be funded by the city, which was understandably reluctant to do so and declared that not a penny more would be spent on the scheme.

As detailed in TAUT 956, the El Paso streetcar was unique in that for many years it was a cross-border system. With the main city lines having closed in the 1950s, the remainder was the route into the neighbouring city of Cuidad Juárez; this lasted until the Mexican authorities ripped up the tracks on their side of the border following pressure from local businesses who felt that the public preferred to shop in the US rather than locally, thus damaging local trade.

As a result, the short section on the US side was rendered unviable and closed shortly afterwards. Nine of the PCCs were stored in the open on a site near El Paso International Airport and the saving of these vehicles was largely due to the efforts of the Paso del Norte Streetcar Preservation Society. The hot,
semi-arid West Texas climate minimised the cars’ deterioration, so when the decision was taken to reopen the system these were solid enough to make refurbishment and modernisation a practical option. In fact, it was an important condition that the iconic PCC vehicles were retained.

On TAUT’s last visit in May 2017, some track had been installed but there was little evidence of major construction. When returning in November 2018 the transformation was complete. Since the original closure in May 1974, the city has developed substantially and the population of the region has more than doubled (359 291 in the 1974 census, 833 592 in 2016) so the issues of urban congestion demanded a new solution to encourage people out of their cars.

The city’s main growth has been to the north and west, with the small suburban town of Chaparral now effectively forming part of the El Paso conurbation despite lying across the state border in New Mexico.

Even before the first streetcars ran, the impacts on the city were already being felt. The downtown area was being redefined and new investment in hotels, restaurants and residential blocks was planned, with land along the route attracting higher premiums.

The mainstay of public transport until the opening of the streetcar had been the motor bus, but it was clear by the turn of the 21st Century that urban traffic levels were greatly restricting future development. In June 2012 the route was announced for the streetcar revival; it was part of a bold masterplan based around connectivity, regeneration, tourism and improved air quality that would introduce a new integrated transport network to make El Paso the least car-dependent city in the south-western United States.

Works began in 2016, managed on behalf of the City and public transport undertaking Sun Metro by the Camino Real Regional Mobility Authority. Atkins provided the project management, charged with delivering the project within the strict budget and to time; this succeeded on both counts and
pre-revenue testing began in October 2018.

The 9 November grand opening was attended by city and state officials with the ceremony itself conducted by Mayor Dee Margo, followed by an inaugural trip around the downtown loop (see TAUT 973). Free rides were offered during the opening weekend and the system remained free at weekends until 6 January. Standard city transit fares are charged at other times (USD1.50 for a one-way
ride, USD3.50 for a day pass and with discounts for under-18s, over-65s, students and those with disabilities). Cash fares are paid through the onboard farebox as part of the exact fare system; the driver does not give change. Streetcars operate seven days a week: Monday-Thursday 07.00-19.00 with extensions on Friday and Saturday evenings. Sunday and holiday services run 09.00-17.00. Sun Metro is funded primarily through federal funds, sales taxes and rider fares.

The system is laid as a 7.7km (4.8-mile) figure-of-eight with two one-way loops. There are 27 stops on the Uptown Loop, sharing ten with the Downtown Loop. The latter takes in downtown El Paso, starting at the Downtown Transit Center and heading north on Santa Fe to Franklin Street where it turns east to South Kansas Street. Before reaching South Kansas, this diverges north on Stanton as the southern route continues back to Father Rahm Avenue where it turns west back to Santa Fe and the Downtown Transit Center.

The Uptown Loop continues along North Stanton Street to Baltimore Drive where it heads west to North Oregon Street, from where it heads south again. A few metres from this junction is the Glory Road Transit Center, one of the few locations where streetcars share a stop with the first Brio BRT service. From there cars continue south along North Oregon to a junction with Franklin where it joins the downtown loop. Service is in this direction only.

When asked about whether the 10.5% gradient on the Uptown Loop had been an issue, Sun Metro Assistant Director of Streetcar Operations Carl Jackson explained that there are other US cities – particularly in Pennsylvania – where streetcars had successfully climbed steeper routes and in much worse weather. However, due to the extreme nature of gradient, the PCCs feature speed governors to restrict the maximum operational speed to 56km/h (35mph). The average service speed is much lower than this at around 29kmh (18mph), although a slight increase is seen at the outer ends of the loops. To maximise the progress of the service, limited traffic signal priority has been set up on North Stanton Street.

The system’s 27 stops are built to the same standard as those of the Brio BRT operation, providing passenger information, shelters and seating, but no ticket machines.
The plan to put ticket machines inside the vehicles was scrapped due to budgetary constraints, according to Mr Jackson, so riders have to purchase these in cash or buy passes/ tokens in advance.

In normal timetabled service, five streetcars per hour serve the Downtown Loop with every other car being extended around the Uptown Loop. It takes around 45 minutes to cover the full figure-of-eight that serves key city landmarks such as the Ball Park, Convention Centre and the University of Texas, El Paso Campus.

Six PCC cars have been refurbished and modernised by Brookville Equipment Corporation of Pennsylvania. TAUT was able to see some of the 14.3m-long, 2.6m-wide cars before refurbishment on its 2017 visit and while the bodies and interiors were clearly in a sorry state, the structure and trucks were largely intact. The makeover includes three classic liveries of the 1950s, ’60s and ’70s that were in use prior to closure and a vast amount of attention paid to 21st Century passenger amenities such as improved heating, ventilation and air conditioning systems and Wi-Fi capability. These are installed within a roof-mounted pod to minimise the visual intrusion to the vehicles’ classic lines. A wheelchair ramp is provided at the centre door. Power is provided at 600V dc by means of an overhead pantograph; the cars originally used two trolley poles.

The refurbishment was not as straightforward as planned, Mr Jackson said. When the cars were stripped at Brookville it was discovered that there was more rot than expected inside some of the bodies. This significantly lengthened the timetable and largely explained why the last car was not received back in El Paso until just after the system opening. The ride is excellent, although a little noisy, and shows the quality of the original design that is now more than 80 years old. The cars were new to San Diego in 1937 and were purchased by El Paso in 1950 when San Diego closed its first-generation system.

The cars are stored and maintained in a new purpose-built depot that includes the system’s management offices, constructed next to the large Downtown Transit Center. This terminus provides easy interchange with city buses, including the Brio BRT service. Once again, the favourable climate allows some of the six-car fleet to be stored overnight in the open in the depot’s secure yard.

Mr Jackson explained that the other major impact of the tight project budget is the lack of any loops on the single-track system. In the event of a breakdown, if the car cannot be fixed on the spot then it can be pushed by a following car to the car barn. This is a slow and tedious operation that could severely impact service, but was one of the necessary compromises, he said.

Brio – and the future

The other developing part of the transport offering in El Paso is the BRT system marketed as Brio (Spanish for ‘verve’ or ‘energy’). Four limited-stop routes are planned, with one in operation and three under construction.

By their geographic reach the BRT routes will have more a obvious impact than the streetcar on encouraging fewer trips by private car; the objective is to halve commuting times through less frequent stops, but with dedicated stations and the greater use of pre-payment reducing dwell times. Ticket machines that accept both cash and cards are installed at each stop and the honour system necessitates a vigorous ticket checking regime.

The first BRT line is the 13.8km (8.6-mile) Mesa corridor which opened in October 2014 and has 22 stops. Brio services take advantage of signal priority at junctions, unlike the bulk of the streetcar alignment, another casualty of the ‘value engineering’ process’. New 18.5m articulated buses running on compressed natural gas from Canadian-based manufacturer New Flyer operate the service. The Mesa line cost USD27.1m to build, USD15.6m of which came from FTA grants, with USD5.5m from the State of Texas and the remainder funded locally.

While Brio has many of the benefits of light rail, it cannot shift as many passengers. However, Sun Metro has made it clear that the BRT corridors could be converted to light rail sometime in the future as and when funding allows, and common design features would certainly enable this transition. During our 2017 visit, we wondered whether the lack of dedicated lanes would erode some of the benefits of the service and from our experience 18 months later, although there are a small number of such lanes in the downtown area, the same doubts persist.

As well as the potential for Brio conversion, the city has plans to expand the streetcar service. Phase Two would add a loop to include the Medical Center of the Americas, with Phase Three including the ultimate aim of restoring service to Juárez. Both of these routes are currently being studied.

Against the prevailing wisdom shown by the current national leadership, the majority of El Paso residents view the border with Mexico as an ‘opportunity and not a threat’, an oft-repeated view of City Councilman and streetcar champion Peter Svarzbein. The recently re-elected Svarzbein views a trans-national service as a fantastic economic boost for the region, enhancing relations between the sister cities.

With passionate advocates on both sides of the border, one can only hope that it is only a matter of when, not if, El Paso’s streetcars return to Juárez. The route choice and construction are the easy bit. Far more challenging are the local, state and federal planning and regulatory hurdles still to come.

Many thanks once again to Carl Jackson for his assistance in the preparation of this article.