A Euro a day keeps the climate crisis at bay 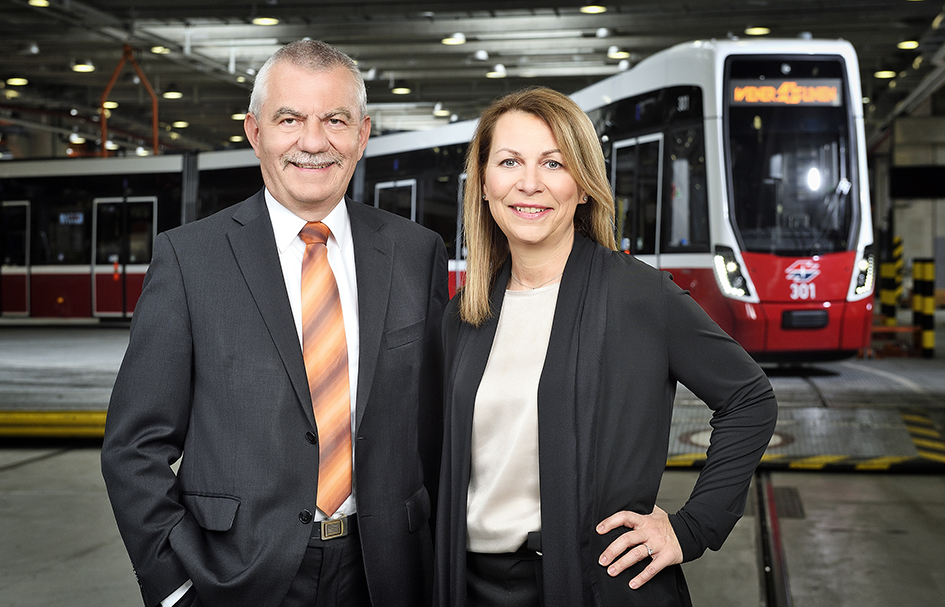 Wiener Linien CEO Günter Steinbauer (left) and CFO Alexandra Reinagl, seen in front of one of the city’s latest Flexity Wien low-floor trams (this image was taken before the national requirement for social distancing and face coverings was introduced). All images courtesy of Wiener Linien

Vienna has been recently named the “World’s Greenest City”. In the latest index published by Resonance Consultancy on Earth Day 2020 (22 April), the Austrian capital beat the German cities of Munich (second) and Berlin (third).

The criteria defining this ranking included analysis of the percentages of public green space, total energy needs served by renewable sources, population who use public transportation to go to work, the level of air pollution, per capita water consumption, walkability, availability of city-wide recycling and composting, as well as the number of farmer’s markets providing sustainable produce.

With almost half of Vienna’s residents holding an annual travel pass, paying a Euro a day, the city is currently regarded by many as ‘the European benchmark for public transit’.

Prior to COVID-19, 2.6m journeys were made on the capital’s extensive public transport network each day. Wiener Linien (WL) has followed a multi-modal approach for residents and visitors alike, seeking pragmatic ways to cover the ‘first and last mile’ issue within its WienMobil initiative. WienMobil stations connect public transport hubs with environmentally-friendly onward travel modes like citybikes, car-sharing, and e-scooters. WienMobil is also the name of the mobility app which combines this portfolio into a single app, offering  a convenient way to plan and pay for journeys – no matter whether you want to buy a tram or metro ticket, reserve a car, or order a taxi.

Around 50% of residents have the annual ticket that costs EUR365 and offers unlimited travel. This initiative was introduced in 2012 and has further increased the use of public transport; in 2019, 852 000 such tickets were sold (a record high), an increase of 30 000 over the previous year. More people in Vienna therefore now have an annual public transport ticket than own a car.

The statistics are striking: 38% of all journeys in Vienna are now made using public transport, corresponding to 29% by car, 26% on foot, with the rest (7%) by bicycle. It is hardly surprising then that the model has drawn a great deal of attention from other cities keen on driving a similar modal shift.

Alongside the obvious cost-effectiveness of public transport, another key reason for its popularity is convenience – around 90% of the population have a tram, bus or underground stop within walking distance.

Environmental benefits are a further key driver as each person using public transportation helps to reduce the city’s CO2 emissions every year. Wiener Linien prides itself on its reputation as ‘Greener Linien’, continually looking at initiatives to further improve its environmental performance.

Several recent initiatives are noteworthy. One that has gathered a lot of interest is a programme to reduce urban heat build-up through the implementation of ‘green-roofed’ tramstops. This is ongoing, with the next installation being setup in July in front of the Austrian Houses of Parliament.

At the Spittelau U-Bahn station (served by lines U4 and U6, also offering interchange with tramway, bus and regional rail services), ‘green islands’ will be created as well as the covering of the walls of the station itself with more than 4600 different plants. Elsewhere on the metro, photovoltaic films have been installed recently to generate clean electricity at the U3 station in Ottakring. This is used to operate escalators, elevators and lighting; in peak times, up to 50% of the energy required to operate the station now comes from solar energy.

In a more visible demonstration of the city’s environmental credentials, green light rail tracks are installed on many parts of the network to help redevelop biodiversity. The RemiHub project also enables the delivering of packages by freight bicycles directly from WL depots in the inner city.

By 2030 over two million people will live and work in Vienna. In order to keep pace with this growth, services have to be further expanded and modernised. As part of this programme, U-Bahn line U2 will be extended from Rathaus by 6km (3.7 miles) to Wienerberg – with six new stations, making it the longest line in the city. The driverless U5 line, that incorporates part of the existing U2 alongside 3km (1.9 miles) of new tracks, will also mark a first for the city.

With the nationally-imposed lockdown measures to prevent the spread of COVID-19 and ‘flatten the curve’ starting in mid-March, WL’s ridership decreased by as much as 80%. Even with such a dramatic reduction in patronage, the priority remained for safe and efficient seamless journeys for essential workers.

Vehicles are regularly and thoroughly cleaned and disinfected, face masks are compulsory for travel, rear door boarding is required on buses and trams and doors open automatically. For all employees, WL has provided reusable fabric face masks and 3D-printed protective face shields (designed and produced in-house) to make work on construction sites and in workshops more bearable under these challenging conditions. Thousands of these protective items have been produced.

As well as safeguarding employees, operational and security staff across the WL network inform passengers about the regulations to keep everyone safe.

This range of measures has proved very effective in eliminating transmission of the novel coronavirus. A study conducted by the Austrian Agency of Food Safety indicates that no registered infections can be traced back to public transport. Passengers have adapted to the new measures well and the vast majority of riders voluntarily comply.

“We managed to keep essential services running, knowing that we had an obligation to the community. We were extremely quick to implement measures to keep both our employees and passengers safe. Urban mobility needs to be safeguarded and public transport plays an essential role here,” said WL CFO Alexandra Reinagl.

In an effort to reduce some of its revenue losses and in a gesture of goodwill towards customers, WL has extended the validity of student passes for the spring-summer semester throughout the summer holiday period until 30 September.

One of the world's great tramways

The most easterly of Austria’s tramways, the capital’s network covers 220km (137 miles), making it one of the most comprehensive in the world. It is joined by 83km (51.5 miles) of U-Bahn lines and bus routes covering almost 850km (530 miles). Represented across the 23 municipal districts, coverage is less extensive in the east, but west of the central area trams provide intricate street coverage of a type long-gone from most cities. Electrified in 1897 (at 600V dc), the system’s longest line is around 14.5km (nine miles), the shortest 3.4km (2.1 miles). Most routes run on surface alignments, although tunnels in the south of the city are still used by city and interurban trams. Viennese transport is covered by the regional timetable and fare co-ordination body, Verkehrsverbund Ost-Region. Both tramway and metro rolling stock have been locally produced for decades. Three variants of the high-floor E class (motor and trailer units) trams were delivered in the three decades to 1990, and low-floor variants from Siemens (the ULF, developed specifically for Vienna) and more recently Bombardier (Flexity Wien – 119 vehicles on order, with an option for a further 37) should see the remaining high-floor cars withdrawn within the next five years. 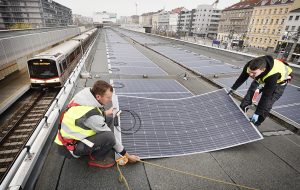 Installation of the photovoltaic panels at Ottakring U-Bahn station; the panels can provide up to 50% of the station’s energy needs.

Austria was one of the first European countries to relax confinement measures and travel restrictions; since 18 May, operations have returned to pre-COVID service levels and passengers are gradually returning; more than 70% of passengers have now returned to the network.

Although service frequencies cannot be increased further without a long procurement process for new vehicle orders, overcrowding has so far not been an issue. “The pandemic has hit us all hard, but we should never forget that we have an even bigger crisis that we need to tackle: the climate catastrophe. Public transport will play a key role in overcoming this challenge,“ says CEO Günter Steinbauer.

Greenpeace Austria recently conducted a survey to gauge opinions surrounding climate change: 90% stated that they felt climate change already affected their daily lives, while 84% believe that tax revenues should be used to boost the economy following the pandemic as well as to mitigate climate change. 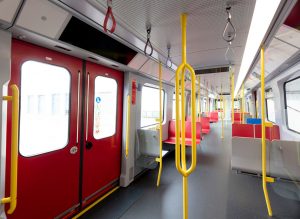 The interior of one of the new X-type metro trains – produced by Siemens – for the future driverless U5 U-bahn line, due to open in 2024.

“Prior to the pandemic we had reached a peak and public transport was more popular than ever. Over 852 000 customers hold an annual ticket, and modal share amounts to 38%. Now cars are getting more popular again and everything we have achieved to date is put at peril,” explains Ms Reinagl.

With this mind, the focus is now on getting passengers back to using public transport. “Every person in Vienna has a public transport stop within roughly 300m of their home. The main challenge now consists of restoring trust in public transport, as well as overcoming the challenge around the famous ‘last mile’”, concludes Mr Steinbauer.