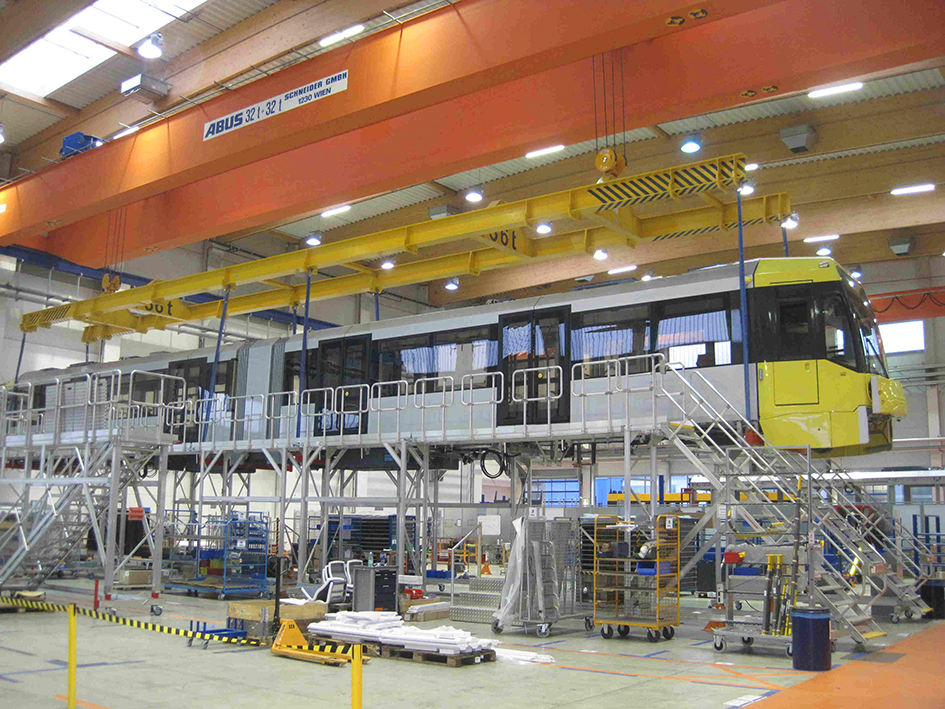 Although closely resembling the network’s existing 120 vehicles, the latest batch of Flexity M5000 trams for Greater Manchester will add a number of key technical and passenger enhancements for the ever-growing UK system.

Last year the region celebrated 25 years of second-generation tramway operation (see TAUT 960 for its Metrolink @ 25 special) and since May 2014 has been exclusively served by M5000 vehicles supplied by a consortium of Bombardier Transportation and Kiepe Electric. From the first deliveries in December 2009, six tranches of the high-floor trams have replaced the original Firema/Ansaldo T68 and T68A fleet, while also catering for a network that has grown from 31km (19 miles) upon opening to over 97km (60 miles) in 2018. The latest order, placed by Transport for Greater Manchester on 29 June, is worth GBP72m (EUR81m) and will increase fleet capacity by 15%.

Built at Bombardier’s facilities in Bautzen and Vienna, and utilising Kiepe Electric traction equipment and drive systems, the first of the new trams is due in Spring 2020, with subsequent deliveries following on a monthly basis until June 2021.

Passenger enhancements for the latest batch include OEM Wi-Fi connectivity (the rest of the fleet was retrofitted in 2015 as part of a TfGM initiative to provide free Wi-Fi for Metrolink passengers) and energy-efficient LED saloon lighting, alongside a new rail head friction modifier for quieter running and a passenger counting system.

As well as increasing capacity and allowing for enhanced headways, the new trams will also be used for the future Trafford Park line that is due to open in 2020. A major milestone on this new 5.5km (3.4-mile) line was reached in late September with the completion of the laying of beams for a new 29m bridge over the Bridgewater Canal. Installed over a single weekend, the deck is to be completed later in the year to allow tracklaying to begin in 2019.

The first rails were laid at the intu Trafford Centre – terminus of the new GBP350m (EUR393m) line – during the summer, joining similar works at EventCity, Parkway, Village Way and Warren Bruce Road. The Trafford Park line is being funded by Greater Manchester’s ‘Devolution Deal’, signed by city region leaders in 2014.

Safety and subways in Manchester

The growth of Metrolink is one of the undoubted success stories for modern light rail. In its first year of operation, the system carried eight million passengers; by 2010, when the first M5000 trams entered service, ridership had grown to 20m. By 2018, this had more than doubled again to 42m journeys – a growth of 9% from the year before.

The latest tram order is part of the wider ambitions of both Transport for Greater Manchester and Mayor Andy Burnham’s 2040 Transport Strategy, which also aims to encourage sustainability through greater promotion of cycling and walking allied to approaches aimed at improving air quality.

By 2040 the population of the conurbation is expected to rise to three million, with annual Metrolink journeys set to surpass 50m.

In announcing the order, Mr Burnham said: “Greater Manchester is growing. That means more jobs, more people and more demand on our public transport networks and these new trams will be a very welcome – and much needed – addition to the Metrolink fleet.”

Then Bombardier UK Managing Director Richard Hunter, commented: ‘‘We are proud to support Andy Burnham’s aim of encouraging people across the city-region to leave their cars at home.”

Bombardier has delivered around half of the UK’s modern light rail vehicles over the last two decades, supplying systems in Croydon, Nottingham, Manchester, Blackpool and London’s Docklands Light Railway.

Due to its primary use of repurposed heavy rail infrastructure, with additional street-running sections, the high-floor M5000 is a unique model tailored to the specific needs of Metrolink, while also benefiting from the ongoing development of Bombardier’s Flexity family of trams in use in cities worldwide.

With a length of 28.4m, each tram has a capacity of 206 (at four passengers/m²) and they regularly operate in double consists on the system’s busiest services. The addition of 27 new vehicles will allow this operational flexibility to be cascaded to further routes as ridership grows in the coming years.

With impressive reliability in terms of 0mean distance between service failures, the M5000 has become the iconic yellow and silver face of Metrolink. Since the vehicles’ introduction, the fleet has clocked up 67.5m/km in passenger service.

Danny Vaughan, Head of Metrolink at TfGM, said: “Metrolink sits at the heart of Greater Manchester’s sustainable transport network, carrying more than 42m journeys every year. That means less congestion on our streets and less pollution in our air.

“These enhancements to the new trams will help improve our passengers’ journeys, in particular the new on-board counting system, which will provide us the data so that we can adapt and improve the network to better serve our customers’ needs.”

With rolling stock choices determined by the system’s origins, the benefits of high-floor may yet prove to still to be fully realised. Greater Manchester’s fleet lends itself more obviously to tram-train operation than some others in the country that are primarily
low-floor, as it removes the need for dual floor height vehicles.