Forchbahn: Fit for the future 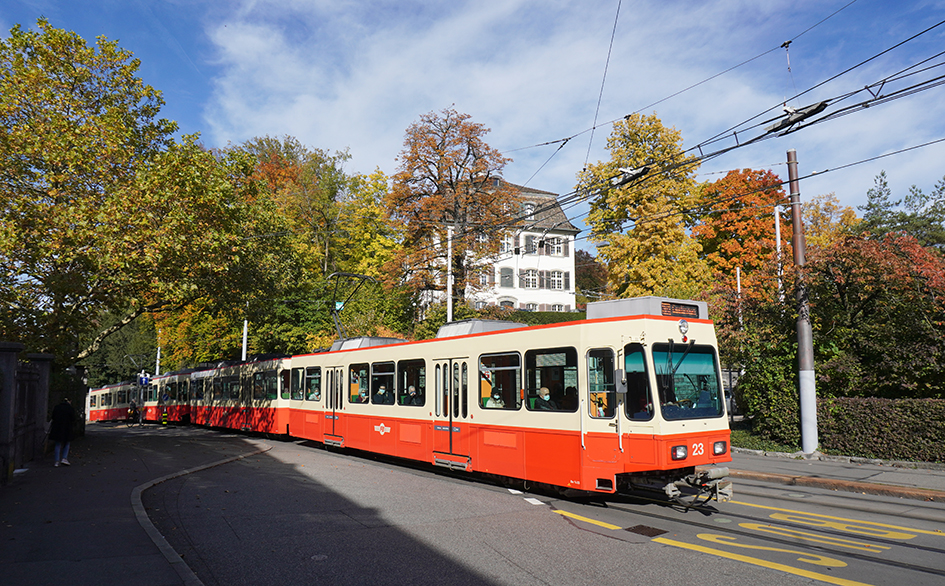 The Forchbahn is integrated into Zürich‘s S-Bahn network and FB trains run as line S18. Framed by autumn colours, Be 8/8 23 is on the urban section of the Zürich tram network near Kreuzplatz. Image courtesy of Andrew Thompson

The suburban Forchbahn (FB) connects communities south-east of Zürich with the centre of Switzerland’s largest city. Originally opened in November 1912, the metre-gauge line was electrified from the outset. The FB’s speciality is that for the first 3.3km (two miles) of its route it uses Zürich’s urban tram network between the city centre terminus Bahnhof Stadelhofen and Rehalp, before switching onto a segregated alignment for the remaining 13km (eight miles) to its southern endpoint
of Esslingen. Inside the city, the FB operates like an urban tramway with street-running throughout, while outside of Zürich it is classified as a railway and attains speeds up to 80km/h (50mph).

Much of the FB’s current infrastructure dates from a previous period of modernisation implemented during the 1960s and ’70s. As such, many of these structures are now in need of renewal or adaptation to contemporary accessibility requirements. At the same time, a surge in demand is expected as the population in its catchment area is forecast to grow by 4% until 2030 and its political mandate is to increase the modal shift between private mobility and public transport from 60:40 to 50:50. In particular, the expanding medical facility at Balgrist and the new children’s hospital to be built there by 2024 will ensure constant high demand on the urban stretch of track in Zürich.

In order to be fit for the future and enhance its operations, the FB presented an ambitious investment programme in October 2021. Labelled Frieda 2030 in reference to the railway’s colloquial nickname ‘Tante Frieda’ (Auntie Frieda), the programme has a budget of approximately CHF325m (EUR312m)
and is largely funded by Canton Zürich, with additional contributions from the Swiss Federal Government. 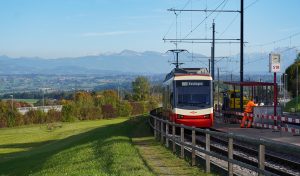 In October 2021, accessibility improvements are already underway at Neuhaus station, with platforms being raised to provide barrier-free entry into the low-floor trains. As part of the construction works, one platform is therefore closed with single-track running in effect.

The investment package includes 25 separate projects, dispersed along the 16km (ten-mile) route. The single most expensive budget item, to the tune of CHF95m (EUR91m), is the planned procurement of eight new 75m low-floor LRVs by 2027. This unprecedented vehicle length would make these XL units the longest LRVs in Switzerland. Currently that distinction is held by the 52.6m-long ABe 8/12 Stadler Tangos, which have been in use on the Appenzell – St Gallen – Trogen through route since 2018 and are designed for the various street-running sections along that metre-gauge line.

Globally, the longest trams currently deployed in passenger service are the 55.9m CAF Urbos cars running on Budapest’s outer ring. If no other extra-long LRVs are built and rolled out before 2027, the future FB fleet will therefore set a new record.

The procurement is purposely intended to take five years, with a winning bidder only being chosen by 2024 and production not commencing until 2025, as a bespoke depot will need to be built first. An additional CHF50m (EUR48m) has been budgeted to construct a 130m-long and 30m-wide shed with four maintenance tracks at the FB’s Forch base, just south of the station site. The current Forch depot dates from 1970 and is only designed to accommodate 50m vehicles; this will be converted into a stabling facility once the new building has opened.

The eight new LRVs will replace all of the remaining Be 8/8 and Be 4/4 high-floor units, together with their matching Bt driving trailers. These vehicles were built between 1976 and 1994 and have recently become more expensive to operate as off-the-shelf spare parts are no longer available from the manufacturers. Together with the 13 partially low-floor Be 4/6 Tango type that Stadler supplied in 2004-05, the future FB fleet will be completely low-floor.

This initiative goes hand-in-hand with plans to make all stations along the line fully-accessible. In some instances, like at Waldburg and Neue Forch, this requires elaborate – and expensive – civil engineering measures to facilitate the installation of new ramps, lifts and underpasses. Numerous existing platforms also need to be raised and widened. In late 2021 such platform improvements were under way at Neuhaus, with work expected to last until spring 2022. 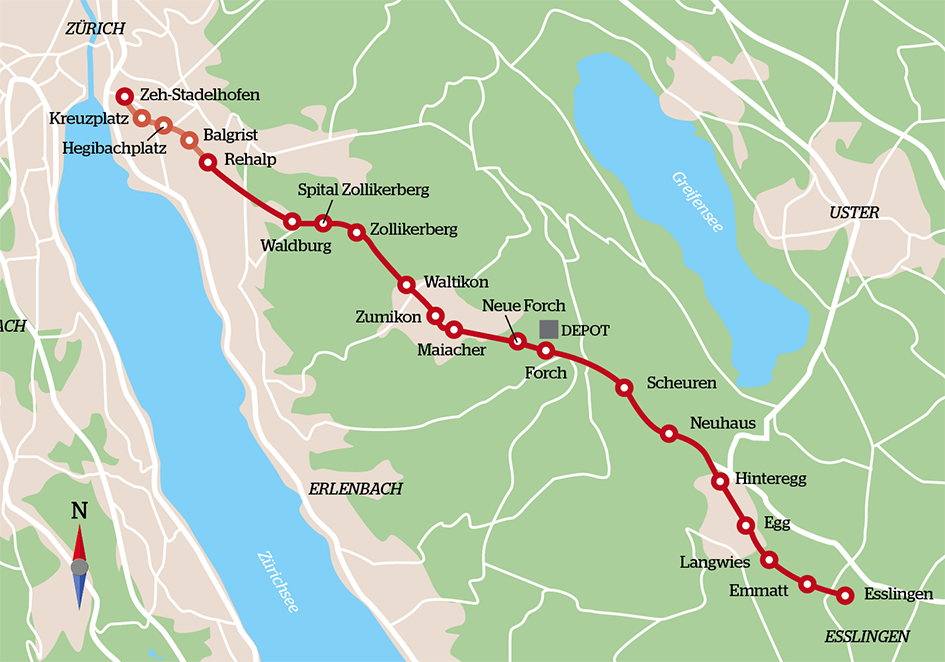 FB also plans to increase safety along its route by eliminating the last three unprotected level crossings at Zollikerberg and Egg, while fitting the last 7km (4.3 miles) of route between Waltikon and Hinteregg with electronic signalling. These combined measures will account for CHF15.5m (EUR14.9m) in expenditure.

At a cost of CHF50m, the last single-track section between Zürich and Forch will be doubled to boost capacity and operational resilience. This roughly 800m-long bottleneck between Neue Forch and Forch frequently causes delays, since a busy 15-minute headway is in place there. On the more rural southern section from Forch to Esslingen, trains only run every 15 minutes during weekday peaks, otherwise reverting to a 30-minute interval.

The double-tracking upgrade will require land acquisition and significant earthworks, in order to widen and straighten the current trackbed. Construction is scheduled to last three years, beginning in 2023. The other planned double-tracking measure will already be implemented in 2023-24 at a cost of CHF10m (EUR9.6m). This will create a dynamic passing loop at Scheuren station and extend the current double-track section within the station limits for a further 250m north to the eastern portal of the 282m-long Forch tunnel.

The line’s other tunnel, the 1758m Zumikon tunnel beneath the namesake village centre, is also in need of comprehensive renovation after almost a half-century of use. Opened in 1976, this double-track tunnel accommodates the two calling points Zumikon and Maiacher. As part of the planned upgrade, the tunnel will be fitted with concrete slab track, while an overhead conductor rail will replace the current catenary. In order to ensure continuous railway operations during the two-year rebuilding period from 2022 to 2024, only one track will be closed at a time, with construction work undertaken
24 hours a day.

The pricetag for this essential piece of infrastructure renewal is CHF25m (EUR24m). Also, in order to guarantee the stability of the timetable, the most extensive projects will be carried out in stages so that only one major construction site is open per route section during ongoing operations.

Prior to the pandemic, the FB transported over 6.2m passengers in 2019. By the end of this decade, it expects this figure to have grown by 25%, in large part thanks to the Frieda 2030 enhancements.