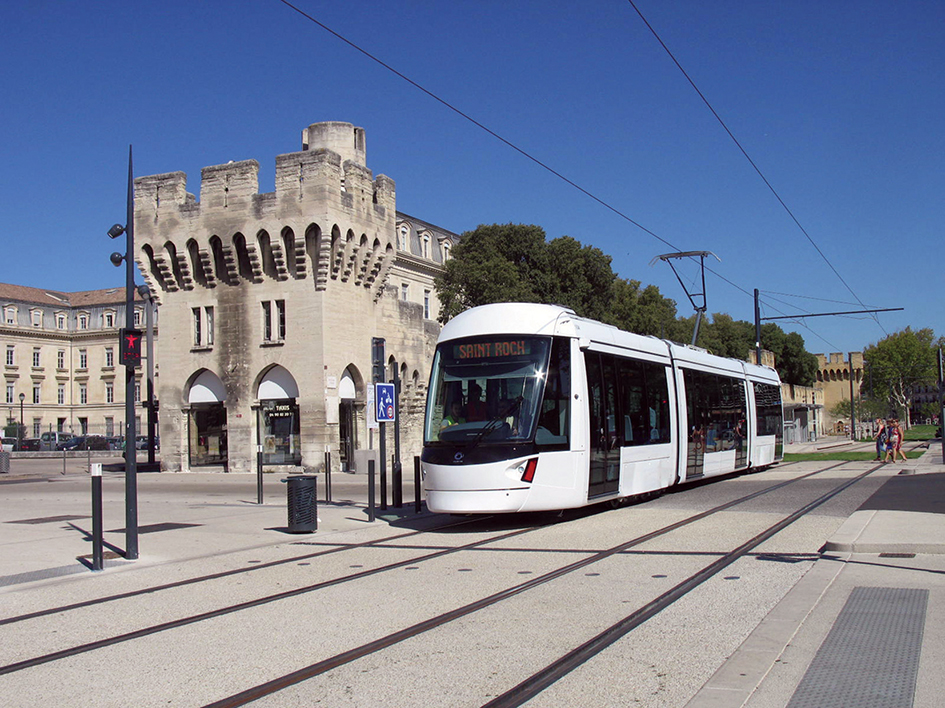 In 2023 this will also interchange with T2, running from Piot (Pont Édouard Daladier) to St-Lazare (Université Arendt). The same year will also see T1 diverted onto a short branch through the city walls from République to Jean Jaures. There are plans to extend line T2 to reach Opéra Grand Avignon in the second half of the decade.

Construction work in Avignon was supposed to start earlier in 2016, but this was delayed by the newly-elected city mayor, who wanted to cancel the scheme due to fears over disruption after witnessing the scale of the works in Besançon. The Avignon scheme agreed in 2010 had been for a new tramway of two lines totalling 14.4km (8.9 miles), worked by 24 Citadis Compact (205) low-floor trams, and estimated to cost EUR250m.

Discussion between the agglomeration and the city saw a reduced EUR135m project agreed and this was approved by Grand Avignon in January 2015.

Negotiations with Alstom resulted in the order for compact 24m four-axle trams being reduced to ten (at a cost of EUR25m), with four more due in 2023. The first of the 2.4m-wide vehicles was delivered in December 2018 and the last in September 2019, arriving by road from the factory at La Rochelle. This fleet will permit a six-minute peak headway on line T1, with each tram carrying up to 150 passengers.

Service is provided 06.00-22.30 (24.00 Friday/Saturday) and is handled by a subsidiary of Transdev, under the new Orizo brand. A depot has been built at Place des Maraichers at Saint-Chamand.

Avignon is a historic city on the left bank of the river Rhône in south-east France. Home of the papacy from 1309 to 1377, it has a population of 275 300. The city itself has a population of 91 000, with 12 000 living in the historic centre – a UNESCO World Heritage Site – that is enclosed by medieval ramparts. Avignon’s first-generation tramway closed in 1932.

Since the start of France’s modern tramway revolution, more than 1350 new trams have been delivered. Of those, 75% have come from French manufacturer Alstom, which also supplies a range of equipment for operating away from the overhead wire.

The renaissance began with Nantes in 1985, and has embraced systems from the tiny (Aubagne, a short line in a suburb of Marseille) to the large (cities such as Lyon and Strasbourg).