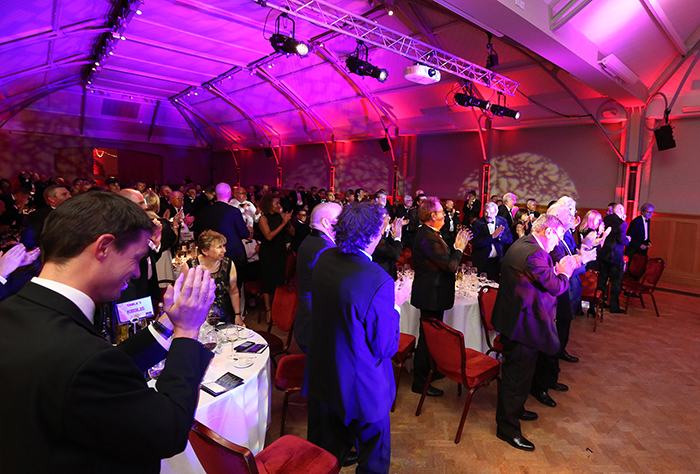 Both of the Judges' Special Award recipients received a standing ovation from the audience. (Jon Hill)

New UK Parliamentary Under-Secretary of State for Transport Paul Maynard told the Global Light Rail Awards on 5 October “you definitely have a supporter here today”.
He said he looked forward to working with UKTram to push costs down and added “I’m not new to the sector as I have seen the tramway develop in Blackpool and know its importance to the community… I want there to be more and more systems competing to win these awards”.
Mr Maynard is the Member of Parliament for Blackpool North and Cleveleys and was appointed in July, replacing Andrew Jones. The politician was speaking at the awards ceremony in London, at which he helped hand out awards to organisations as diverse as Spain’s Tranvía de Zaragoza and Pre-Metro Operations, which operates the UK’s Stourbridge Branch with a Parry People Mover railcar.
In a packed hall, winners also included Nottingham Express Transit and Edinburgh Trams for the Most Improved Systems, and Metrolink RATP Dev, named Operator of the Year for its work in Manchester. However, perhaps the greatest applause was reserved for two individuals who won special awards from the event’s judges: London’s First Tram Operations Managing Director John Rymer, and Manchester’s Dave Skirrow, who has led attempts to improve safety through improved
under-run protection.
Next year’s ceremony is to be held on 4 October 2017.

Supplier of the Year

Manufacturer of the Year

Vision of the Year

Operator of the Year