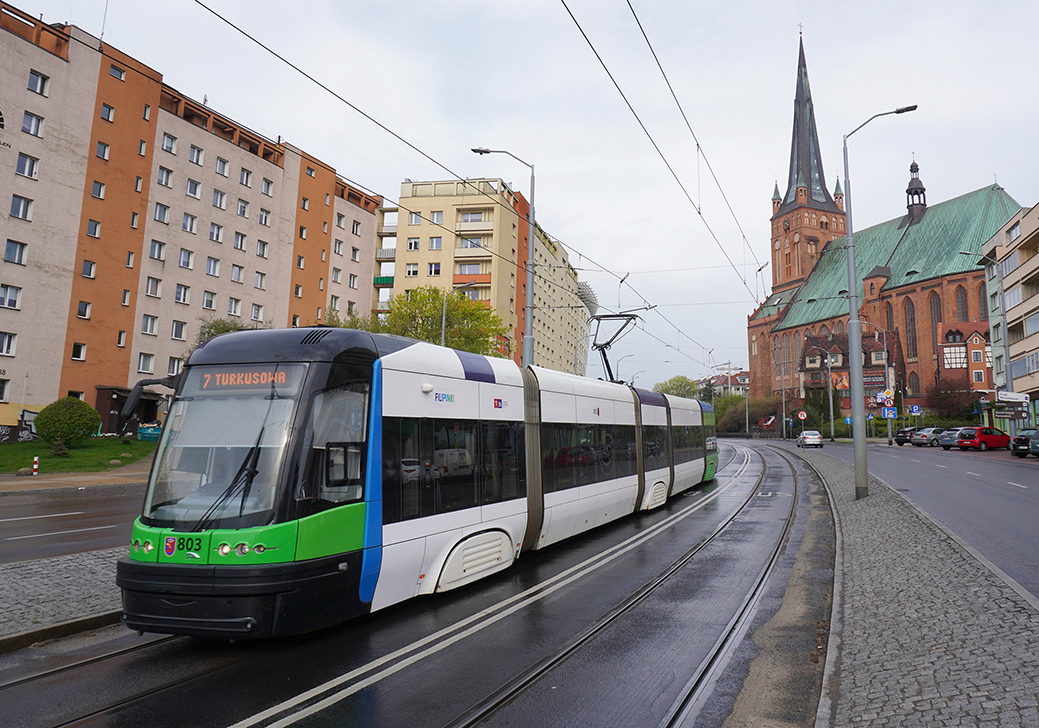 Words and images by Andrew Thompson

With a population approaching 400 000 residents, Szczecin is the largest city in north-western Poland and one of the country’s most important ports on the Baltic Sea. Until 1945 and the redrawing of European borders, the city was known as Stettin, famous for its shipbuilding industry and the Vulcan yards.

The city’s municipal tramway dates from 1879, beginning with horse-drawn operations. Electrification began in 1896 and since then the system has grown continuously, with the most recent extension of the rapid tramline on the east bank of the River Odra (Oder) opening in 2015. Like the rest of the city, most of the tramway is on the left (Lewobrzeże) bank. With a preponderance of segregated alignments, about two-thirds of the total, there is still much street-running. In the city centre in particular this takes the form of central tracks. 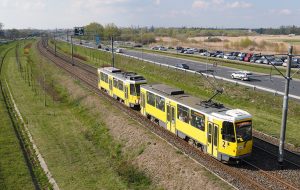 Prior to the fall of the Iron Curtain and during the last decades of communist rule in the 1970s and 1980s, Szczecin’s tramway benefitted from fleet renewal and new Konstal cars – yet matching infrastructure investment fell some way behind. The municipal authorities and public transport operator have been trying to make up for this backlog during the past two decades, with the availability of EU funding proving the main catalyst for phased modernisation.

The tramway is administered by Szczecin’s roads and transport authority, Zarząd Dróg i Transportu Miejskiego (ZDiTM), with operations managed by a limited liability company, Tramwaje Szczecińskie (TS), since 2009. The TS headquarters are located just off revenue tracks near the Krzekowo terminus of lines 5/7 to the west of the city centre.

Major milestones came with the rebuilding of the central Brama Portowa interchange in 2012, the introduction of 28 Pesa Swing low-floor LRVs from 2011-13, enlargement of Pogodno tram depot in 2014-15 and the rebuilding of 13km (eight miles) of tracks in 2018.

In 2020 the riverside junction Wyszyńskiego was renovated and a connector built between Las Arkoński terminus and Aleja Wojska Polskiego junction, thus linking two branches in the north-west to create a radial through line. This was complemented by the reopening of the Głębokie turning loop in late 2020, as well as new track from Aleja Wojska Polskiego to Arena Szczecin. The new Osiedle Zawadzkiego terminus was added at the end of 2021. A similar 600m link is under construction between the Osiedle Zawadzkiego and Krzekowo turning loops to close this last gap in that part of the city.

As of mid-2022, the infrastructure backlog is still substantial however, and much of the city centre is seeing disruption related to extensive track renewals, some of which are expected to last until 2024. These renewals will also improve clearances for the future introduction of more low-floor cars. 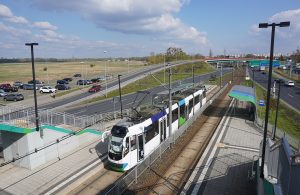 TS is still heavily dependent on cascaded Tatra cars acquired from Berlin between 2006 and 2013. Trams from Chorzów-based manufacturer Konstal (Alstom from 1997) are still in service, although these 105N variants are now seen in smaller numbers.

The incoming German cars include both the T6A2 single units as well as the KT4Dt articulated cars. Several of these still operate in the distinctive yellow livery of Berliner Verkehrsbetriebe (BVG). A number of KT4Dt have already completed light refurbishment and it is planned to overhaul another 12 to 16 units in-house in 2022. Due to the age of these 40-year-old vehicles, retrofitment of low-floor centre modules, as undertaken in cities such as Cottbus or Brandenburg, is not seen as cost-effective.

Tram services in Szczecin therefore still feature a comparably high ratio of vehicles which lack full accessibility. The Pesa Swing remains the backbone of the low-floor fleet and such cars are primarily allocated to lines 2, 7 and 8, which make use of the rapid tram infrastructure and the Turkusowa terminus in the city’s south-east.

The city’s newest LRVs are the articulated Moderus Beta, supplied by Modertrans in three batches between 2014 and 2021. Two single-ended Beta MF 15 AC were delivered in 2014, followed by two more single-ended Beta MF 25 AC in 2018 and finally four double-ended Beta MF 29 AC BD in 2020-21. Under a contract for self-assembly kits, earlier batches were constructed in Szczecin’s workshops with oversight from the manufacturer; later cars were assembled by TS staff at Modertrans’ premises due to the COVID-19 pandemic.

There are currently no plans for major fleet renewal, although EU funds are allowing the purchase of another two double-ended trams in 2022-23. These additions are being introduced with one eye on the creation of future lines and also to cater for the ongoing reconstruction works that often require temporary truncation of city routes.

TS has two active tram depots. Opened in 1934 and subsequently expanded, the large Pogodno facility to the north-west of the city, on routes 9 and 11, was modernised in 2013-15 to maintain the expanded Swing fleet.

Golęcin depot, by the river Odra, was built in 1898 and replaced a horse depot on the same site. This mainly services the older single-ended and high-floor cars.

Looking to the future 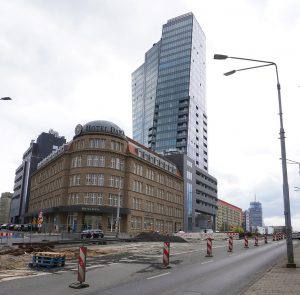 Mid- to long-term network planning is currently centred on proposed extensions west to Mierzyn, the port district Łasztownia and phase two of the rapid tram further east to Kijewo, continuing from the Turkusowa loop to directly serve a number of densely-populated housing estates in the south-east.

With no formal design documentation as yet, exact routes and costs are still some way in the future, but what is significant is that they are being planned for operation by double-ended stock, removing the need for turning loops. There are ambitions to further expand Pogodno depot, as well as adding facilities in Warszewo and Bukowe-Klęskowo to serve the planned new lines.

Recent studies show that the city is placing a firm emphasis on the importance of its tramway in future urban development, reconfiguring bus services to better act as feeders to the network. All of these plans will however once again depend heavily on the allocation of EU funding and grants from the national government.

> This is an abridged version of an article which first appeared in TAUT 1016 (August 2022). The full version contains more images and system maps – buy your copy here.