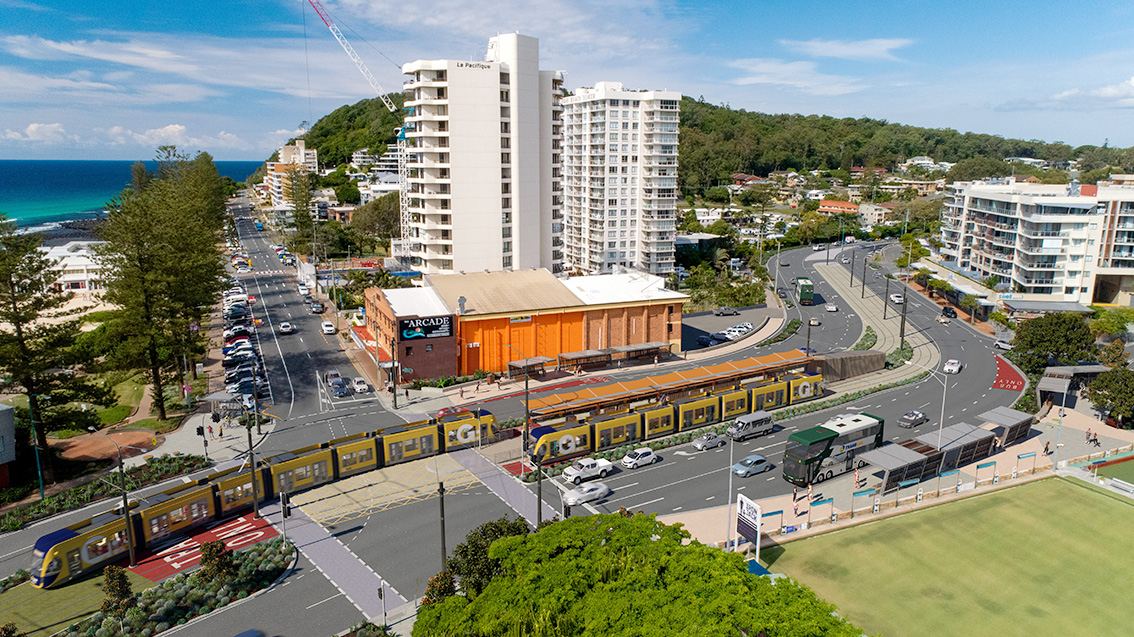 An artist’s impression of the future Burleigh Heads stop, the future southern terminus of the G:link tramway. Courtesy of the Department of Transport and Main Roads, Queensland

A ground-breaking ceremony was held of Stage 3 of Australia’s G:link light rail system on 22 October, with state leaders claiming the creation of up to 760 new jobs in this “significant step” toward its expected completion in 2025.

The first phase of works will include major traffic changes on the Gold Coast Highway to relocate and replace water main, sewer and gas infrastructure. This includes upgrades to the South port depot and essential underground services in Broadbeach and Mermaid Beach.

Premier Annastacia Palaszczuk commented: “If any of the previous stages are to go by, 90% of workers came from the Gold Coast and surrounding regions.

“When complete, light rail Stage 3 will connect 27km [16.8 miles] of the Gold Coast to reliable and accessible public transport all the way from Helensvale to Burleigh Heads.”

The Premier reiterated that light rail had been an “essential part” of the delivery of the 2018 Gold Coast Commonwealth Games and would play an even “more important role” in the 2032 Brisbane Olympics.

Patronage on the tramway has risen significantly in recent months to become the only mode of public transport in Queensland to have surpassed pre-pandemic levels.

“We have continued to see steady growth as life returns to normal with patronage across SEQ last week sitting at 78.4% compared to 2019,” noted Queensland Transport and Main Roads Minister, Mark Bailey.

“But light rail continues to set the benchmark and has hit 100% of pre-COVID levels for a full week — the first time any mode has done this since the pandemic started. We’re putting this down to booming tourism, commuters returning to the office and students back in the classroom.”