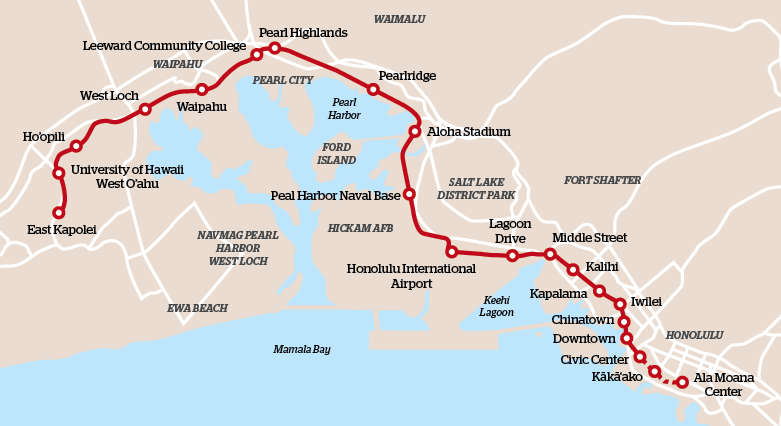 The HART approval echoes Mayor Rick Blangiardi’s aim of completing the project as far as Civic Center within the current funding envelope to allow passenger service to begin as soon as possible. This removes the intermediate station of Kaka’ako and the planned Ala Moana Center terminus, shortening the line by more than 1.6km (one mile).

Stopping at Civic Center would reduce the number of people who will the system by nearly 30%, according to a recent HART report. The original projected ridership of 119 600 trips/day in 2030 would decline to 84 000 with a shorter line.

The city’s transportation committee must now give its final approval, although a bigger hurdle remains with the US Federal Transit Administration. When the city signed a Full Funding Grant Agreement with the FTA in 2012, the project was budgeted at USD5.2bn billion for 21 stations and 32km (20-mile) of elevated line between East Kapolei and Ala Moana.

The latest cost projection is that even the line from East Kapolei to Civic Center will cost USD9.93bn, including financing costs.

HART Executive Director Lori Kahikina said she believed there was a good chance the FTA would accept the changes, adding that: “We had to do a risk refresh with them and all of the communications on the risk refresh was the truncated scope –everything else that we’ve been discussing with them on our estimate at completion has been the truncated scope. So I’m fairly confident that they will be okay with that, where the scope is at Civic Center and deferral of Pearl Highlands parking garage.”

Both the Mayor and HART have said the line could be extended at a later date, but in the meantime an intensive bus service would be introduced from Civic Center to Ala Moana.