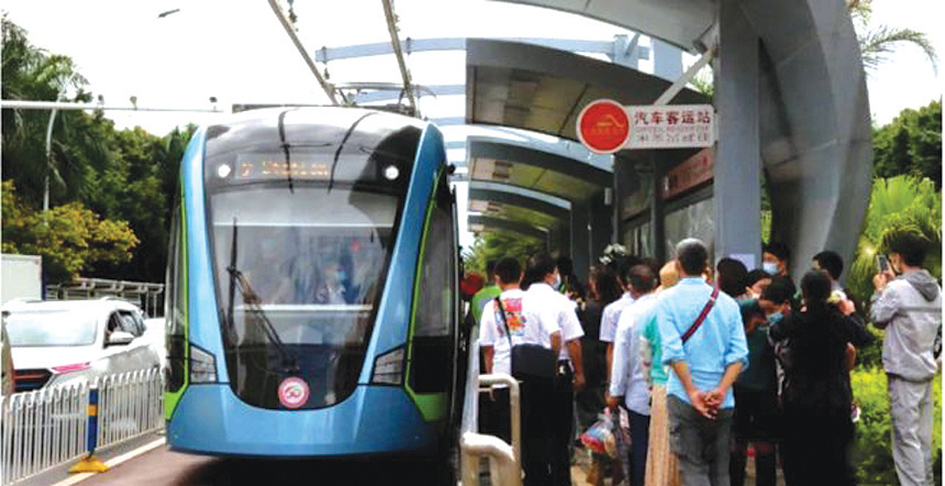 A view from the opening day of the Honghe tram in Mengzi. Image courtesy of CRRC

On 1 October the first 13.3km (8.3 miles) of a new tramline in the Chinese city of Mengzi started carrying passengers; it is the country’s 18th tramway of the modern era.

Mengzi is a city in Yunnan Province, approximately 175km (109 miles) south-east of Kunming, with a population of 430 000. The new Honghe tramway runs from the North Railway Station south across the city to the Central Bus Station. A ten-minute service is provided 07.45-21.45.

A further 5km (three miles) is under construction and a 62km (38.5-mile) four-line system is planned for an investment of CNY6.6bn (EUR841m). The line is a Public-Private Partnership between Yunnan Construction Engineering Group (YCEG) and Honghe Prefectural Government. YCEG is the operator under the 30-year contract.

Trial operation started as long ago as May 2016, but for financial reasons, operation of a dummy timetable was not possible until 21 September 2020. All passengers wishing to board must have their temperature checked by platform assistants, and must wear face coverings.

CRRC Nanjing Puzhen has delivered a fleet of 34 five-section double-ended low-floor trams that are fitted with supercapacitors to permit wire-free operation; recharging is undertaken with stop-based infrastructure.

A further 13 modern light rail systems are reported to be under construction in China, at Baoshan, Chongqing, Dujiangyan, Delinga, Guiyang, Jiaxing, Kunming, Lijiang, Nanping, Turpan, Wernshan, Xi’an and Zhangye. All 13 are planned to open within the next decade.