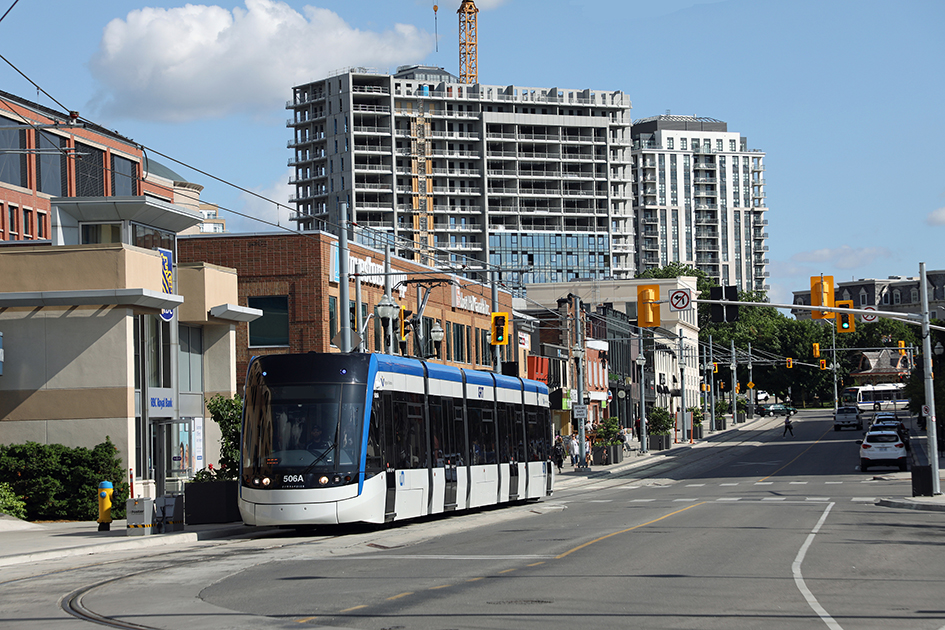 The first stage of the ION light rail line in the Region of Waterloo, Canada, was inaugurated at a ceremony at Fairway stop in Kitchener on 21 June. The 19km (11.8-mile) route in Quebec’s ‘silicon valley’ features 19 stops on a mostly-segregated route between Congestoga Mall in Waterloo and Fairview Park Mall in Kitchener.

Travel was free until 1 July and peak services run every eight minutes, reduced to every 15 minutes at other times, starting at 04.36 and running until 01.45. Over 73 000 passengers were recorded on the opening weekend.

The project was awarded on a PPP basis to the GrandLinq consortium of Keolis, Plenary Group, Meridiam, Kiewit and Aecon in March 2014, including ten years of operations and 30 years of maintenance.

Originally planned to open in Spring 2018, delays related the delivery of 14 Bombardier Flexity Freedom low-floor LRVs (built at the manufacturer’s Thunder Bay and Kingston plants under a CAD66m (EUR45m) contract signed in 2013m that includes options for a further 14 vehicles), saw the opening date pushed back, first to the end of last year and then into summer 2019.

The 30.2m five-section vehicles have a capacity for 200 passengers, 57 seated.

Stage 1 also includes a 17km (10.5-mile) Bus Rapid Transit route that continues from Fairview Park Mall to Ainslie Street in Cambridge, which opened in September 2015. Stage 2, which is still in the planning stage, will see this converted to light rail operation to provide a seamless 36km (22.4-mile) journey, with 26 stations, between Waterloo and Cambridge.