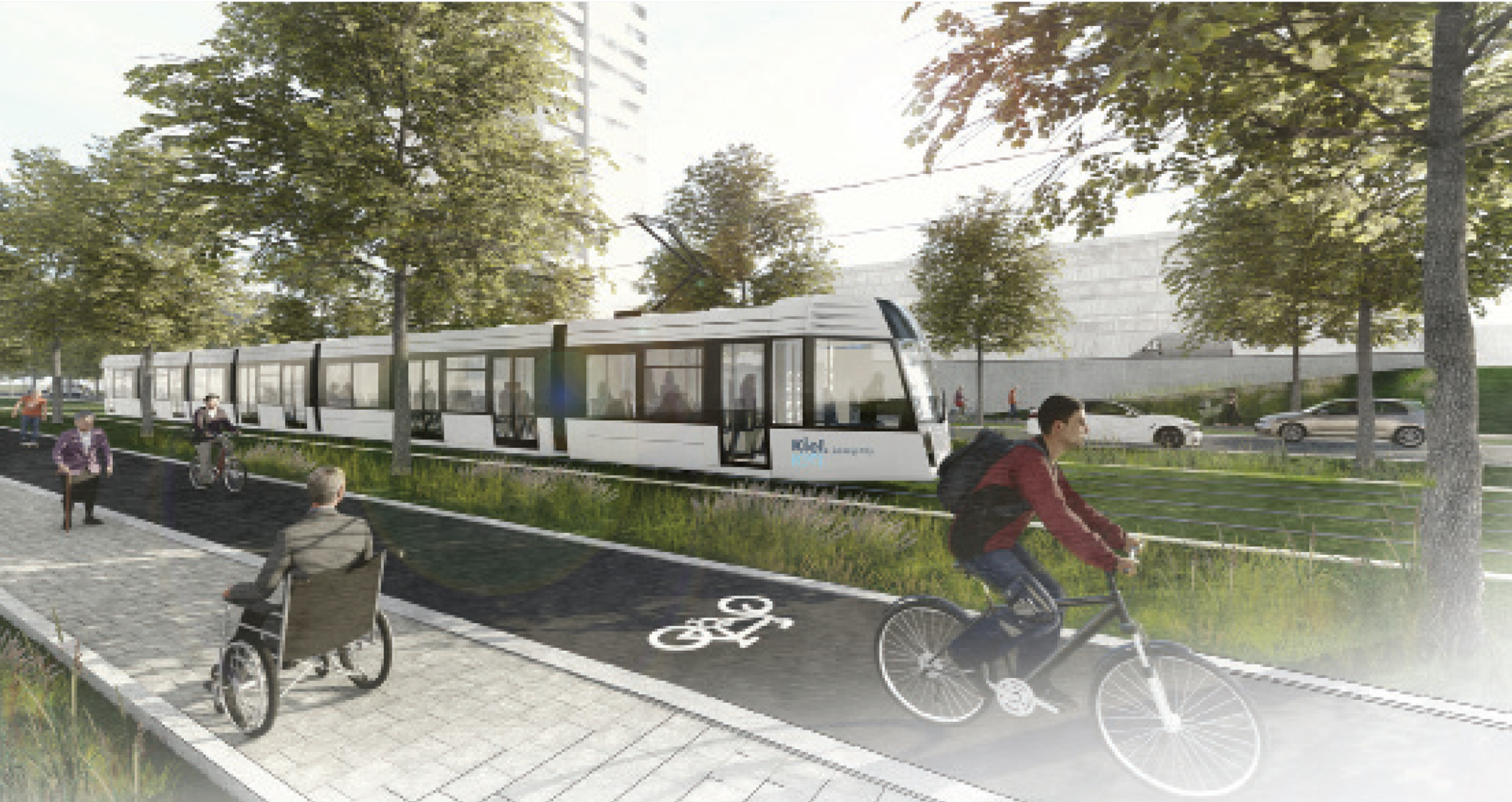 The capital of the German state of Schleswig-Holstein, Kiel, has set the goal of significantly reducing pollutant emissions by 2035. A key contributor to achieving this ambition will be increasing public transport use, although bus services are already at capacity and any expansion would pose significant challenges.

For these reasons, Kiel City Council has studied the installation of a new public transport system on segregated track, and has already begun the design processes to enable this transition. Both tram and Bus Rapid Transit solutions will be assessed, with the city aiming to decide upon which option it is to pursue at the end of 2022.

Rail-borne transport has characterised the cityscape over many decades. Kiel’s first horse tramlines, built to the unusual 1100mm-gauge, were established in 1881; five years later these three routes were electrified as the system quickly grew to eight lines.

During World War Two, the tramway was badly damaged along with the rest of the city.
Reconstruction lasted until the early 1950s and the tram continued as the primary mode of public transport until the mid-1960s. Closures began in 1967, with line 3 being the first to cease service. More lines transitioned to bus operation until, on 2 May 1985, the final tram passengers were carried on line 4 around ‘the Hörn’ from Kiel-Wik to Kiel-Wellingdorf.

Fast forward two decades and discussions began on a plan to improve public transport by way of a dual-system light rail network. The proposed Stadtregionalbahn (SRB) concept was based on the example of Karlsruhe and would have resulted in improved connectivity between Kiel and the surrounding region. When the Rendsburg-Eckernförde district council rejected this project in December 2014 it was back to the study stage.

In January 2016 the city council approved a decision to develop a new segregated transport system, focusing on a series of either tram or inner-city BRT routes.

The baseline study Mobility concept for sustainable local and regional public transport in Kiel was completed in 2019. This evaluated whether there would be sufficient demand for a high-quality public transport system in the city and if other modes (e.g. bicycle traffic) could be strengthened by supporting measures.

The following corridors were identified as showing sufficient potential and will now be analysed in detail:

Improving transport provision is also an essential part of the city’s high-level climate goals, defined in the Master Plan 100% Climate Protection. For the mobility sector, energy consumption is to be reduced by 35% by 2035 (compared with 1990 levels), and 63% by 2050. Installation of a sustainable, segregated public transport system was highlighted as part of measures to achieve these objectives. Further goals are set out in Kiel’s Mobility Master Plan and those of the neighbouring districts, the so-called KielRegion.

These considerations result in a clearly-defined schedule; the project will only be able to make the necessary contribution to climate protection if it can be put into operation in the foreseeable future. No specific date has yet been set for the start of operations, but it is envisaged that a little over ten years will be needed for the planning, approval, construction and organisational structure. 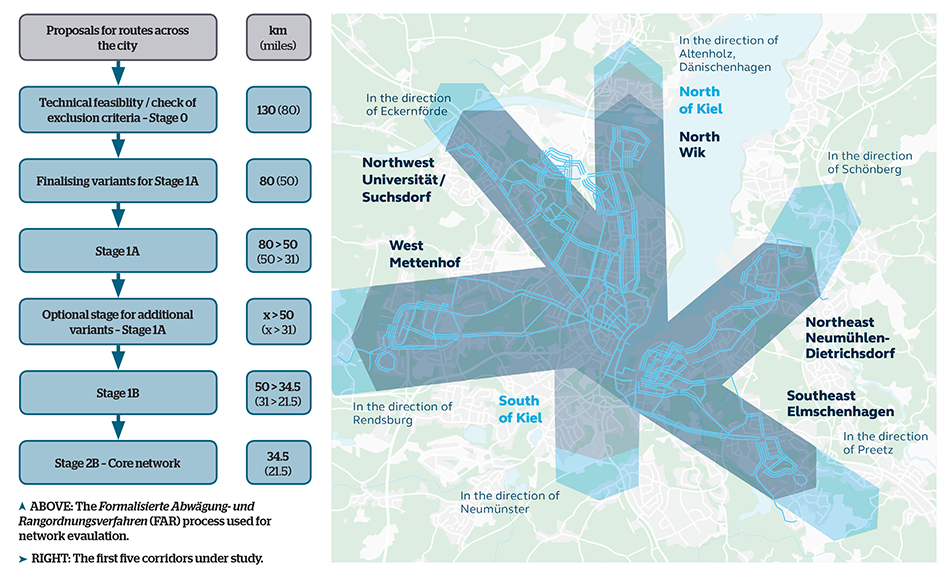 Decisions on mode, identification of routes with the best cost-benefit ratio, consultation and involvement of political representatives began in mid-October 2020 and will take place until the end of 2022.

According to the current schedule, Stage 1B (see page 310) will deliver the results for a
core network by the end of June 2022. The following six months will be dedicated to collection of finance and public funding, as well as all the information required by decision-making bodies. An implementation timeline is also being developed; this will determine a commissioning date for a first stage of the chosen solution.

The public is being asked to participate in the process from the start, because the schedule can only be kept if the project meets broad approval. Organisational forms are also to be determined from the beginning: the current structure of the city administration – in which the dedicated mobility department takes on project management – is being evaluated for adjustments to ensure the project is implemented on time, on budget and to the highest possible quality.

The overall schedule is arranged in stages, released by corresponding resolutions in Kiel.

Examples from other cities show that major projects often fail because of resistance from residents and business; inadequate information and poor communication is often the main reason for a lack of acceptance.

For Kiel therefore, public relations have formed an essential element of the project since the publication of the baseline study in 2019. Using different formats and platforms, the public was informed about the project and people were able to introduce their own suggestions as well as voice concerns.
During district forums in November 2019 and a parallel online participation, more than 2000 comments were received.

A dedicated website (www.kiel.de/mobil) contains an FAQ section, documents, and project information that is continuously updated. Since February 2021 there has also been a blog (kielmobil.blog). 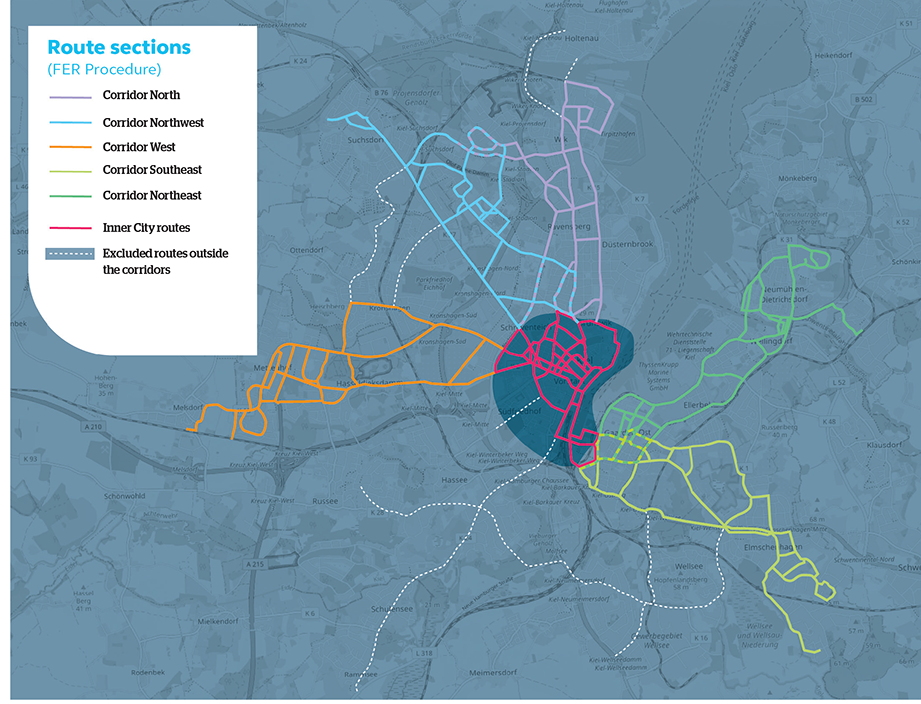 One possible procedure for the evaluation of options in the study is Germany’s established Formalisierte Abwägung- und Rangordnungsverfahren (FAR, or formalised evaluation and ranking procedure in English). This is tailored for the design of new routes in the inner-city and is legally watertight for planning approval processes.

The FAR contains two steps preceded by an initial check of the technical feasibility of track sections and a first pre-selection (Stage 0). Route variants will be built out of that.

The five corridors of the baseline study serve as a foundation. They are:

For the definition of the route sections to be analysed in Stage 0, the whole input (public relations, site visits, baseline study etc) was gathered and edited, resulting in a connected network of lines with a total length of about 130km (80 miles).

Based upon the above network, route sections were determined and separated into track sections between intersections. Before the actual analysis of individual sections could begin, each was checked for correspondence to the criteria and project planning goals. During the procedure, the following exclusion criteria were used:

•  Locations outside the chosen corridors

•  Locations outside the city of Kiel

•  Negative impact on the environment

Route sections were additionally checked for their technical feasibility. Reasons for exclusion are:

• Bridges, ramps and tunnels within the city which aren’t suitable for urban integration or would block traffic routes or housing/building development.

From the remaining sections, pairs were built for comparison. The goal of Stage 0 is a trade-off between neighbouring route sections. With the help of these comparisons, mutually-exclusive sections within one corridor were evaluated to identify which were the most advantageous. The criteria used for this step regard the demands of:

• The transport operator (economic efficiency, quality of the route, flexibility)

• The municipality for the use of funds and the goals of its transport policy (investments, enhancements of bicycle routes etc, conflicts)

Using these route sections, continuous variants were ‘built’ within every corridor.
As a result, the network was shortened to around 72km (45 miles).

For further consolidation in Stage 1A, these variants were then analysed. A variant is defined as a continuous line starting from the main station in Kiel to the edge of the corridor. As a result of Stage 0, there are 26 variants for consideration in Stage 1A (between two and seven variants per corridor).

Stage 1A includes a rough evaluation of all variants to further reduce the alternatives for study. The criteria were detailed further and resulted in a set of 15 variants in total, with an overall length of around 51km (32 miles). 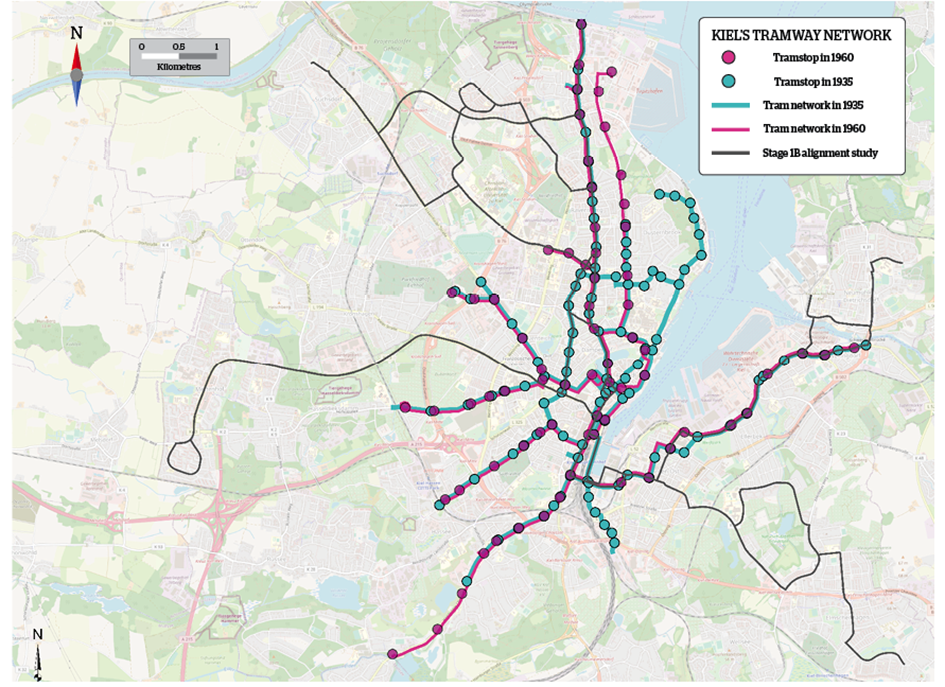 An interdisciplinary approach – considering the vehicle, infrastructure, depot and operation as one system – was important for development of the planning parameters. The high-quality public transport system is defined above, with the main parameters supporting the primary objectives of the alignment study:

• They lead to a high-quality public transport system

• They support economic efficiency and a positive cost-benefit ratio

• They are open to new technologies for both systems – i.e. alternative drive systems

• They make a future tram-train or regional BRT network possible in principle, including inner-city extensions

• They allow creative leeway while at the same time respecting economic efficiency.

• Green tracks as a leading principle for tram superstructure as well as a high proportion of segregated way; dedicated BRT lanes

All other necessary planning parameters will be updated by the end of 2022.

Infrastructure planning began in May 2021 for a network of around 50km/30 miles
(Stage 1B) to prove the feasibility of a technical solution; this can be further elaborated upon during subsequent planning.

Exclusion criteria (width of road space, access routes, cadastral boundaries,
non-resolvable conflicts of use and so on) and relevant cost factors (e.g. existing utilities pipes and wiring ducts, buildings) must be included at an early stage.

Affected structures will be evaluated with regard to the loads incurred by tram/BRT and, if necessary, costs for their adaptation will be included. For new structures, rough sketches are compiled. Design concepts for coherent streets will be created by landscape architects, taking into account visual aspects from urban and landscape planning, such as the design of the track structure, the possibility of enhancements such as tree planting and integration of the new route into the urban environment.

Operational planning is carried out for the entire network using the dynamic simulation software Open Track.

The next 18 months will be characterised by further work on refining the design and requirements for a new segregated public transport system in Kiel. Regular consultation and discussion with local politicians will take place to allow easy realisation of the project with the necessary political backing.

The basic technical and traffic-related parameters must be examined in more detail with regard to urban planning issues and a further approximately 15km (nine miles) of the suggested network must be separated and cut out. This process of separating viable sections, as well as representing and including stakeholders in the process, will play an essential role on the journey to the successful implementation of the chosen solution.

All images courtesy of Kiel City Council and Ramboll Rail. Grateful thanks are extended to the project team for their assistance with this article.