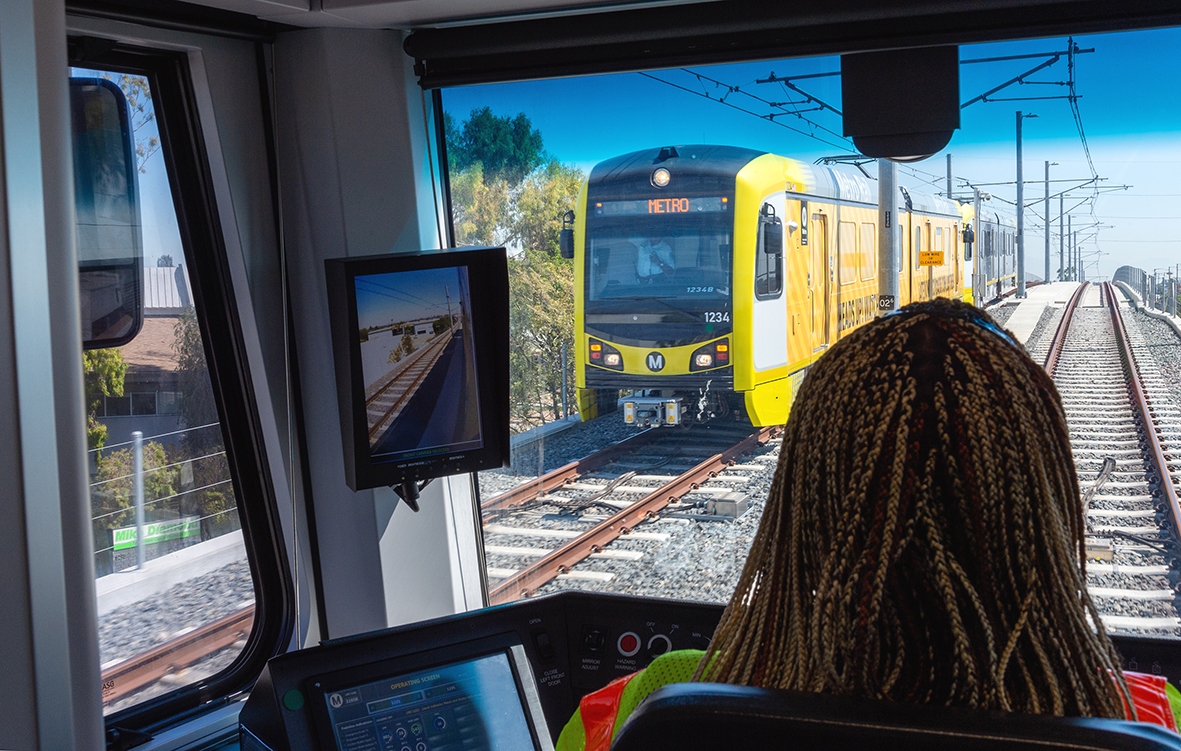 A driver’s-eye view onboard a Kinkisharyo P3010 LRV on the new K line. LA Metro

Los Angeles’ 13.6km (8.5-mile) light rail K line (previously known as the Crenshaw/LAX project) opened on 7 October, followed by a weekend of free rides on the whole Metro network. Normal service began on 10 October, with peak services every ten minutes (12 minutes off-peak/weekends, and every 20 minutes in the early mornings and after 20.00).

Currently serving seven new stops on the Crenshaw – LAX corridor, the K has a temporary terminus at Westchester/Veterans; interchange with line E is at Expo/Crenshaw. A southern extension to Aviation/Century is expected to open in late 2023 and LAX/Metro Center (connecting with an automated peoplemover to the terminals) in late 2024; that will bring a further 3.2km (two-mile) expansion of the system.

North of Expo/Crenshaw the longer-term aim is for an extension to West Hollywood.

The Crenshaw corridor has been without a rail link since the Los Angeles Railway trams disappeared in 1950. Construction of what is now the K (Pink) line began in January 2014, with passenger service originally to begin during October 2019. Challenges with bridge and tunnel construction and the pandemic have caused the subsequent delays.

The USD2.2bn project was supported by USD778.9m in federal funding, while the State of California contributed USD180.5m. The remaining finance came from Measure R and Proposition A and C sales tax revenue and local agency funds.

“The K line is integral to Los Angeles’ transportation future,” said Mayor Eric Garcetti at the opening. “It will open doors of opportunity for riders across our region and help make Los Angeles a more accessible, sustainable, and inclusive city.”