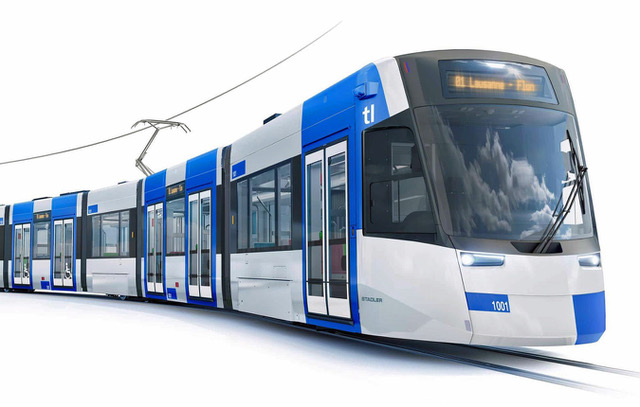 Switzerland’s Lausanne has contracted Stadler to supply ten Tramlink 45m standard-gauge low-floor cars (with an option for two more) for the new Lausanne – Renens line. It follows the granting of preferred bidder status.

With a passenger capacity of 316, the new vehicles for Transports publics de la région lausannoise(TL) will be to the same design as those supplied to Lugano and ordered for Basel. Delivery is required before the end of 2025 and the contract value is around CHF50m (EUR51m).

The 4.6km (2.9 miles) from Lausanne-Flon to Renens Gare Nord is due to open in 2026 and will become line T1; there will be a connection at both ends with existing light rail line M1. Although approved in 2016, the construction permit for the CHF500m project was not issued until 2020. Work started in 2021.

A second phase is also planned,for an extension from Renens to Villars-Ste-Croix, Croix-du-Péage (3.1km/1.9 miles).

Lausanne has a mixture of passenger transport including an automated rubber-tyred metro (M2). This took over the alignment of the rack railway linking the lakeside with the city centre in 2008 and goes on to serve the northern suburbs (5.9km/3.7 miles). M1 is a light rail line connecting Flon in the city centre with the south side of Renens Gare via the University (7.8km/4.8 miles), and there are trolleybuses on urban routes. The metre-gauge Lausanne –Echallens–Bercher light railway runs from Flon in subway to Union-Prilley and on to Bercher (24km/15 miles).