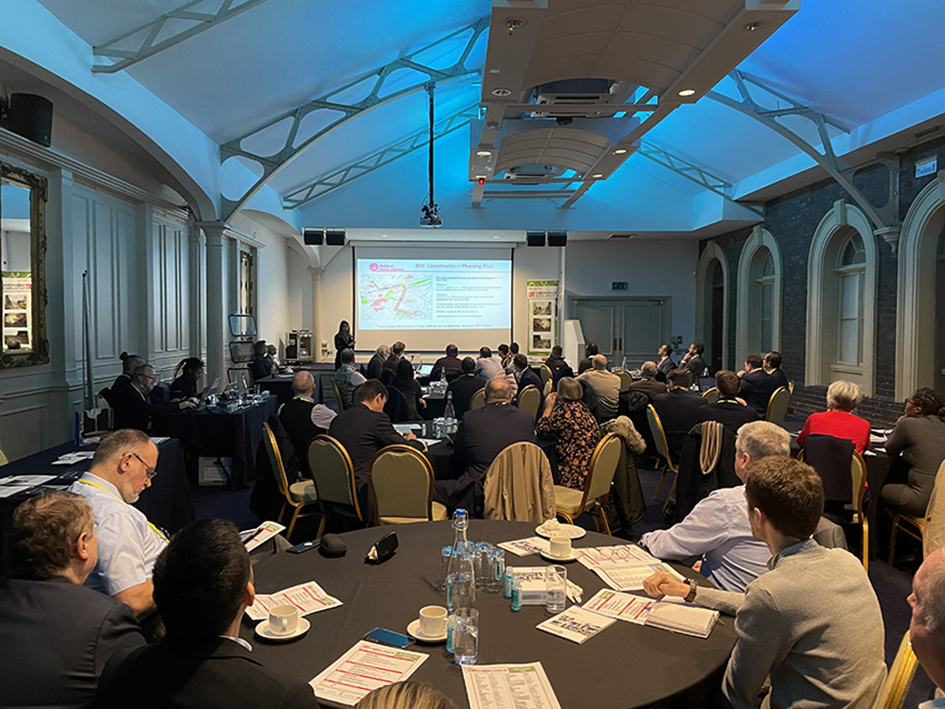 Wolverhampton’s Grand Station hosted the first Mainspring LRT Excellence Day of 2022 on 10 February. Focused on infrastructure maintenance and renewals, the day welcomed participants from across the UK and Europe for a schedule of presentations and debate which showcased award-winning innovation, case studies of recent projects, and demonstrations of game-changing technologies.

Marta Gasch Bielsa, Project Manager for the Midland Metro Alliance, began with an overview of Birmingham’s new Eastside Metro extension. Ms Gasch offered an insight into this high-profile programme to extend the West Midlands Metro by 1.7km (1.05 miles) from Bull Street to Digbeth in 2024, exploring the issues associated with the creation of a new city centre ‘delta junction’. Some, she explained, were common with projects around the world: a congested urban environment, unforeseen utility diversions and material and supply delays. Others were the inevitable additional headaches associated with delivering major works during COVID.

Of interest to many was her description of the novel pre-cast concrete track system which was assembled off-site to enable a remarkably quick installation – saving disruption and cost in the process.

Project managers from Nottingham Trams delivered a similarly fascinating talk on another necessary issue for any established tramway: renewals. With many of the UK’s second-generation systems now approaching the age where key assets are life-expired, Marek Szwej and Will Hughes detailed the planning behind the 2021 track relaying project in the city’s busy Lace Market. This busy centre-point of the system features a tight curve and complex gradients, with the works also effectively cutting the network in half, necessitating stabling of the fleet out on the system overnight for extended periods. Delivered in record time with the support of proven and trusted contractors, the pair explained, this intricate scheme had the added complexity of an accelerated schedule at the request of the city.

As well as current works, other lectures explored some of the exciting innovations aimed at reducing the cost of new schemes. Dr Christopher Micallef from the University of Warwick outlined the technical detail of the novel trackform for the UK’s groundbreaking Very Light Rail initiative. Aiming at an outturn cost of just GBP10/km for a turnkey system of vehicles and infrastrcuture, advanced materials and a clever design should allow installation of the novel 300mm slab track, negating the need for much of the time- consuming and costly utilities diversion process.

Pablo Oromí, Project Manager for Metrotenerife, travelled to the UK to outline another award-winning initiative  – a removable track insulation chamber created in-house. Not only speeding up the activity of track renewals by removing a lot of the unnecessary waste associated with breaking out the surrounding road surface, this patented method has now been in service for five years. Demonstrating a remarkable 40% cost saving over traditional methods, the system is compatible with all major rail and fastening systems and is easy to incorporate into a variety of surface coverings, making it a win-win.

Thomas Lorent, General Manager of Sustainable Resilient Systems for Pandrol, similarly focused on sustainability with his arguments for the use of recycled materials in LRT track construction. Such low CO2 methods can not only further enhance rail’s reputation as a natural ‘champion’, he contended, but also address the indirect emissions involved in manufacturing. Furthermore, new and improved materials can offer improved noise and vibration protection for city centres – another ever-present and thorny issue when managing sensitive stakeholder relationships.

Leading to an engaged debate on materials technology, Mr Lorent went on to dispel many of the myths surrounding the use of eco-friendly materials, demonstrating samples of Pandrol’s latest products for delegates to see for themselves.

Of course sustainability needs to begin much earlier, as described by Andy Willetts of Bentley Systems in a wide-ranging discussion on the role of modern digital solutions. Leading to greater harmony between multi-disciplinary teams, often based in different countries, having a common platform can significantly save the cost of re-work or duplication before a spade gets anywhere near entering the ground. Showcasing the concept of ‘digital twins’, Mr Willetts explained how every piece of infrastructure can now be built in the virtual world. Such detailed modelling has further advantages for operational and asset management teams in giving a far more complete view of a network’s multi-generational lifecycle.

Naturally, safety was also a hot topic for discussion. Neil Bradbury from Schweizer Electronic led the way with case studies on new crossing technology being developed for the UK’s mainline network. Such systems for managing the interface between rail, road and pedestrians, he explained, are being used on metro and tram networks in Europe and use proven ‘commercial off-the-shelf’ (COTS) components for robust and reliable performance. These offer significant cost savings over bespoke parts, with Mr Bradbury citing one example of a customer who bought a few hundred pounds’ worth of spares years before which are still ‘gathering dust’ as they are never used!

Further exploring the interface between urban rail and the public, Robert Woerfel from Sealable opened the afternoon session by describing a new product being used on Basel’s tramway to minimise the risk to cyclists and other wheeled road users when crossing grooved tracks – a serious issue familiar to many LRT operators. The collapsible (and recycled) rubber ‘Velogleis’ infill has all-but removed the problem of wheels getting stuck in tram tracks, he explained, and his demonstration drew significant interest from the audience of designers, engineers and infrastructure managers.

To round off the day, Alphatek’s Andy Clarke offered a case study on how a patented new coating is dramatically increasing the life of switch blades. Currently employed on Network Rail infrastructure, the same coatings can be used on any rail system, he said, with data showing a significant increase in the time required between inspections and renewals of key components. The effects on both track safety and whole-life costs can be dramatic, he argued.

As well as the presentations and interactive sessions, Mainspring’s LRT Excellence Days allow delegates to make the most of the networking between those with day-to-day responsibility for the maintenance and operations of networks with the supply chain that feeds them.

There is so much innovation in the world of LRT infrastructure – and this first event of 2022 has certainly helped to kick off these conversations and open a few eyes to the possibilites, hopefully taking theory out into practice.