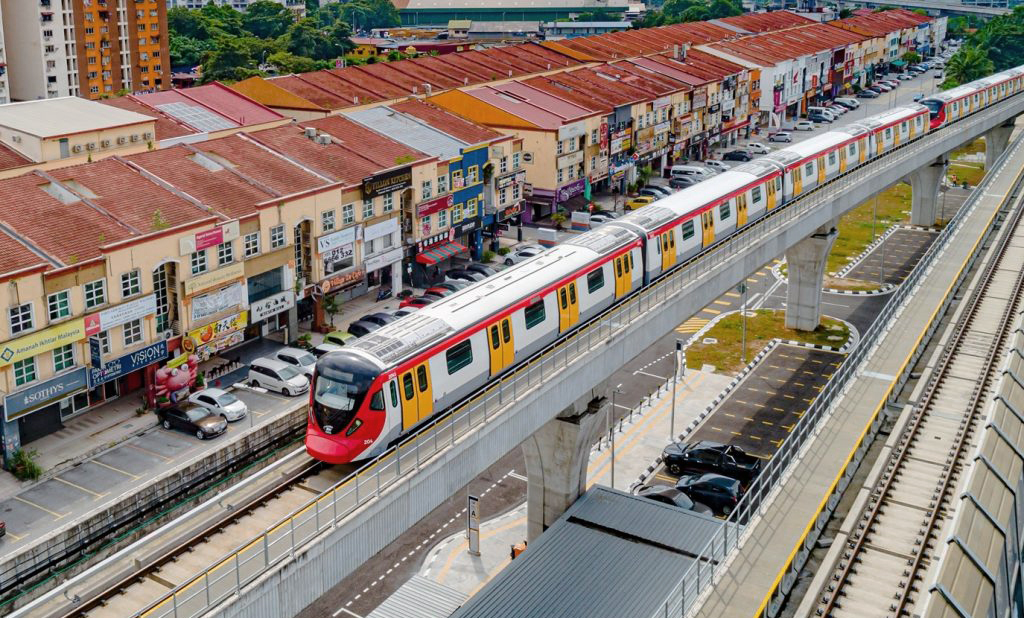 Passenger service on the Putrajaya line was inaugurated on 16 June. Image courtesy of MRT Corp.

Opening of the first phase of Malaysia’s Putrajaya (MRT-2) line was undertaken by Prime Minster Ismail Sabri Yaakob together with his finance and transport ministers on 16 June. The 17.5km (10.9-mile) section runs from Kwasa Damansara to Kampung Batu with nine new stations, plus three that were formerly part of the MRT Kajang line and closed in October 2021 to enable their reconfiguration.

To celebrate the new line’s opening, Prime Minister Ismail Sabri announced a month of free travel on all bus and rail services operated by RapidKL.

The line is operated by 20 Hyundai Rotem fully-automated four-car trains, capable of 100kmh/h (62mph) operation. Each 77.4m train, powered by 750V dc third-rail, has capacity for up to 1200 passengers. During peak hours services run every four minutes.

Passengers can transfer cross-platform between the MRT Putrajaya line and MRT Kajang line at Kwasa Damansara; the new route is also connected with KTM train services at Sungai Buloh, Sri Damansara Timur (with Kepong Sentral KTM Station), and Kampung Batu. Launch of the service has coincided with the creation of 13 feeder bus routes.

Previously known as the Sungai Buloh – Serdang – Putrajaya line, this is the second of the three-line Klang Valley Mass Rapid Transit Project to be developed. It will ultimately serve a corridor with a population of around two million, stretching from Kwasa Damansara (a new development in north-west Kuala Lumpur and its southern suburbs), to the federal administrative centre of Putrajaya.

The alignment will total 57.7km (35.9 miles), consisting of 44.2km (27.5 miles) of elevated tracks and 13.5km (8.4 miles) of underground running. It will have 36 stations (27 elevated and nine underground), with ten of them offering interchange with other routes and 16 having park-and-ride facilities. A further four future stations have been provided for.

Final approval for the Putrajaya line came in 2015.Phase Two operation is expected to begin in January 2023, allowing trains to travel over the whole line from Kwasa Damansara to Putrajaya Sentral. Total construction costs are expected to be RM30.5bn (EUR6.6bn).