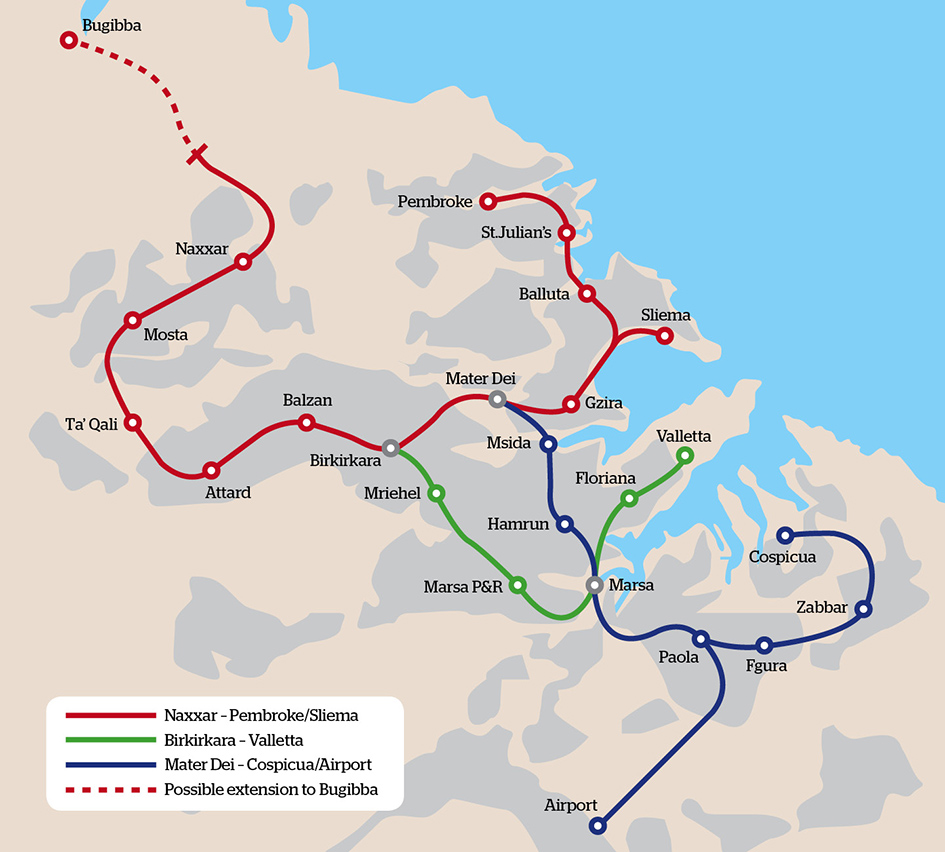 A feasibility study for a 35.5km (22-mile) light metro has been published by Transport Malta. Compiled by Arup, the report analyses underground and elevated light metro options, plus BRT and surface tram alternatives, to deliver a new rapid transit system for the EU’s smallest nation (2021 population, 443 000).

Focusing on an automated light metro as the preferred alternative due to its ability to better penetrate the island’s key urban centres, three routes are outlined: Green: Valetta – Birkirkata; Blue: Cospicua – Mater Dei, with a south-westerly branch to the airport in Guja), and Red: Pembroke – Naxxar, with an eastern branch to Sliema. The possibility of a future northern extension to Bugibba is also highlighted.

The report identifies the potential reuse of excavated material from tunnelling as part of land reclamation projects. Earlier metro proposals recommended a similar approach, complementing plans for an offshore wind and/or solar farm and using the renewable energy created to power the network.

Estimated at EUR6.2bn, including a substantial contingency, the system would feature 24 stations strategically located for optimal integration of walking and cycling routes and the implementation of shuttle bus services to towns not within a direct catchment area of the metro.

The study proposes three-phase construction, beginning with the Red line from Nexxar to Pembroke/Sliema, alongside a spur to the capital, Valetta, which would take in part of the Blue and Green lines. A second phase would focus on completing the route to the South Harbour district and a branch to Malta International Airport at Gudja. A third phase would complete the central loop, also adding operational flexibility.

With an expected frequency of 7-8 trains per hour, and a capacity of 300 passengers per train, the proposal suggests that once complete, 29% of all journeys on the island would be made via the metro. If achieved, this would save an estimated 25 000 tonnes of CO2 and place around 184 000 people (over 40% of the population) within 15 minutes’ walk of a metro station.

The majority of journeys on the island are currently made by private car, with public transport’s modal share being less than 16%.

While the report has been welcomed by many observers, some criticism has been drawn for the lack of inclusion of a northern route to Gozo (home to around 8.5% of the Maltese population), currently reachable only by ferry.