Mapping the route to success 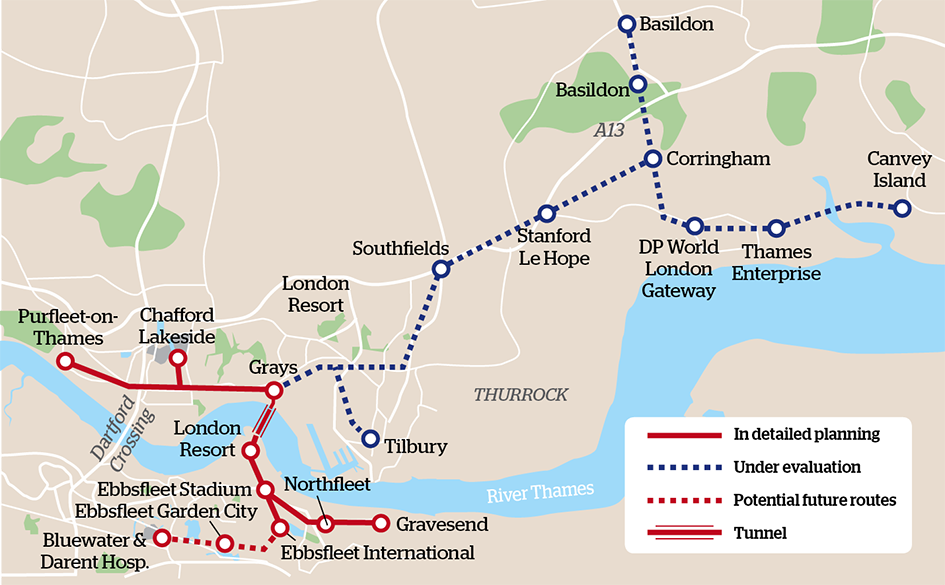 The KenEx light rail proposals would cut congestion around the Dartford Crossing motorway bridge and tunnels further west, an area affected by some of the UK’s highest levels of pollution. The starter line is seen as a potential launchpad for a much wider interurban network.

Turning a new light rail project from simply a ‘good idea’ into a viable scheme is far from an easy task, with a number of important study, planning, consultation and legal phases to be considered for any potential promoter. This process can be both complex and time-consuming – which is where the UKTram’s Centre of Excellence can help.

The Centre of Excellence was established in 2012 to offer advice to sponsors of tramways, light or ultra-light rail schemes, and help them negotiate the project’s challenges with expert, informed and impartial advice. As its membership has expanded, it now provides a ‘one-stop shop’ that reflects changes in the way UK schemes are planned and financed.

With more and more UK cities and large towns exploring sustainable transport, and greater calls from industry, light rail is becoming an increasingly popular solution to urban congestion. For this reason, the Centre has now produced a detailed route map and step-by-step guide to building a solid case for any promoter to develop their plans and provide a clear path towards successful operations.

The Centre of Excellence is already offering support for plans in Bath, Hereford and Leicester, with light rail also being considered in Stoke-on-Trent and Bristol, and proposals for a tramway to link Grays in Essex and Ebbsfleet in Kent (see above).

In fact, we’re tracking around 100 different plans across the UK, although of course not all of these may prove viable. The route map will provide a valuable tool in helping sponsors judge the suitability of their plans and taking the next steps towards realising their ambitions.

Any urban transit scheme must start with a careful consideration of transport need, demand, and a structured methodology to the analysis of key objectives. The route map advocates a phased approach to this process, gaining more detail as proposals develop.

For example, the argument for transport need and future demand usually emerges from increasing congestion on an existing route or within an urban area. Changes or limitations may have also occurred within an area, such as parking restrictions or ‘clean air zones’. Additionally, demand can be predicted for travel to and from new residential or business developments, or expansion or changes to existing locations. These are all valuable indicators when calculating future travel requirements.

With all such urban development proposals, a detailed transport study should be undertaken to demonstrate whether existing transport links are adequate, and which mode would be most suitable to remedy any deficiencies.

Engagement with core stakeholders is critical in these early stages of concept development and initial studies.

Developed by experts from across the sector, the route map offers more detail on these key considerations before moving on to advice when developing a formal business case, supported by more extensive studies to confirm the transport case, route feasibilities, scoping the environmental factors and refining the costs and benefits.

It also includes information on legislation related to the process required ahead of any formal planning proposal. Of particular importance are the Transport and Works Act (TWA) Orders required to secure the ‘powers’ needed to build, operate and maintain a tramway. These are covered, considering their scope and the key clauses contained within the Orders and their implications. Not all will be relevant to each scheme, but it’s important to know which will be needed for any programme to avoid unnecessary complications and delays.

Close examination must also be paid to other factors within the construction, such as compulsory purchase orders, relocation of utilities and road closures – these should all be planned carefully with the utility companies and the highways authority.

Of course, no two schemes are the same. Some may incorporate existing rail infrastructure or closed lines, which requires the integration of railway regulations, while others envisage schemes built from scratch.

Once a scheme is nearing completion, there are still a number of obstacles to successful operations, and the route map ends with a reminder for operators that they must comply with the ROGS (Railways and Other Guided Systems) and other safety regulations.

At the same time, to reflect the evolving nature of legislation the route map is not ‘set in stone’, but rather provides a framework that can develop over time to complement the ongoing work of the Centre of Excellence in supporting sponsors, including local authorities and regional administrations.

By helping sponsors present the strongest possible business case, we can aid efforts to access sources of finance, whether from Local Enterprise Partnerships or from Government funding for regional development or meeting environmental targets.

From the point where a light rail project is proposed, through to the launch of services, the Centre of Excellence is able to provide support based on the experience of those who have helped to deliver many successful schemes in UK cities over the past two decades.