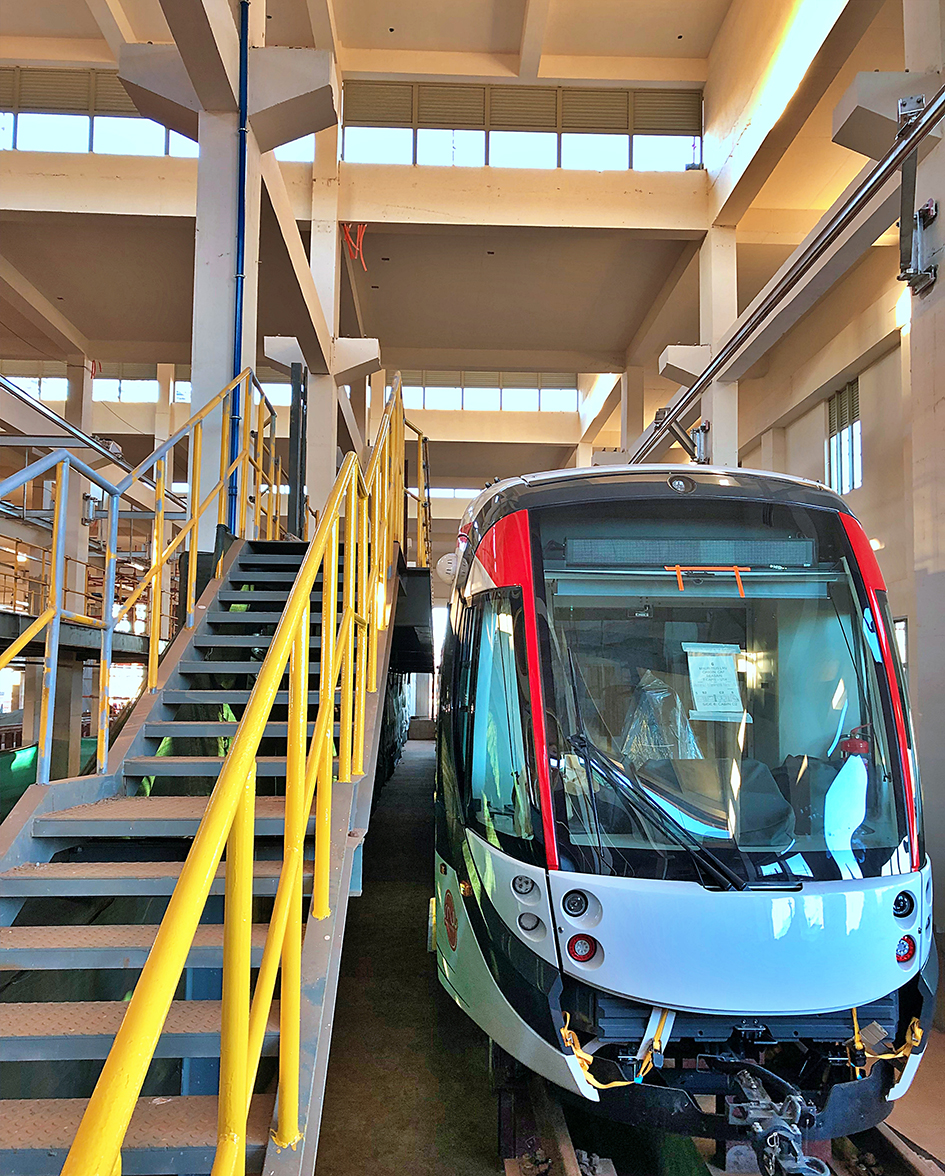 With the contact line retracted and the pantograph lowered, depot staff members have safe and unobstructed access to the roof of the new CAF Urbos LRVs. Image courtesy of Furrer+Frey

As rail operators and maintainers work with both high voltage systems and powerful machinery daily, depots need reliable systems in order to access and maintain vehicles in a safe environment.

As trams and trains have evolved over time they increasingly feature more roof-mounted equipment, such as complex electronics and HVAC systems. This necessitates better access to vehicles’ roofs and also the need for gantry cranes to move items such as heavy air-conditioning equipment and pantographs.

With electrified networks there is also a desire to have fully-electric depots, rather than using diesel shunters to move vehicles around. Combining electric depots with overhead lines – while at the same time ensuring that these environments are safe and allow for gantry cranes etc – is therefore a complex engineering requirement.

Furrer+Frey has been creating innovative overhead line solutions for almost 100 years, constantly striving to stay at the forefront of technology to minimise risk and maximise efficiency. Applying its expertise to the complex challenges associated with modern rail depots, the company has developed the Moveable Overhead Conductor-rail System (MOCS).

With MOCS the overhead line electrification is a bar that can be retracted, switched off and earthed – enabling obstruction-free and safe access to a rail vehicle’s roof. An integrated control system provides a safe and efficient way of controlling depot movements.

A train, tram or LRV drives into a depot under electric traction, and is then stabled by means of a control system which cuts the power using a switch. A voltage transformer carries out a check resulting in a ‘Safe’ indication. As the system is equipped with a moveable conductor rail, the rail is then moved by the control system to its parked position using motorised cantilevers and is safely earthed. Visual and acoustic signals provide advance warning of moving and switching procedures and the status change is indicated by a signal to lower the pantograph and by a running light along the whole system.

The system also includes one or more key switches from the interface to the electro-mechanical interlocking system, through which other equipment, such as cranes, are secured.

Signalling devices can be integrated into the system, such as running lights or signals, that indicate the status of the contact line. An important emergency stop function is included and the control system includes the functionality to indicate emergency shutdown or a malfunction.

The 26km (16-mile) Light Rail Transit project for the island of Mauritius was described as “a game-changer” by Honourable Prime Minister Pravind Jugnauth at the official launch in 2017.

With the first section due to open officially in November (see News), the line is expected to dramatically reduce traffic congestion on the island and, once fully open, cut the journey time from Curepipe to Port Louis to 41 minutes. The project has created approximately 7000 jobs during the construction phase and is expected to boost further economic growth in Mauritius.

Furrer+Frey has always taken pride in its partnerships with multi-modal urban transit schemes, and the Mauritius LRT project will connect three major bus interchanges to give commuters more effective, efficient and sustainable travel options for their journeys.

Delivered by Metro Express Limited (MEL), this Mauritian Government company is responsible for development, finance, construction, operations and management of the system. In 2017, MEL awarded the turnkey project to Indian construction conglomerate Larsen & Toubro (L&T), with a target of commissioning the first 13km (eight-mile) phase between Roes-Hill and Port Louis within two years.

Furrer+Frey has a long-standing relationship with L&T, working with the company since 2007 on major mass rapid transit projects across the Indian sub-continent, including metro systems in Delhi, Lucknow and Dhaka.

For Mauritius, the MOCS system was chosen to support the safe and efficient maintenance of 18 CAF Urbos low-floor LRVs on five maintenance tracks at a new purpose-built depot in Richelieu, located at the northern end of the new line.

L&T had appointed SYSTRA as the Detailed Design Consultant, with RITES – a Government of India Enterprise, established in 1974 under the aegis of Indian Railways – appointed as the project consultant by MEL.

In conventional depots, inspection and maintenance tracks often require diesel or battery-operated locomotives. These involve significant amounts of time and logistical management to haul vehicles into the depot or an electrified movement within the depot itself – where the overhead system can cause obstruction for staff accessing the train roof.

This process has similar safety hazards as a conventional electrified track. Furrer+Frey’s MOCS eliminates such issues with a robust, rapid, retractable and elegant, safe system.

MOCS was therefore a natural choice as it is both versatile and flexible. For example, it can be used in multiple arrangements to suit a variety of requirements – the sideways-folding conductor-rail is most common and can be used in liftable and retractable arrangements.

For the Richelieu LRT depot, a sideways-folding cantilever has been used and the transition from conventional overhead line outside the depot is done through a transition bar and an in-line horn. As the system operates on dc voltage, all cantilevers are equipped with double insulation for stray current mitigation.

The collective focus between the project partners has been on producing an efficient, safe and quality product for the depot whilst also keeping sight of the September 2019 target date for commissioning. It was important to maintain an early and continuous engagement with key stakeholders such as the civil construction and rolling stock teams to ensure delivery of
a fully integrated system without any rework.

This approach was an integral part of the project and has contributed to its success. There was no scope for error as this could affect other critical systems and cause project delays. Furrer+Frey’s on-site team worked with L&T to commission the system in time and ahead of the LRV trials.

This project is a great example of MOCS seamlessly integrating with the depot facilities, in particular the interlocking with equipment like OHL power switch, crane access and platform access. The operating process keeps depot operating and isolation procedures simple yet safe.

The first Metro Express LRV successfully ran from the depot in Richelieu to Victoria Station in Port Louis on Sunday 29 September, thus achieving the Phase 1 target – a testament to the work by the whole project team.