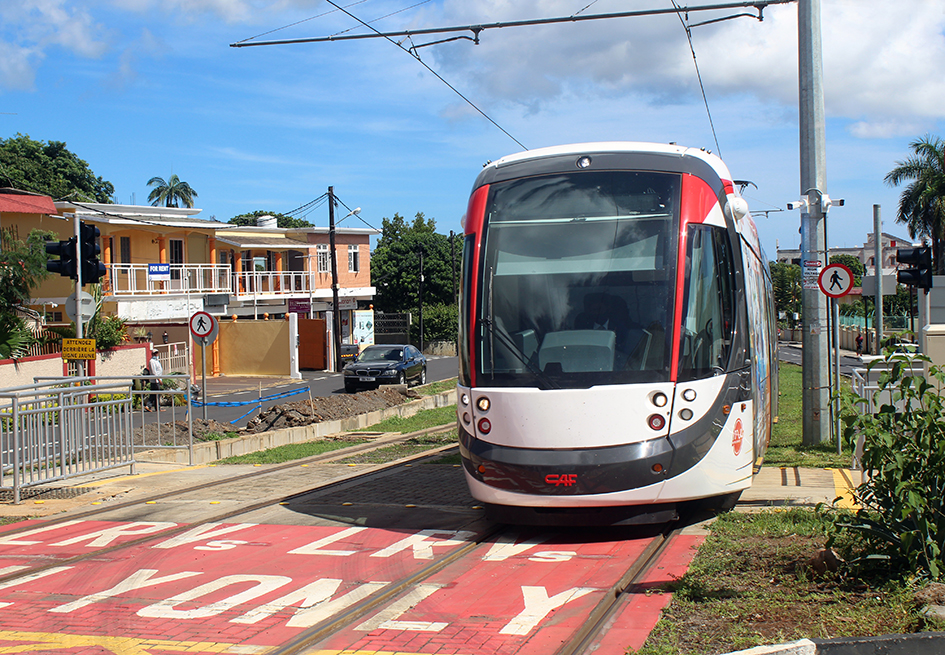 A ‘metro’ system was planned to run through the most densely-populated areas from Port Louis to Curepipe on a north-south alignment. Half the cost of construction was provided by the Indian Government and the entire workforce, employed by Indian contractor Larsen & Toubro, are Indian nationals speaking Hindi. Researching information on the project is therefore challenging as only a few of the project’s engineers speak English or French.

The first 13km (eight-mile) section between Rose Hill and Port Louis Victoria opened on 22 December 2019 with a simple timetable – departures from each end daily, 06.00-22.00, at 00, 15, 30 and 45 minutes past the hour. The operating day is now 06.00-19.00; this has been reduced reflecting little demonstration of demand after 19.00. To maintain a reliable service, a spare tram is stored on the unused Down platform at Port Louis Victoria.

Branded ‘Metro Express’, this is effectively an interurban light rail service using new infrastructure on a disused rail alignment. Ridership continues to be very high with a 20-21-minute overall journey time – at least half the time of the parallel bus service, and at a similar single fare of MUR30 (EUR0.63). The maximum line speed is 70km/h (43.5mph) and punctuality is excellent.

The global coronavirus pandemic has had no effect on the Metro other than that all passengers are required to wear face coverings. Mauritius is a COVID-free nation, with very few visitors due to quarantine entry regulations, and the inland route from Port Louis is of far more use to locals than tourists.

The fleet of 45.4m-long, 2.65m-wide seven-section low-floor Urbos 100 sets built by CAF in Spain (numbered 101-118), have been delivered. All 18 are based at Richelieu Depot between Barkly and Coromandel stops. An interesting feature of the destination displays are the inclusion of the railway terms Up and Down, i.e. Rose Hill Central (Downtrack). However, the criteria is the opposite to conventional railways where the Down line is with the ascending mile posts and the Up line with the descending mileposts. 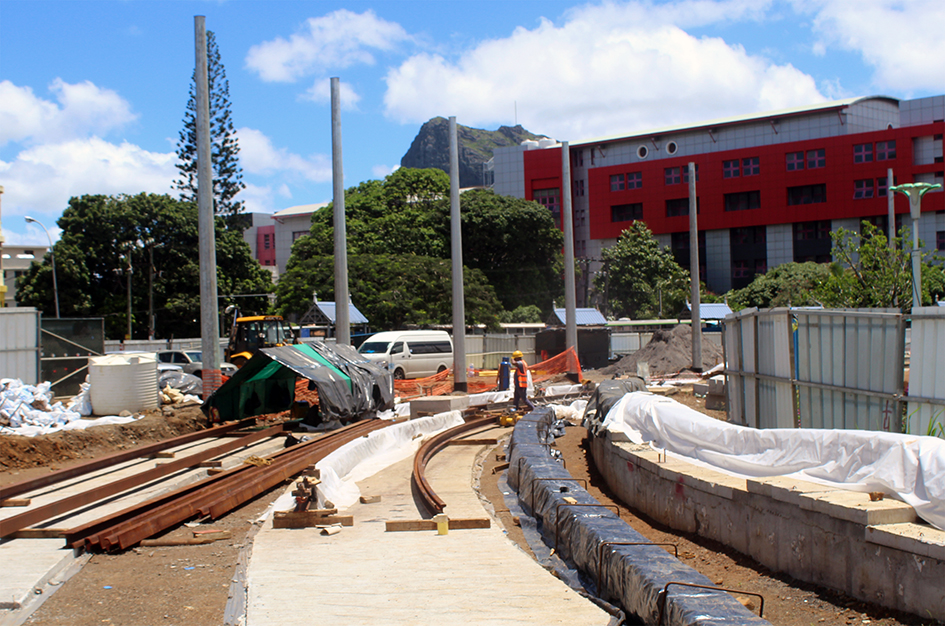 The north end of the future Quatre Bornes Central stop, illustrating the sharp curve being
built to take the route across a level crossing into
the centre of St Jean Road for about a kilometre of street running.

Currently underway is extensive work on Phase 2A, planned to open late 2021/early 2022 between the current Rose Hill terminus and Quatre Bornes. Quatre Bornes Central stop will have two platforms and be co-located with a significant bus interchange. The 3.5km (2.2-mile) extension has one intermediate stop, Belle Rose, and offers a mix of both ballasted and grassed track.

Approaching the traffic-congested town of Rose Hill (291m above sea level, population appoximately 78 000), the track ascends onto the elevated route that continues to join the open section – a total of around 400m. On this section of the route there is a diamond crossover used to turn trams since the opening. There are three mid-section level crossings plus a pedestrian crossing with the standard signalling – the first such installation on the system. These will impact on running times. Incidences of road users passing red traffic signals is common and there were two such fatalities shortly after the system opened. As such, trams now crawl across the nine existing crossings, adding up to two minutes to the original journey time.

The remaining 9km (5.6 miles) of the route, Quatre Bornes Central – Curepipe Central, is in various states of construction, including some sections of virgin ground. The third phase to open will be a further extension from Quatre Bornes Central to Trianon, serving the densely-populated Ebene Cybercity as well as the University of Mauritius.

A contract extension for this short section was awarded to Larsen & Toubro in February 2021 and covers construction of track, viaducts and bridges and three stops, as well as electrification, passenger information and signalling systems.

Quatre Bornes Central stop works on 23 February. Looking towards Curepipe, the alignment of the OLE masts curve sharply as the line emerges onto St Jean Road for around a kilometre of street running.

The route to Curepipe

Curepipe Central terminus, 529m above sea level, will serve this large commercial town of around 78 500 residents on the Central Plateau. The extensive two-platform elevated stop will be eight metres above the former railway yard in a very central location. The structure is at an early stage with extensive scaffolding erected and large diameter concrete columns. Immediately south of the two platforms will be a diamond crossover allowing bi-directional working over the two platform tracks.

The 400m elevated line running down the centre of Jerningham St will descend to a level crossing immediately after a future ground-level stop at Curepipe North. The longest concrete span on the Metro system is 36m and weighs 68.31t. From here the route will continue on  a long continuous 1:25 descent on the old MGR alignment to beyond Vacoas stop, over which steam engine crews toiled with heavy trains, particularly those with sugar cane. There were some cuttings dug to give the even grade, and some sides need stabilising work. As a former railway route, there are many cut-stone walls visible and few level crossings. The steepest gradient on the Metro is 1:20.

The route continues at grade to Trianon and along the section from Phoenix stop (the approximate mid-point of the line between Rose Hill and Curepipe), Metro construction is dwarfed by massive roadworks including long multi-lane roads in an area known for chronic traffic delays.

Leaving Trianon, on a slight hill, by elevated track to St Jean the route makes a 90-degree turn westward which has already been constructed, with OHLE masts erected. This avoids busy traffic underneath before the track descends to St Jean stop to the centre of St Jean Road towards Quatre Bornes Central, about 1km (0.6 miles) distant. This will be the only genuine street-running on the eventual 25.95km (16.2-mile) system.

Approaching Quatre Bornes Central, the track takes a sharp right-hand turn northward from the centre of St Jean Road, the town’s wide main street, and across a level crossing to join the remainder of the route. There will be five fully-signalled level crossings in the St Jean-Quatre Borne Central section alone.

No work has commenced to date on the final section to Aapravasi Ghat, which will be single-track – a continuation of the Up line. A facing crossover has been installed in concrete to facilitate Down trams continuing straight to a one-set capacity siding or crossing to the Aapavasi Ghat line.

Meanwhile, to protect the running lines, there are two buffer stops supplied by Rawie of Osnabrück, Germany, close to the platform ramp. Leaving Port Louis Victoria, a river bridge is required and the narrowing of a bypass road (originally Quay St) for the new 700m route. The original Post Office, a significant colonial building and a national monument, and the detached sorting office, associated with slavery, historically had the MGR track in front and will in future have the Metro instead.

Aapravasi Ghat stop will have a pedestrian overbridge across the bypass into Immigration Bus Station – the country’s largest modal interchange. The projected journey time from Curepipe to Aapravasi Ghat is expected to be 50 minutes, but the level crossings could have a negative impact on these times when the service opens. Few of the high number of tourists to Mauritius, predominantly beach-oriented, will use the system as it does not serve a coastal area.