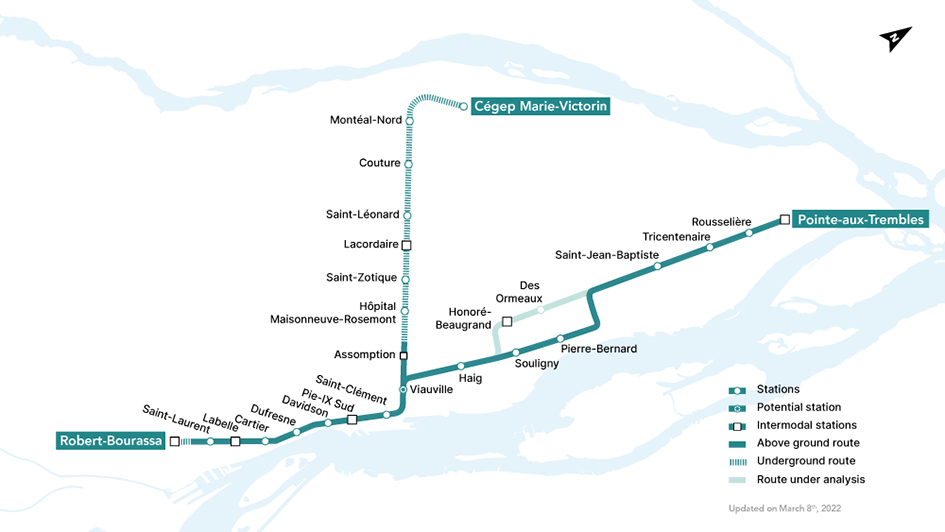 A map of the REM de l’Est route as proposed by CDPQ Infra. Courtesy CDPQ Infra

Montréal Mayor Valerie Plante and Québec Premier Francois Legault announced on 2 May that a revised project, minus the downtown route and with greater integration with the metro, will now be taken forward by the city and province in conjunction with city and regional transport authorities.

The province gave CDPQ Infra, a special infrastructure unit of the pension fund created in July 2015 to develop new-build projects, a mandate for detailed planning of the 32km (20-mile) automated light metro in 2020. Conceived as a link between the eastern and north-eastern areas of Montréal Island and the city’s downtown, the route covers former industrial sites where there is a strong political desire for regeneration.

Opposition to the concept proposed by CDPQ has been widespread. Urban planners and residents challenged that the downtown section would disfigure the landscape, while regional transit authority ARTM (Autorité Régionale de Transport Métropolitain) claimed the system would divert ridership away from existing transit networks.

“We’ve concluded that the section into downtown has to be withdrawn,” said Québec Premier François Legault.

Removing this section changes the financial scope of the project for CDPQ, which was counting on that traffic into the city, he added, explaining that the decision wouldn’t preclude collaboration on other potential transit projects, notably in Longueuil on Montréal’s South Shore.

The CDPQ said in a statement that it plans to seek reimbursement for the ‘detailed technical studies’ it carried out for the project, according to the terms of its agreement.

CPDQ Infra is already working on its first greenfield project, the 67km (42-mile) Réseau Express Métropolitain (REM) which will link downtown, the airport and the Greater Montréal area with 26 stations.

Funded with contributions from the Québec and federal governments, the first section of the REM (the South Shore branch) is scheduled to open later this year.