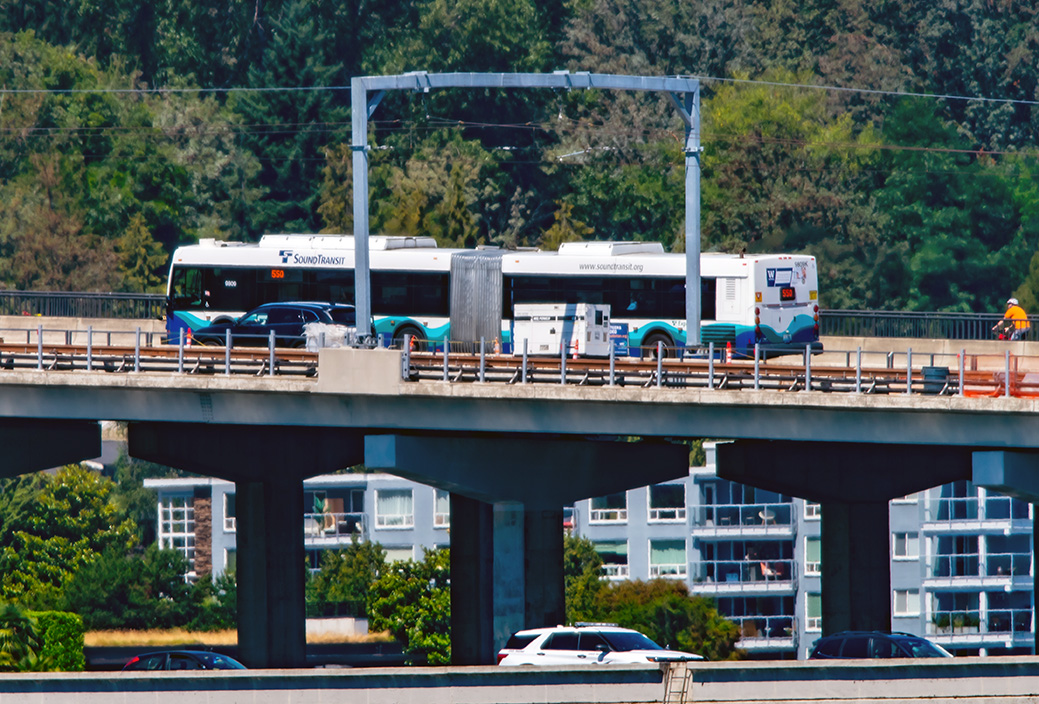 A Sound Transit 550 passes under the new overhead on the I-90 Floating Bridge. Joe A. Kunzler

The biggest issues relate to the USD3.7bn, 22.5km (14-mile) East Link line which will connect International District/Chinatown Station to Bellevue. The planned July 2023 opening is to be delayed by at least 12 months as construction JV Kiewit-Hoffman reinforces or rebuilds 6.5km (four miles) of concrete plinth supports on the new I-90 floating bridge.

Meanwhile, a landslide in July revealed a previously unknown ground instability beneath a section of the USD2.5bn Federal Way Extension in Kent. Around 60m of embankment slid away, requiring a three-day precautionary lane closure on the southbound I-5 highway. A proposed design solution requires the sinking of new foundation columns (of up to 15m) to support the elevated tracks adjacent to I-5 and South 259th Place. This and other related issues could delay opening of the 12.6km (7.8-mile) Angle Lake – Federal Way route from late 2024 ‘until sometime in 2025’.

Sound Transit Deputy CEO Kimberly Farley mainly ascribed delays to thse two projects to last winter’s four-month strike by concrete-truck drivers. Completion of the 1670-space parking facility at Lynnwood City Center has also been affected by the strike, with Ms Farley adding that it may be possible to begin light rail service before this is finished.

No revised cost estimates for the four schemes have been released, although negotiations with contractors are underway and it is believed the delays won’t result in significant budget overruns.

In a staff memo published by the Seattle Times, Sound Transit accepted some blame for failing to audit contractors’ quality assurance and quality control rigorously enough, to find problems earlier. The agency added that identifying new inauguration dates requires further work to resolve project risks, as well as a programmatic review to assess the collective implications. Staffing and safety considerations require the new extensions to be brought into service sequentially, with up to six months of testing before each opening.

Sound Transit Interim CEO Brooke Belman emphasised the complexity of the programme, saying: “No other region of our country has so much transit infrastructure concurrently under construction and preparing to enter service in such a compact timeline.”

“While we are on a path to fully resolve impacts of COVID-19, the concrete delivery strike and our construction challenges, we have more work to do before we can reliably establish opening dates. We will work tirelessly with our contractors to complete these extensions as rapidly as possible without compromising on safety or quality.”

Sound Transit builds and operates transit services for Washington’s Pierce, King and Snohomish counties, home to more than 40% of the state’s residents. In the coming years the Link light rail system will grow from 42km (26 miles) to 100km (62 miles) once all the current projects are completed.