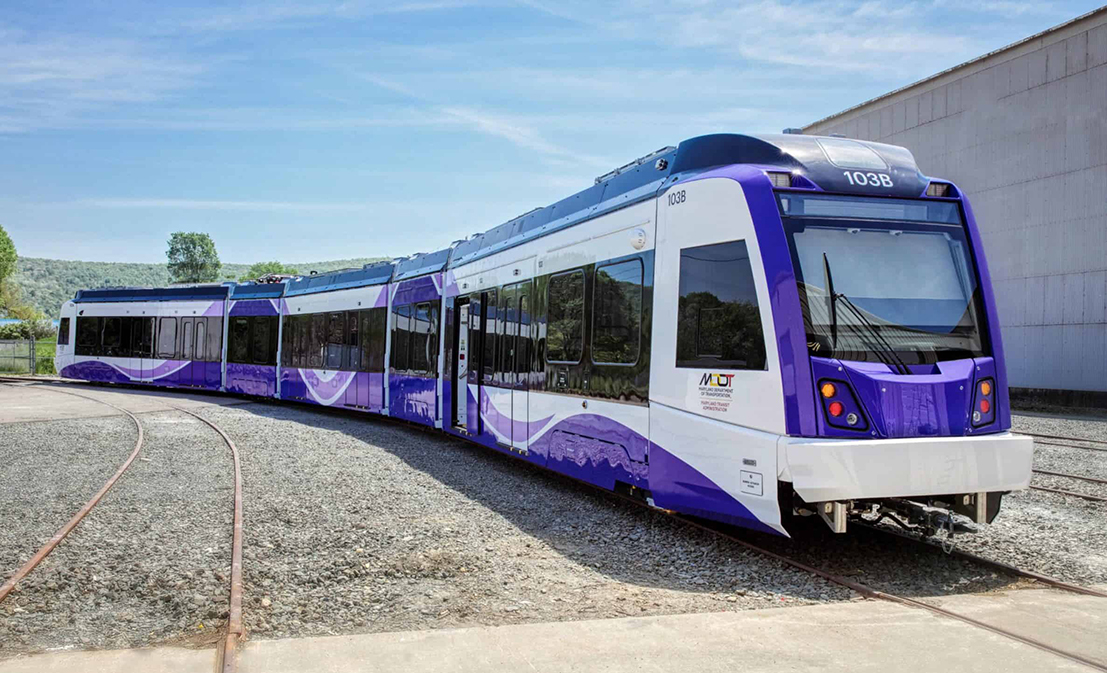 CAF USA is supplying 26 Urbos LRVs for the Purple line under a USD200m contract awarded in June 2016. The manufacturer also holds a 20% share in the operations and maintenance contract for the new line. MDOT

Construction of Maryland Department of Transportation’s (MDOT) Purple light rail line is facing a further seven months of delay, according to a newly-released project report.

The latest issues are related to relocation of several companies’ utilities apparatus, and could push the opening of the 26km (16.2-mile) line, already four-and-a-half years behind schedule, back to mid-2027.

The 21-stop line between Bethesda and New Carrollton was originally scheduled to carry passengers in 2022-23, but has faced numerous delays, legal and financial disputes.

In August last year a new consortium restarted work at sites which had lay dormant for almost two years following the decision by the original design-build Purple Line Transit Partners (PLTP) partnership to leave the project in September 2020, just over three years after starting work in August 2017.

PLTP claimed unreasonable deviations to the project which caused delays and unfunded overruns, adding a reported USD519m to the total cost. State officials took over project management and utilities relocation while court cases continued, eventually reaching a USD250m settlement at the end of 2020.

However, when Maryland Transit Solutions – a consortium of Dragados and OHL – were appointed in early 2022 the state-managed works were already behind schedule, according to reports. Original equity partners Meridiam and Star America remain involved in the project.

A map of the Purple line in Maryland. TAUT

A statement from MDOT said that the “contractual deadline” for the line’s launch has not changed and that the agency is looking into measures to speed up work and “achieve greater efficiency”. This includes revising plans for roadway construction zones, improving co-ordination amongst utilities, and carrying out more elements of the project concurrently.

The Purple line’s escalating costs and repeated delays have drawn national attention as it is one of the first US transit projects to be delivered under a Public-Private Partnership.

> A detailed description of the Purple line project, including a timeline of events, appeared in TAUT 1009. Click here to request a copy of this article.