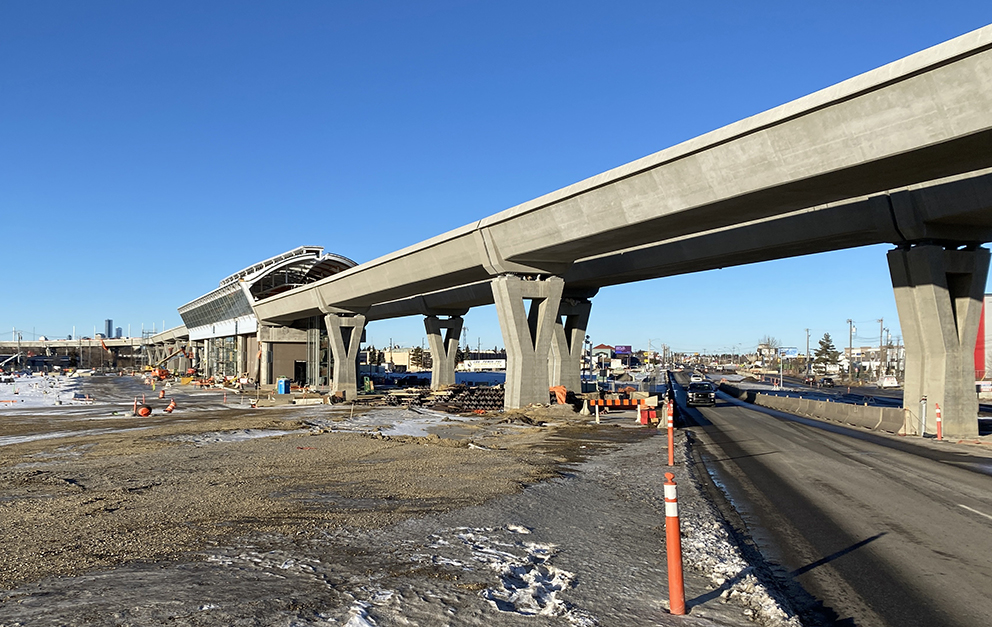 A revised inauguration date for Edmonton’s Valley Line Southeast LRT is awaited after TransEd Partners confirmed that works are required to address cracks in the supporting columns for the new route’s elevated sections. J. Woodhead / CC BY 2.0

The planned September opening of the 13.1km (eight-mile) Valley Line Southeast LRT project in Edmonton, Canada, has been postponed following the discovery of cracks in concrete support columns for the line’s elevated sections.

The confirmation from construction consortium TransEd Partners is the latest delay to the CAD1.8bn (EUR1.3bn) line which will carry passengers from downtown Edmonton to Mill Woods. Originally planned to open in late 2020, other delays have been ascribed to weather-related issues in 2019 and the COVID-19 pandemic in 2020-21.

Cracks in about 40% of the concrete piers were discovered in mid-July by city inspectors; subsequent investigations by TransEd found issues with 18 of the 45 supports.

Ronald Joncas, CEO of TransEd Partners, told a press conference on 10 August: “On behalf of TransEd, I want to say how disappointed we all are, and we deeply regret the inconvenience this unfortunate and regretful delay may bring to Edmontonians and others in the region.

“But please be assured that we are doing all that we can to find the most efficient solution to deliver a safe and reliable LRT line at the earliest possible time.”

Mr Joncas added that the consortium is planning to strengthen the piers rather than replacing them, noting that “there will be no sacrifice on safety, quality [or] on the pier lifespan as they are being strengthened.”

In 2016, the City of Edmonton entered into an agreement with TransEd Partners (Bechtel, EllisDon, Alstom, and Fengate Capital Management) to design and the line, also handling operations and maintenance for a period of 30 years.

A fleet of 26 Canadian-built Bombardier Flexity low-floor trams will operate the service; these have been testing since late 2019.

The second stage is the Valley Line West which will take the route from the city centre to Lewis Farms (14km/nine miles) via Glenora and the West Edmonton Mall. Marigold Infrastructure Partners, a joint venture of Colas and Parsons, is designing and building this phase under a partial P3, and this time the City has ordered low-floor cars from Hyundai Rotem, with deliveries scheduled from 2025.

The Albertan city of Edmonton opened Canada’s first light rail system of the modern era on 22 April 1978, and has since developed a 24.3km (15.1-mile) network worked by Siemens high-floor LRVs.