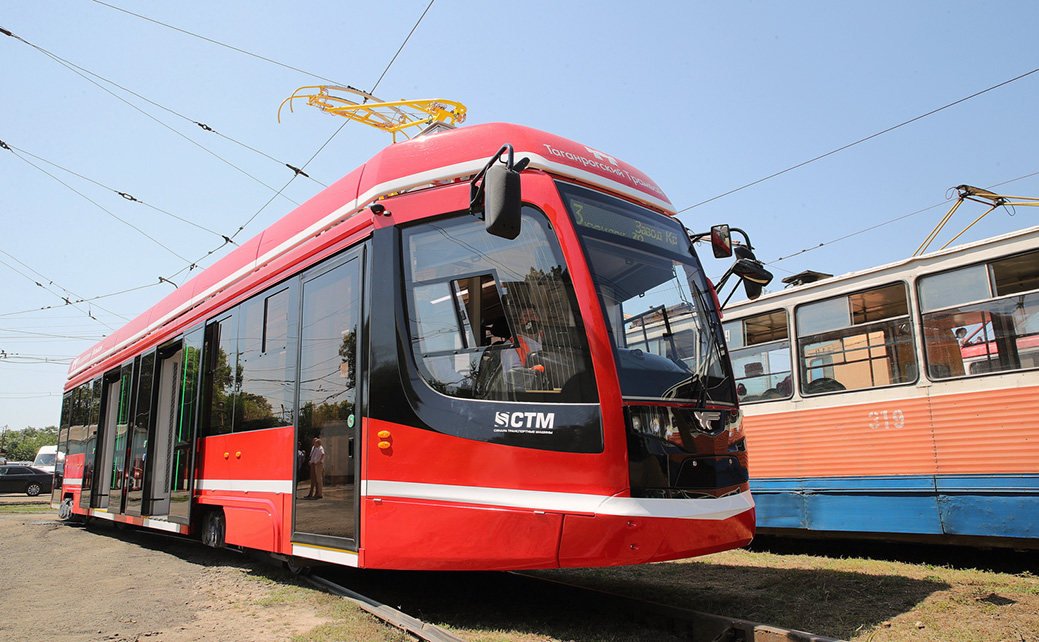 UKVZ is delivering 60 four-axle low-floor tramcars to Taganrog, the first of which arrived in 2021. Donland.ru / CC BY 4.0

Russia has more tramway systems than any other country, but many are in a poor state of repair due to a lack of investment since the dissolution of the Soviet Union in December 1991 (when everything was centrally controlled in accordance with a five-year plan). Some networks ended up in private control as the industrial complexes they were built to serve were privatised, but many of these have since been transferred onto the hard-pressed municipalities.

Addressing the urgent need to modernise, recent years have seen the rise of public-private partnerships where private investment for reconstruction and re-equipment is paid back over multi-multi-year concession periods by the municipality or regional government.

The city of Taganrog (population 249 000) was one of the first to go down this route, with a concession agreement signed with the Sinara Group in May 2021. The first modernised route (3) was introduced in September 2021, with a second launched in April 2022; 45km (28 miles) of track have been modernised and 60 UKVZ 71-628 trams delivered thanks to an investment of RUR11.84bn (EUR196m) raised mostly through credits from the VEB.RF state development corporation.

Two more PPP agreements have been signed in the past month. In the city of Lipetsk (population around 508 000) a 20-year concession has been agreed between the city, regional council and Movista-Regions that will enable modernisation of the tram depot, renewing 40.8km (25.4 miles) of track, construction of 5.2km (3.2 miles) of new route and the supply of 46 low-floor bogie trams. All should be completed by the end of 2025 under the RUB13.8bn (EUR228m) project, with depot upgrades complete in 2023 and the first low-floor trams running in 2024. Municipal operator OTS-Lipetsk will be retained as the operator.

In Nizhniy Novgorod (formerly Gorky) a 25-year concession has been signed with the regional government and Ecological Projects LLC that will include modernisation of 149.3km (92.8 miles) of infrastructure, three depots, 15 new substations, and the supply of 170 trams in 2023-26. In the historic centre of the city, 39km (24.2 miles) of tracks will be laid on modern anti-vibration pads to improve the ride quality and reduce noise.

The concessionaire will invest RUR35.9bn (EUR593.4m), but will be paid RUR126.5bn (EUR2.09bn) over the term of the agreement. There will also be a RUR15.1bn (EUR245.9m) subsidy from federal/regional sources. The trams will be supplied by Russian-Belorussian joint venture Nizhekotrans, which will see investment from Belkommunmash of Minsk to provide a new design of low-floor car which will be built in a new plant in Vorsma, 65km (40 miles) to the south-east of Nizhniy Novgorod.

Another city that has signed up with Sinara is Krasnodar, which has plans to double its tramway network by 2029. The company will build 71km (44 miles) of new lines in the west of the city and deliver 100 low-floor trams at a cost of RUR284bn (EUR4.7bn).

A down-payment of RUB350m (EUR5.8m) from the regional and national government will start the expansion in the western part of the city, with the balance funded through the concessionaire, regional and federal grants. The first 40 trams are expected to arrive in 2024, with revenue operation on the first sections of new route to begin in early 2025.

Separate documentation is being prepared for an agreement to cover expansion in the eastern suburbs, including the provision of a new depot with capacity for 150 low-floor trams. Municipal tramway and trolleybus operator MUP KTTU will remain as the operator.