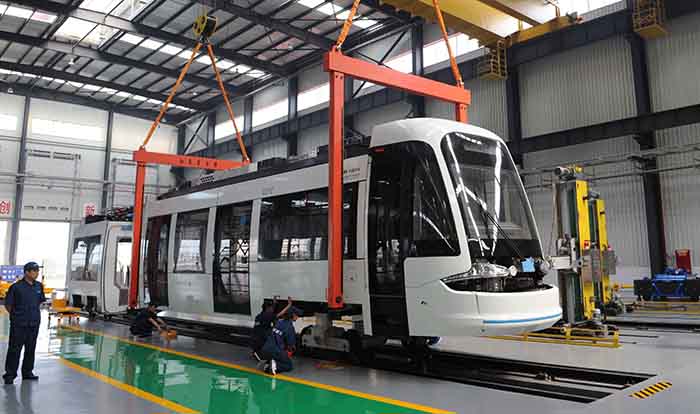 It is understood that the new low-floor trams for Chengdu's tramway are being built under a co-operation agreement between a local heavy engineering manufacturer and Siemens. (Image: Xinzhu Corporation)

Firstly a brief round-up of systems that opened in 2014:

In the US, the Atlanta Streetcar opened on 30 December, with Washington DC and the Oak Cliff streetcar in Dallas postponed going into revenue service until 2015.

In China what constitutes ‘opening’ varies from city to city, so it is not certain whether normal revenue operation in Chengdu, Guangzhou, and Nanjing started in 2014. Suzhou certainly did achieve this goal, on 26 October, just 25 months after ground-breaking.

In Europe, Aubagne and Besançon opened during 2014; Paris lines T6 (rubber-tyred) and T8 (steel wheel) followed in December, so it will probably be late 2017 before we see another new French tramway.

We have already commented on the difficulty of forecasting when things will happen in Brazil, so we will just say that it is possible that passengers will be riding trams in Cuiabá and Santos in 2015.

There is no doubt that the pace of tramway and metro construction in China is mirroring its ambitions in high-speed rail with new schemes and extensions seemingly announced each month.

Beijing is building the 9.4km (5.8-mile) Xijiao tramline to link Bagou station on metro line 10 with the Fragrant Hills in the western suburbs, to include 4.4km (2.7 miles) without overhead wire. This will feature the Ansaldo STS Tramwave surface power supply system, and the line will be worked by part of a batch of 31 five-section 100% low-floor air-conditioned trams ordered from CNR Dalian and built under licence from AnsaldoBreda based on the Sirio design.

The Beijing line is expected to be the first in a network of lines and is scheduled to open towards the end of 2015.

Chengdu in south-western China is the capital of the Sichuan province and already has a two-line metro. The city started building a 20.2km (12.6-mile) tramline in June 2013 and expects to start commercial operation in June 2015.

Guangzhou’s Haizhu tramline is 7.8km (4.8 miles) long and links Wanshenwei and Guangzhou Tower, both termini offering metro interchange; it is to be operated by Guangzhou Tram Company Ltd, a subsidiary of Guangzhou Metro Corporation.

The tramway may be operating by the time this is published, as no official inauguration date has been given but infrastructure construction is complete.

Huai’an in Jiangsu province is reported to have built a 20.3km (12.6-mile) tramline with opening planned for February 2015.

The city has hitherto been served only by bus services and is a stopping point on Beijing – Nantong trains.

Nanjing, an inland port on the Yangtze river in Jiangsu province, has an existing two-line metro. The Hexi tramline started trial operation last summer, driven by the need to provide transportation for the Youth Olympic Games, but then closed to permit completion of the 7.8km (4.8-mile) route that provides interchange with metro line 2. More lines will follow.

CSR Puzhen is supplying a fleet of 15 32m 100% low-floor trams, built under licence from Bombardier and based upon its Flexity platform. If commercial operation did not start before the end of 2014, then it certainly will in early 2015.

Qingdao is a major seaport in Shandong province that is building an 8.8km (5.5-mile) tramline in Shenyang district with the expectation that revenue service will start in 2015. Construction is also in progress on 54.7km (34 miles) of metro, with the first line expected to carry passengers before the end of 2015.

In Shenzhen, construction of two tramlines began in December 2013, designed to integrate the north side of the Longhua district into the city’s rail network. An 11.5km (7.1-mile) north-south line will link Qinghu metro station to the New Industries Park and Science and Technology Service Centre. The second line will be a 3.8km (2.4-mile) branch from Guanlan New Industry Park to Daha Road. Completion in 2015 is possible, but no rolling stock details have been announced yet.

Wuhan, the capital of Hubei province is building a 17.6km (10.9-mile) tramline linking with metro lines 3 and 6 in the south-west, connecting Zhuanyang Avenue and Huanglingzutuan. The city has been in talks with CSR (China South Locomotive and Rolling Stock corporation) to build a local tram factory, but further details are not known. Little further information has been published, but local sources predict opening in 2015.

Zhuhai, a coastal city in Guangdong province in the Pearl River delta, is building an 8.9km (5.5-mile) tramline from Sangchong to Haitan Park via the railway station, for completion in May 2015, and is already testing part of the line with two double-ended low-floor Sirio trams imported from AnsaldoBreda in Italy; ten more will be built under licence by CNR in Dalian.

Two more lines are planned to follow with preliminary engineering reported to be underway (TAUT 925); this initial ring network will then be complete, opening in 2016.

Medellín is the second-largest city in Colombia. Financing for the Ayacucho tram project was announced in 2011 and the contract for the 4.3km (2.7-mile) line went to New Translohr, which has delivered 12 STE5 rubber-tyred vehicles. The first vehicle was delivered in July 2014.

The USD350m line was built using a USD250m French loan and is a feeder to San Antonio station on metro line B from the Alejandro Echavarria neighbourhood. Alstom has supplied the electrification as well as the vehicles. Testing is in progress and the line is likely to open in the third quarter of 2015.

The total cost of the project is USD475m, 85% financed by a loan from a Chinese bank. The infrastructure work has been carried out by China Railway Engineering Corporation (CREC), with elevated sections to avoid the city’s notorious traffic congestion.

In August 2015 CNR Changchun rolled out the first of 41 70% low-floor trams, and in November it was announced that a five-year contract to operate and maintain the system had been awarded to CREC/Shenzhen Metro Group. Operational testing is in progress with the intention that passengers will be carried around the middle of the year.

Palermo is the capital city of Sicily, and although construction of a tram system started in 2007, and rolling stock was delivered three years ago, it seems that only part of the three-line modern tramway will be carrying passengers in 2015.

Line 1 runs 5.6km (3.5 miles) from Stazione Centrale to Roccella (Forum Palermo) with a depot near the latter terminus. Lines 2 and 3 form a separate network with a depot near Castellana. The first tram was officially launched in the city in July 2014 and testing on the full length of line 1 has been ongoing since then, with electrification of sections of line 2 and 3 reported to be underway in December. One local source says that line 1 could open in February.

Granada abandoned its first generation tramway in 1971 but the population of the urban area has since grown to 473 000 and authority for a new EUR360m tramline came in 2006 with construction starting in April 2007.

Termed Metro Ligero, the 15.9km (9.9-mile) north-south line has been delayed by financial problems, but will link Jacobo Camarero and Poniente via the city centre this spring. There is a 2.7km (1.7-mile) subway under the old town.

Kaohsiung, Taiwan’s second city, is a major port on the south-west coast. The first stage of the city’s light rail system will be an 8.7km (5.4-mile) line on the alignment of the harbour railway, due to open on 1 October 2015, with service provided by 34.2m CAF Urbos 3 100% low-floor trams. In 2019 the line will be extended to form a complete loop with 24 trams available for service.

Dallas. The third-largest city in Texas is unusual in having a variety of rail transit modes, including light rail, diesel light rail and two separate streetcar lines. The second tramline, whose opening was delayed from 2014 to 2015 is the Oak Cliff Streetcar, a USD56m, 1.6km (one-mile), starter line linking Union Station with Oak Cliff Methodist Hospital.

The line crosses the historic Houston Street bridge, where there will be no tramway overhead. What is potentially the first off-wire tramway operation in the US will be offered by two 20.3m Liberty bogie trams from Brookville Equipment with battery equipment.

Seattle (First Hill). Located in the Pacific north-west state of Washington, Seattle is another city with three separate operations, one light rail line and two tramways. It is one of the latter, the 4km (2.5-mile) USD134m First Hill Streetcar, that is due to open in the first quarter of 2015.

The First Hill line connects Capitol Hill and the International District and will be operated by King County Metro. First Hill was originally to have a station on the Sound Transit LRT extension, but the deep-bore facility was dropped.

Planning is in progress for a new line to connect the First Hill and South Lake Union tramways in the city centre.

It is understood that the new low-floor trams for Chengdu’s tramway are being built under a co-operation agreement between a local heavy engineering manufacturer and Siemens. (Image: Xinzhu Corporation)

With technology already demonstrated to a worldwide audience at the InnoTrans trade fair in Berlin, CSR’s new low-floor trams for Guangzhou are capable of running almost entirely under supercapacitor power. (Image: CSR)

One of the first NTL vehicles for the new tramway in the Colombian city of Medellin was shown off to the public by the city’s mayor in July 2014 on the back of a trailer. (Image: Y. Maller)

Inekon is building the First Hill trams in the Martinov workshops of the Ostrava tramway. (Image: Inekon)