OKC Streetcar: A new chapter in the Cinderella story 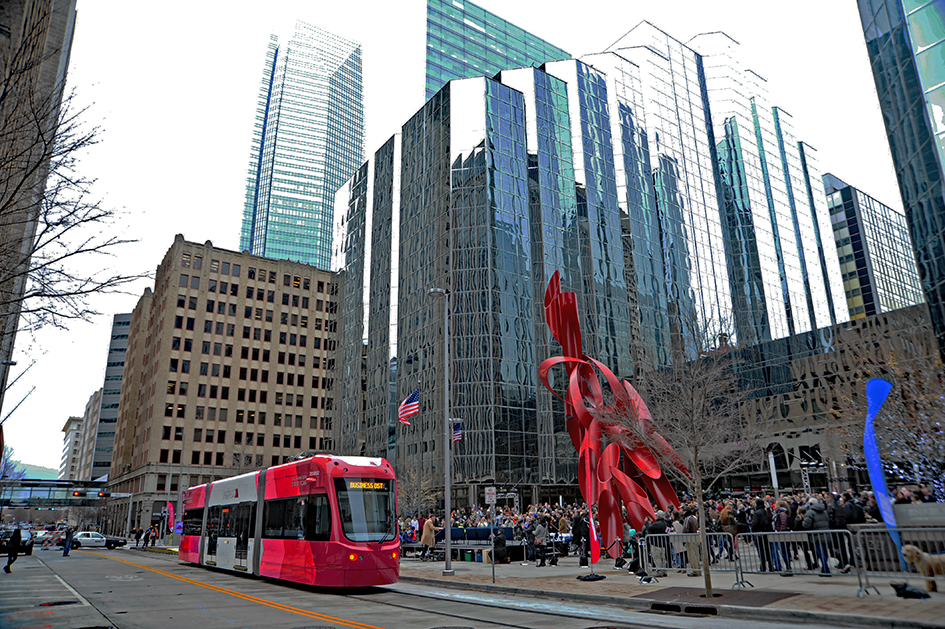 Brookville Liberty 201802 was the launch car on 14 December. A large crowd gathered at Leadership Square for the opening celebrations.

On 14 December 2018, Oklahoma City opened its 7.4km (4.6-mile) streetcar line to passengers, returning electric traction to what has become known as ‘The Cinderella City’ for the first time in
72 years. In so doing, the state capital became the last of four cities across the US to form an unusual quadrumvirate – joining Milwaukee (2 November), El Paso (9 November), and St. Louis’ Delmar Loop Trolley (15 November) to open new urban rail lines within a period of only six weeks. That has to be a first in modern US transit history.

The USD136m Oklahoma City (OKC) Streetcar was officially a component of the MAPS (Metropolitan Area Projects) 3 civic improvement project, approved by voters in 2009 with a one-cent sales tax increase. The programme financed the streetcar as part of the ‘Fixed Guideway Transit’ initiative,
but also included improvements to public parks, a new convention centre, and better walking and cycle routes to improve the quality of life for both residents and tourists alike. All of these will be connected to downtown attractions, dining and nightlife via the OKC Streetcar.

The sales tax was projected to raise USD777m by the time it expired on 31 December 2017, but in reality saw more than USD820m added to the city’s coffers. As such, the streetcar has required no federal funding and has left the city debt-free.

Then-Mayor Mick Cornett launched the streetcar’s construction phase at a ground-breaking ceremony on 7 February 2017. Works were completed in October 2018, giving an impressive record of delivering new infrastructure and an all-new service in under two years. A joint venture of Herzog and Stacy & Witbeck managed the construction of the new lines, with ADG, Jacobs Engineering, AECOM and SOJ providing consultancy services.

Yet as much as the OKC Streetcar is a transport project, it is also seen as a key driver for urban regeneration and continuing the city’s ‘Cinderella’ story of growth and reinvention. At the opening, Mayor David Holt remarked: “This is a historic day, decades in the making. Our streetcar will be an important economic development tool for our entire city, accommodating visitors and residents alike. It will encourage walkability downtown, answer the question of how residents and visitors will circulate downtown once they arrive and will inspire private investment all along the route.”

A study from Greater Oklahoma City Chamber released in October 2018 claimed that USD1.6bn in public and private investment had already been attracted within a three-block radius of the route that was finalised in 2011. This included residential developments with 1860 new homes, seven new hotels and a net increase of more than 140 000m2 (1.5m sq. ft) of office space.

Such ‘transit-oriented development’ (TOD) is not a new phenomenon in Oklahoma City.
From the city’s origins and expansion during the ‘land runs’ of the late 19th Century, its growth far outstripped the capacity of its urban transportation. With a population that doubled twice between 1890 and 1910, the increasingly crowded streets required a cleaner, safer solution for the movement of residents, visitors and goods. An extensive network of electrified streetcar routes was created to criss-cross the city after the first line opened in 1903, and interurban routes soon extended the system west to El Reno, north to Guthrie, and south to Norman.

Becoming the primary source of transport, the streetcar helped to shape the city’s evolution. Eventually growing into a 222km (138-mile) network, it also bolstered the finances of the private owners who at the same time were buying land at USD100/acre (0.4ha) and selling it on for ten times that amount once it was connected by rail. Farebox revenues alone were never enough to pay for the system’s growth; astute developers were subsidising the streetcars for the development opportunities they would
afford in the future.

The official opening took place at Leadership Square in the city’s downtown. Located in the Business District, the square has two glass towers constructed in 1984. The first car, 201802, rolled up to the festivities, where Mayor Holt introduced the speakers to the several hundred Oklahoma Cityans who attended the celebration. Inside the Atrium, displays depicting Oklahoma City’s first-generation streetcar era abounded. At exactly 11.00, he cut the ribbon, and two balloons showered the assembled crowd with confetti – OKC Streetcar was now in service.

In a thoughtful gesture, and in a departure from the normal practice of lining streetcars up at the celebration point, EMBARK, the transit agency, had staged streetcars at various locations along the Midtown Loop. When the ribbon was cut, these cars were ready to welcome passengers and many were already filled by the time they reached Leadership Square. Service continued throughout the day, with waiting times of around 15 minutes between cars.

The system’s two routes – the Downtown/Midtown Loop and the Bricktown Loop – serve the city centre and connect the Central Business District with the entertainment, Bricktown and Midtown districts, from Joe Carter Avenue to St Anthony Hospital. One-way operation is the rule; no street has a bi-directional service, but the lines are mostly separated by a block’s walk.

Sunday service was trialled throughout January, but in the first six weeks Sunday was shown as the second-busiest day of the week – even with fewer service hours – so this was made permanent on 10 February, running from 11.00-19.00. EMBARK has said that it will be extending operating hours to better match the rest of the week in April.

Free rides were given across the entire system between the opening day and 1 February (extended from 5 January) and the opening month saw over 100 000 passengers carried. Fares are now USD1 for a single ride, with a 24-hour pass costing USD3.

The fleet consists of seven Liberty 20.1m low-floor cars, virtually identical to those now in operation in Dallas, Detroit and Milwaukee and delivered by Brookville Equipment Corporation. They feature air conditioning and free passenger Wi-Fi and each can accommodate 103 passengers, 34 seated.
The first five cars cost USD24.9m, with options for a sixth and seventh exercised at USD4.4m per car. The award to the Pennsylvania manufacturer came in March 2016, following the cancellation of a USD22m initial order with Czech builder Inekon which failed to provide the required financial guarantees.

There are extensive sections where the cars operate wire-free using lithium-ion battery power, necessitated by low clearance under two Burlington Northern & Santa Fe railway underpasses but also continued throughout most of the Central Business District. Unwired ‘detour routes’ are found on
Gaylord Boulevard and NW 5 St.

Herzog Transit Services is contracted for six years of operations and maintenance, based out of a new facility at Southwest 7th St/Hudson Avenue. This undertaking includes a base figure of USD570 000 for preparation and start-up costs, USD3.2m in the first full year of operations, rising to USD3.6m/year if contractual standards and performance targets are met.

Looking to the future

An enhancement under discussion to use a little of the MAPS 3 surplus is a USD450 000 project to give streetcar priority for an additional 21 traffic signals in the downtown area. This would reduce waiting times and provide passengers with greater service reliability and an experience that matches the original goals and expectations. This is deemed to be a critical piece of the jigsaw in terms of achieving the desired 42-minute end-to-end journey times.

It remains to be seen whether the implementation of fares will affect the success of the early ridership, although it is argued that making the service faster and more adherent to the timetable would open it up to more uses for the average rider and help in growing those figures even further.

Network expansion is already in progress. One plan is to eventually reach the State Capitol area further north in Oklahoma City and this may feature on the wish-list for MAPS 4, the next iteration of the programme that has funded much of the city’s renaissance. The rebirth of the streetcar has clearly captured the public’s imagination.

Following the opening, an EMBARK spokesman said: “This is kind of a down payment on a greater transportation system and it’s for all of those individuals who may not understand today why it’s important to them, but it will be in the future.”

As with Milwaukee, El Paso, and especially Kansas City, OKC Streetcar should prove to be a roaring success among American modern streetcar systems.

Grateful thanks are due to Steve Morgan for his additional contributions into this article.