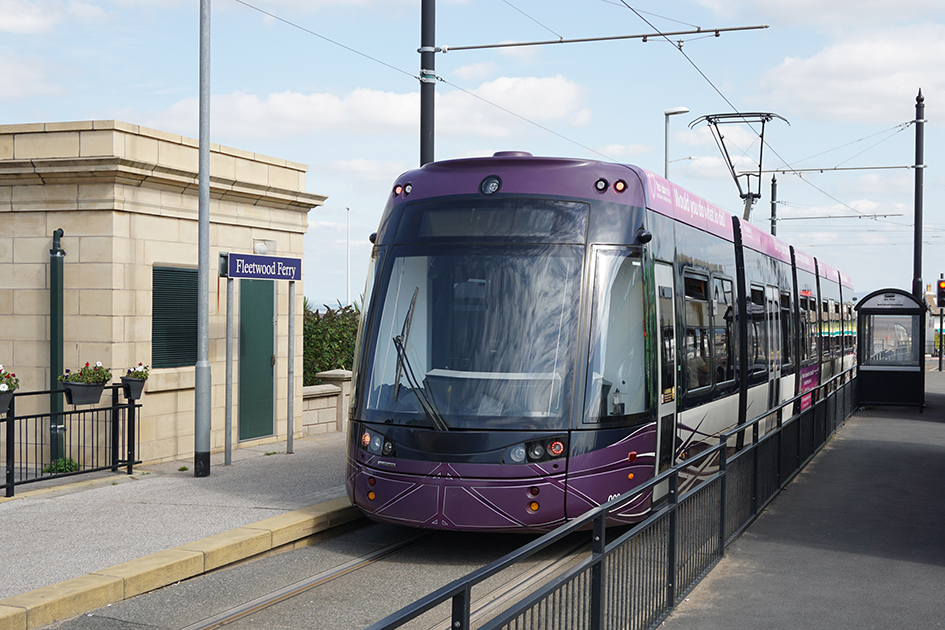 Blackpool’s tramway is a fine example of simple and elegant overhead line installation; note the single wire, traditional finials on the poles and sympathetic construction of the substation at Fleetwood Ferry. Image courtesy of Neil Pulling

The majority of the world’s tramways and light rail systems take their traction power from electricity supplied by overhead contact wires; this has been the primary technology employed for well over a century and is a well-proven system.

In fact, the electric tram is one of the few technologies developed in the 19th Century that has survived essentially unchanged into the 21st Century – it is because of this essential simplicity that it is possible in so many cities around the world to see tramcars built in the 1890s alongside the latest low-floor vehicles.

However, the last two decades have brought a number of emergent alternatives to the overhead contact system and here we shall explore a few of them and their relative advantages and disadvantages.

Modern tramcars still rely on the basic design principles established by ‘the father of electric traction’ Frank J. Sprague in the USA in 1887. Although greatly enhanced over the intervening 130-plus years, the essential components of the traction power system remain largely the same:

• Traction motors, mounted beneath the vehicle, transform this electricity into useful tractive force; earth return is provided by the rails

• Controllers regulate the voltage applied to the motors to give the right speed and acceleration rate. In modern equipment this involves inverters that produce three-phase alternating current of variable frequency and voltage to apply to ac motors. These are smaller and lighter than traditional dc motors, and require a lot less maintenance than the ‘traditional’ dc motor with its commutator.

Aside from these key components, and trolley poles and bows being replaced with pantographs, alongside articulated vehicles becoming the norm, the modern tramcar is still essentially similar to its predecessors. The majority still require a dc feed between 600 and 750V; with the introduction of larger and heavier vehicles, an increase in voltage is generally required.

Looking at the numbers

The purpose of any tram or light rail vehicle (LRV) is of course to carry passengers. A fully-laden vehicle is substantially heavier than an empty one, and an average passenger weighs around 65kg according to UK Department for Transport standards, although this seems a little low to me.

A typical modern tram/LRV has capacity for 220 passengers, these passengers therefore weighing in at just over 14t. The vehicle carrying these passengers has an average weight of about 40t; giving a total of 54t.

The power required to operate the tram in regular service, neglecting auxiliaries, is used for acceleration, overcoming gradients and running at a constant speed.

The power flow of a sample 500m journey for a conventional tram carrying 220 passengers. It accelerates at 1.3m/s/s to 50km/h, runs at this speed for a short time and decelerates again to a stop. Image courtesy of author

As you might imagine, acceleration requires the most power as it takes a lot to move a 40-54t vehicle from a standstill up to operating speed; around 25 times higher than running at a sustained, moderate speed on level track. The power required is calculated using basic Newtonian physics: the tractive effort required for acceleration is the mass multiplied by the acceleration rate, typically 1.3m/s/s, which in this case comes to 70kN.

Rolling resistance – the energy losses experienced through friction and drag, significantly lessened when using a steel wheel on a steel rail (around 10%) compared to a grippy rubber tyre on a high friction asphalt or concrete surface – will be around 2kg/t, giving 1.1kN. (1kg is approximately 10N, although this varies slightly with gravitational variations). Power is effort multiplied by speed; and energy is power multiplied by time.

The controller/inverter will provide a ramp-up of frequency and voltage to the motors, with current limited to give the required acceleration rate, and avoiding overload. The now-universal TBC (Traction and Braking Controller) is pushed into a forward position by the driver to increase speed, pulled back towards ‘neutral’ to maintain a constant speed, and pulled further back to achieve braking. In this region, electrical braking happens down
to very low speed. With ac motors, this happens intrinsically when the speed is, or tries to be, above the synchronous speed of the applied frequency.

Modern vehicles use electrical braking to slow the vehicle, and during this process – also when going downhill – kinetic energy is transformed back into electricity. This is fed back into the line as regenerative braking, and also supplies the vehicle’s auxiliaries. Most dc traction supplies are not capable of feeding back into the ac grid; this could be accomplished, but there are many issues to be overcome and these are not necessarily related to engineering.

Generally, if the line is not receptive – i.e. there are no other vehicles in the vicinity taking power, the voltage will rise. In this case, braking resistors on the vehicle cut in to limit the voltage, and to maintain braking effort. At very low speed, little power is produced, and mechanical braking usually takes over; electrical braking can operate down to standstill, though it will entail needing power at very low speed.

Given the stop/start nature of a tramway or light rail service, a tram or LRV spends the majority of its working life accelerating, running for a short time at a constant speed, and then decelerating to a standstill at a stop or junction. This sequence is then repeated.

It should be noted that no mechanical power is delivered until the vehicle moves, but doing this requires a high current in the motors; tractive effort is largely proportional to current, so a high current is required to accelerate, and this flows through circuit resistance and causes quite high power losses (loss is proportional to current squared).

Consider a typical urban tramway with stops located 500m apart, a speed of 50km/h (31mph) between stops, and an acceleration rate of 1.3m/s/s.

During acceleration, mechanical power input is converted to kinetic energy of around 5MJ. To overcome rolling resistance over the 500m between stops will require 0.51MJ (0.14KWh). Typically, we only see around 30% recovery of energy by regeneration. Why is this so? Firstly, the line is not always receptive, and even when it is, some energy will be lost due to losses in the motors, inverters and line resistance. Accelerating and decelerating requires a high power flow, positive during acceleration, and negative during braking, up to about 1MW, causing very high current in the motors, inverters and the line. This can give losses of around 120kW.

We also have mechanical transmission losses of about 3% due to friction in gears and bearings, giving about another 15kW. These losses also occur under braking, so in total we lose around 3MJ; much higher than the energy actually required to move the tram.

How can we improve things? To begin with, if you introduce a small energy store onboard the vehicle, it would be possible to recover more of the kinetic energy, and any energy losses in the line would be vastly reduced. Supercapacitors are ideal for this purpose; they can handle high power flows, and don’t have the intrinsic lifetime limits of batteries – current thinking suggests a useful life of five to seven years before battery replacement. They will add around 2% cost to the vehicle, and less than 1% to the weight (approx. 300kg) with their control electronics. We should then be able to recover around 50% of the input energy.

We can also reduce the losses in the motors. As explained above, all traction motors today are ac machines, and come in two basic types: asynchronous or synchronous. The asynchronous, or induction, type is the most common, it’s a mechanically simple and robust machine, but does suffer from three major electrical losses: magnetising, and stator and rotor resistance. It runs with the rotor at a slightly lower speed than the synchronous speed of the applied frequency, otherwise known as slip, and represents a rotor power loss, low in proportion at full speed (about 3%), but high at low speed.

A tram operates at high tractive effort and low speed whilst accelerating and braking, so slip loss is considerable. The magnetisation of induction motors also requires current, and this causes extra loss in the stator.

Synchronous motors, if they have permanent magnets, have largely only the stator loss, and so are more efficient, so the overall electrical losses will be halved. They are also smaller and lighter, and can be incorporated into the wheels themselves without gears, removing transmission loss and giving a further weight saving; this enables over 60% energy recovery. They can be operated in two forms, as a synchronous machine, with frequency as the main control parameter, or configured as a ‘brushless dc motor’, in which voltage or current is the main control parameter.

Developments in permanent magnet technology over the last 20 to 30 years have brought considerable weight and volume reductions, and make the permanent magnet motor an obvious choice. It has become standard in automotive use, but the rail industry has been behind the curve in making it a standard item in the same way.