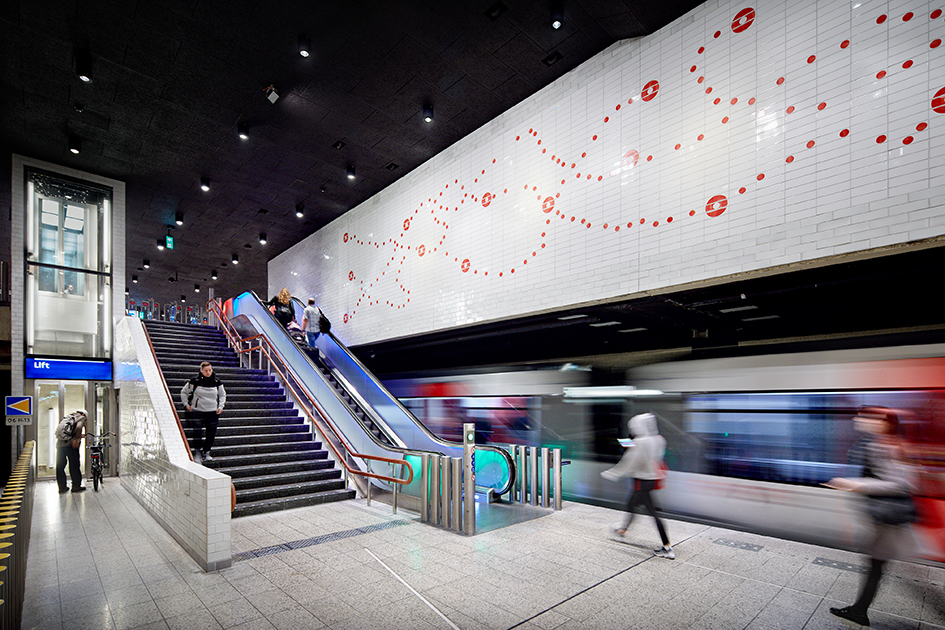 A clean, simple design aesthetic has transformed the passenger environment of the Oostlijn stations.

Amsterdam’s Oostlijn connects the city’s central areas to the new districts in the south-east, running from Centraal Station to Amsterdam-Zuidoost on a partially underground and partially elevated route with 16 stations.

It was the city’s first metro line to open, in October 1977, although various discussions around the desirability of an underground railway for the city had been raised many times before. Serious detailed planning work began in the 1960s and two decades later, the opening of the Oostlijn marked a revolutionary expansion of the public transport network in Amsterdam.

However, while innovative in its early days, piecemeal additions and modifications to the original brutalist design concept, by architects Spängberg and Van Rhijn and typical of the period, had created a legacy of muddled environments.

Renovation of the line’s five underground and 11 above-ground stations would therefore be a comprehensive undertaking; award-winning architectural firm GROUP A and strategic design office Fabrique joined forces for this commission.

After more than 30 years of alterations and additions, both large and small, it became clear that the qualities of the original design had faded considerably. Changes had undermined the line’s cohesion, steadily reducing both passenger comfort and user-friendliness. Time had caught up with the Oostlijn.

The entire route therefore required comprehensive renovation and the design partnership was tasked with creating a new strategy to harmonise the station environments and prepare the Oostlijn for its future contribution to a city in which public transport plays an ever greater role.

The pair took the brutalist architecture as their starting point and made intelligent use of the serial nature of the metro as a coherent system. The original architectural qualities formed the guiding principle in this process.

Elements such as furniture, lighting, advertising and signage were all tackled systematically, with architectural adaptations and carefully-considered interventions which have raised the routeing, safety and appearance to a new level.

The importance of consultation

With the official opening in December 2018, ten eventful years separated the tender award and the completion of works. During that time the project underwent significant developments, with the commission changing and even being put on hold for a period before finally being executed.

Working on such a major public project involves constant consultation and alignment with many stakeholders. It is an undertaking of public interest, which also means a close following from the media, which follows developments critically.

A project with the highest recognition

A project such as this therefore calls for a powerful long-term vision, not to mention an open attitude and a readiness to heed advice and make modifications along the way.

The result meets the needs of both passengers and employees with a fresh yet familiar look that blends into the city in a surprisingly self-evident manner. Metro Oostlijn once again offers pleasant environments with a strong identity. Without denying the original character, but by making the original rough-looking DNA visible and through the addition of contrasting refined materials, a future-proof and comfortable metro line has been resurrected.

That passenger numbers have increased significantly since the re-opening is the best evidence that the most important stakeholder, the passenger, has embraced the project. But there has also been wider recognition, with numerous awards including the NRP Golden Phoenix 2019, the Frame Award 2019 for ‘best governmental interior of the year’, the IF Design Award 2019, the 2ACAA Award 2019, and nominations for the Architectenweb Award for Public Building of the Year 2019, the Amsterdam Architecture Prize 2019, the INSIDE Award 2019 and the European Design Award 2020.

Today, the Oostlijn – as well as the new Noord-Zuidlijn (North-South line) which opened in July 2018 – are a vital part of the city’s transport network: with comfortable and contemporary design that at the same time respects local heritage.

Maarten van Bremen is a founding partner of Rotterdam-based GROUP A, specialists in architecture, interior, urban and product design.