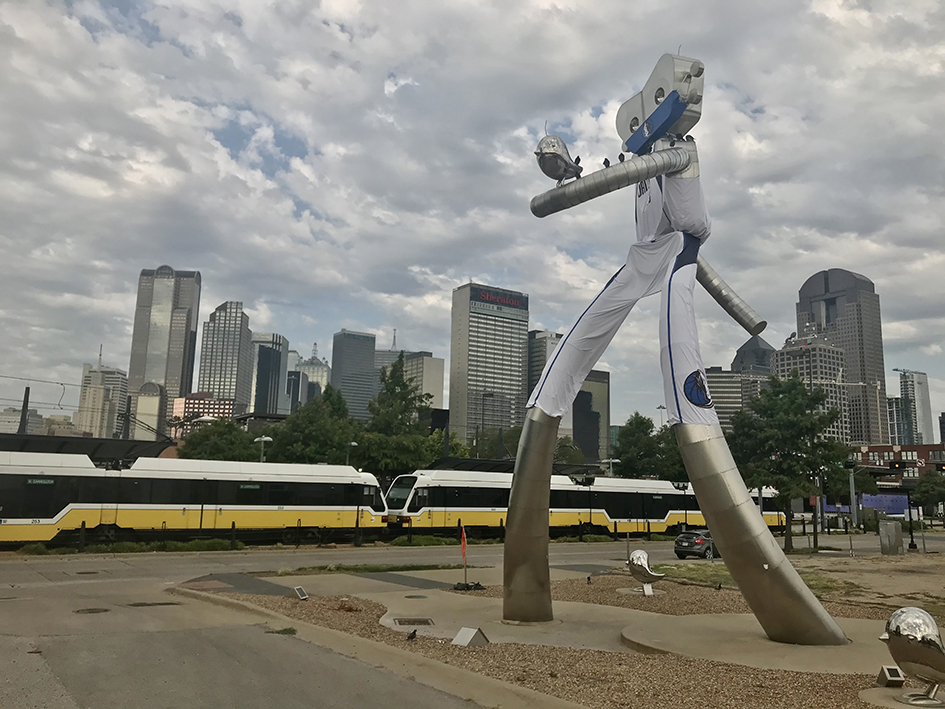 The Traveling Man — Walking Tall is a familiar sight for millions of DART Green line passengers each year. This 40ft (12m) stainless steel sculpture at Deep Ellum station was unveiled in August 2009. Image courtesy of DART

American public transit is flat broke, but maybe not broken.

Across the country, service is being cut to unsustainable levels. Equipment manufacturers are retooling and re-evaluating their operations to keep their employees working and their doors open.

Industry-wide, organisations are reducing their workforces through layoffs, furloughs, and early retirement incentives just to keep the trains running until (or if?) more permanent financial solutions can be implemented and the larger economy can find a post-COVID recovery.

In mid-December, the American Public Transportation Association (APTA) created #SavePublicTransitDay to dramatise the scale of the problem and to make an appeal to Congress for an immediate injection of USD32bn in Federal Government emergency relief. That is on top of the USD25bn in emergency funds released earlier in the year as part of the Coronavirus Aid, Relief, and Economic Security (CARES) Act. That money has already been spent. Agencies, manufacturers and suppliers across the nation took up the cause on 15 December.

This is not a, “Please sir, I want some more” moment. It is a “We MUST have more!” moment and one that is familiar to everyone connected with transit in every part of the world. What is also familiar is that the Government reacted by including USD15bn in a COVID relief package passed in late December, not the requested USD32bn.

And so the funding fight continues.

Looking for leadership… and a leader

The Federal Transit Administration (FTA), a unit of the cabinet-level Department of Transportation, is the agency primarily responsible for public transit. It sets the rules and is the main conduit for funding to transit agencies and state and local governments.

The Federal Government is not the largest source of transit funds, but it is a major one, and having predictable, sustained, and sufficient funding is essential to ensure safe operations and efficient long-term capital planning at all levels of government.

The FTA is led by an administrator, appointed by the President and approved by the Senate. This vital body has been without a permanent leader since 2014, when Peter Rogoff – the administrator at the time, having held the post for five years – was promoted within the Department of Transportation. There have been four ‘acting’ administrators since, including the current one, K. Jane Williams, who has held the position for the entire Trump administration.

While each has worked hard to deliver funds and support transit, what does it say about the commitment of the Federal Government to the industry and the public who make more than ten billion trips a year on passenger rail and buses when it cannot confirm a single appointee – Republican or Democrat – for almost seven years?

Perhaps the inability to approve a sub-cabinet level appointee through two administrations is one of the reasons the Federal Government was unable, again, to complete a scheduled update to the federal funding programme, presently the FAST (Fixing America’s Surface Transportation) Act, that was signed by President Obama in December of 2015 and scheduled to expire this past October.

Fortunately, it was extended just ahead of the deadline, ensuring a continuation of federal funds. That was a less dramatic scenario than the seemingly never-ending extensions of its predecessor, MAP-21, that was signed into law in 2012 and supposed to last for two years. I have forgotten how many extensions it received before it was ultimately replaced by the FAST Act.

It is pretty much a given that American transit advocates will be scrambling to extend the FAST Act again next fall, or still be working through the details of its successor.

In his selection of former South Bend, Indiana, Mayor and one-time rival for the Democratic presidential nomination Pete Buttigieg to be Secretary of Transportation, president-elect Joe Biden acknowledged the interplay of transit and economic health. “This position stands at the nexus of so many of the interlocking challenges and opportunities ahead of us,” the new President said. “Jobs, infrastructure, equity, and climate all come together at the DOT, the site of some of our most ambitious plans to build back better.”

On the surface, that is the kind of generic verbiage one may have expected. It recognises the complexity of the DOT, which oversees highways, airlines, all railroads, pipelines, even maritime administration, in addition to transit. It is a massive, complex agency with 55 000 employees. But dig a little deeper into the traditional Washington perception of the value of transit – it exists to take care of those who cannot buy a car – and the Biden statement may be evidence that the incoming administration sees transit through new eyes. It is, after all, a multi-billion dollar industry, both sustaining and creating jobs, rebuilding communities, and creating new ones – all while also performing the vital service of taking people where they want to go.

In any event, short-term pain, and the long-term consequences of COVID notwithstanding, the Federal Government – both executive and legislative branches – must get its act together and develop a meaningful funding solution. Transit agencies were struggling before COVID. Their ability to make long-term plans, the kinds required to develop needed new corridors and replace ageing fleets and infrastructure, is simply impossible without it.

With the COVID vaccine deployment underway, a new round of stimulus funding approved, and a new administration in place, the transit industry in the US has reasons for hope. But recovery will take time, certainly longer than it took to hit bottom – that is, if one can say the bottom has indeed been reached.

Looking down the tunnel

It is hard to know how much ridership will ultimately recover. The length of the COVID problem has given time for companies to re-evaluate their use of office space and the need to have employees on their premises.

Having navigated the Zoom dress code, rearranged the furniture and secured the required technology to work from home, staff are reconsidering their desire to return to the office which, in turn, may stifle the full restoration of transit use. People who previously found it cheaper to take transit five days a week than drive and park a car may not see the same benefit if they only have to go into the office once or twice a week.

Of course, money, whether from actual cash injections or new financing approaches like an infrastructure bank or an enhanced Build America Bond program is essential. Fortunately, both Biden and Buttigieg have touted expansive mobility investment as key priorities, both during their campaigns and since taking the reins. It will be truly refreshing if they are able to fulfil their promises.

Still, the broader economy remains unsettled, and many transit agencies that rely on local sales taxes as their primary revenue stream are working through massive financial losses that will require years to recover. All of this affects service delivery and expansion plans.

As a transit user, it is still hard to grasp the reality that the New York subway no longer runs all night, or the possibility – as of writing this in late December – that weekend rail service on the Metro in Washington, DC goes away.

Trust as a foundation for recovery

The good news is that transit users say they plan to eventually return. Their reasons for leaving vary; stay-at-home orders, business closures or family illness are most often cited. To be sure, some have expressed concern about exposure to the virus while riding, but there has been no serious research in the US validating this worry and transit agencies have gone into overdrive with enhanced cleaning regimes.

Agencies have also wisely invested equal effort in communicating the extra steps they are taking to ensure cleanliness. Many, if not most, have developed extensive outreach programmes, including ambassadors who soothe worried passengers, demonstrate cleaning procedures and new riding requirements, and, in some cases, explain short-term route and schedule adjustments.

The Washington, DC-based social media data research firm AlphaVu looked at the willingness to return in a survey conducted in the summer of 2020. In addition to overall support for transit remaining high, they found people confirming their intention to return when they felt it was safe and when a vaccine was developed. They also said that seeing transit staff busy cleaning vehicles and facilities – and knowing the steps agencies are taking to test and keep their workers safe – would positively influence their choice to return.

Support remains high among voters, too. APTA reports that in 2020 more than 90% of all transit referenda across the US passed. That suggests people see the value in a solid transit system and are willing to invest in it. Put simply, they trust transit and want more of it.

Trust is always a factor in making the decision to ride. Passengers get on board because they have confidence they will be taken to their destination reliably and safely. COVID has no doubt altered the safety calculation, but based on their previous experience, as well as the need to be mobile, they are at least saying they plan to return. Truly, time will tell. But operators must do everything possible to honour their trust if they want to get to a ‘new normal’ and retain support for programme expansion.

Voters have spoken. Riders have set the terms for their return. Those terms are being met. It is up to the industry to keep honouring those terms and earning that trust.