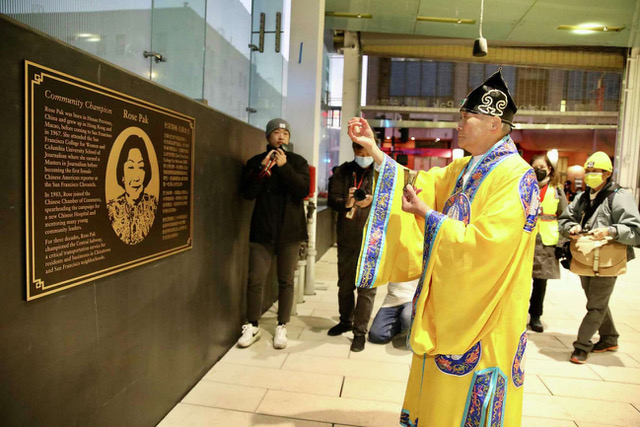 The Reverend Norman Fong blesses the plaque commemorating Rose Park, a driving force behind the creation of the Central Subway to San Francisco’s Chinatown. Image courtesy of V. M. James

Starting at 08.00 on 19 November, San Francisco’s highly anticipated Central Subway was opened for a weekend shuttle service between 4th/Brannan and Chinatown-Rose Pak. Served by the Muni Metro, the subway has two intermediate stations at Yerba Buena and Union Square (for transfer to BART and the Market St subway). Trains ran every 12 minutes 08.00-00.00.

Community events and free rides are to take place in November and December before the planned launch of a daily service from 7 January. At that point line T (Third) from Sunnydale is be diverted through the subway in time for the Lunar New Year celebrations in Chinatown. The K line is also to be revised to terminate at Embarcadero and the N line at 4th/King (for transfer to line T).

Planning for the Central Subway project started as long ago as 1993, with construction of the 2.5km (1.6-mile) subway beginning in 2010 after approval by the US Federal Transit Administration (FTA).