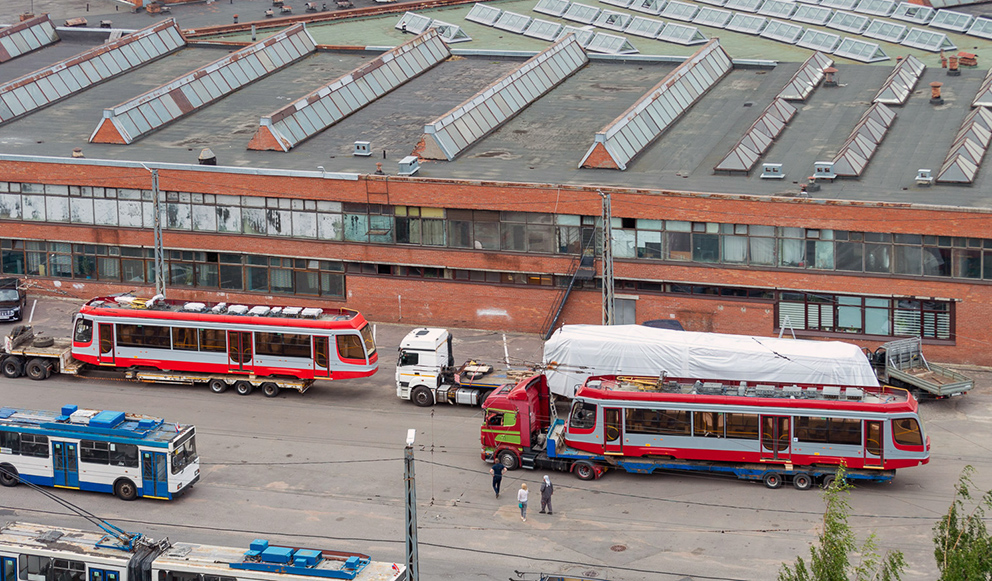 Ex-Sankt Peterburg 71-623 trams being unloaded in the Donetsk city of Yenakiieve. A. Khartinovo

The city of Yenakiieve (Russian: Yenakievo) has received a further six Ust-Katav 71-623 four-axle bogie trams from Sankt Peterburg, delivered by road at the end of August following a seven-day journey from Russia’s second city.

Yenakiieve, population 77 000, is in the Donetsk Oblast between Donetsk and Luhansk, and has been under the administration of forces allied to Russia since 2014 – and recognised only by Russia since February 2022. The latest delivery is the first of Russian trams to this part of Ukraine since the occupation took effect in February.

An important centre for coal mining, metallurgy and the chemical industry, the city was known as Ordzhonikidze from 1937 until 2002. In order to serve the needs of industry, a tramway was built in 1932 and in 2022 three lines across a 32.7km (20-mile) network are operated with 16 trams, mostly the KTM-5M3 type dating back to 1976 although these are now in poor condition. Three 71-623 trams were delivered by Ust-Katav in 2012.

Sankt Peterburg operated 18 trams of this type in a total fleet of over 600, and the delivery of new cars from PK Transportnye Sistemyin recent years has permitted these odd ones out to be donated to Yenakiieve as a gift of political solidarity.