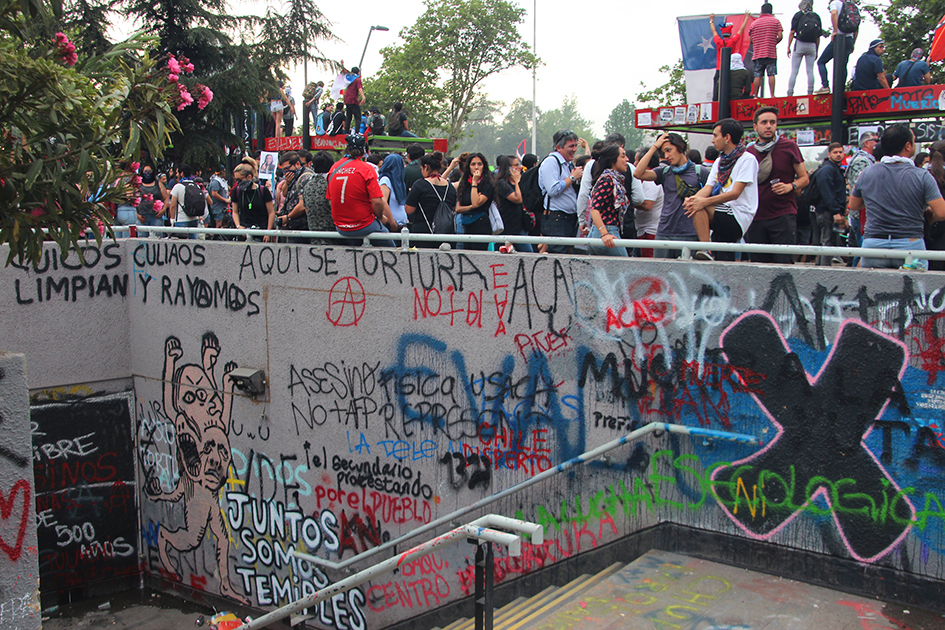 Baquedano station in Santiago offers interchange between lines 1 and 5 of the metro; it was badly vandalised during the October protests. Image courtesy of J. Englart / CC BY-SA 2.0

The reconstruction of Santiago’s Metro following the violent uprisings that swept through Chile in October and November are expected to cost the city EUR339m.

The protests began on 18 October with organised mass fare evasion in response to a proposed 4% peak-time fare increase on the Metro (balanced by reduction in off-peak fares). These quickly spiralled into mass civil unrest related to increased living costs, privatisation and social inequality. Arson, looting and vandalism were seen across the country, leaving 26 dead, an estimated 3000 injured and over EUR1.35bn in losses for businesses. Eighty of the capital’s 136 metro stations were damaged, with 11 described as ‘destroyed’.

Most of the costs are related to system repairs (EUR205.5m), with civil works estimated at EUR95.5m and rolling stock repairs at EUR38m. Seven trains were set on fire during the protests.

Over the weekend of 19-20 October, the entire network was closed for the first time in its history, with line 1 partially reopening on 21 October. This was a priority as the 19.3km (12-mile) line 1 is the network’s busiest and accounts for 36% of the operating income of Metro de Santiago.

By 4 November, six of the seven lines were back in service; all lines offered a partial service by the start of December, although trains were still not stopping at the most damaged stations. Riders complained of delays of up to three hours for some journeys during November and the operator claimed that ridership had fallen by over 50%.

Much of line 4 will have to be “effectively rebuilt”, Metro de Santiago said, expecting works to continue until March 2020 as electrical and signalling systems require replacement.

As the repairs are largely uncovered by insurance, expansion plans are being delayed as a result, with the budget for the coming years being ‘readjusted’. These include the opening of line 7 (25km/15.5 miles Brasil – Estoril), which has been pushed back 11 months to December 2025, while the launch of lines 8
(19km/12 miles Los Leonas – El Peral) and 9 (17km/ 11 miles Santa Lucia – Gabriela) have been delayed by a year to April 2027. Two-thirds of the EUR5.85bn investment in the three new lines is government-financed.

Similarly, the 4km (2.5-mile) expansion of line 4, with three new stations, has been delayed by a year; this is now scheduled for completion in May 2027. Ongoing works on lines 2 and 3
have been affected to a lesser degree, with both projects pushed back to the summer of 2023. Whether these plans will change further remains to be seen however, as transportation budgets face additional pressure from a refocusing of government spending towards social measures as demanded by the population. These include higher basic pensions and an increase in the minimum wage.

Economic growth projections for the country, in decline before October and November’s uprising, have been downgraded as the country’s Finance Ministry has revised its 2019 growth forecast from 2 to 1.4%; the 2020 figure has been revised from 2.3% to 1-1.5%.